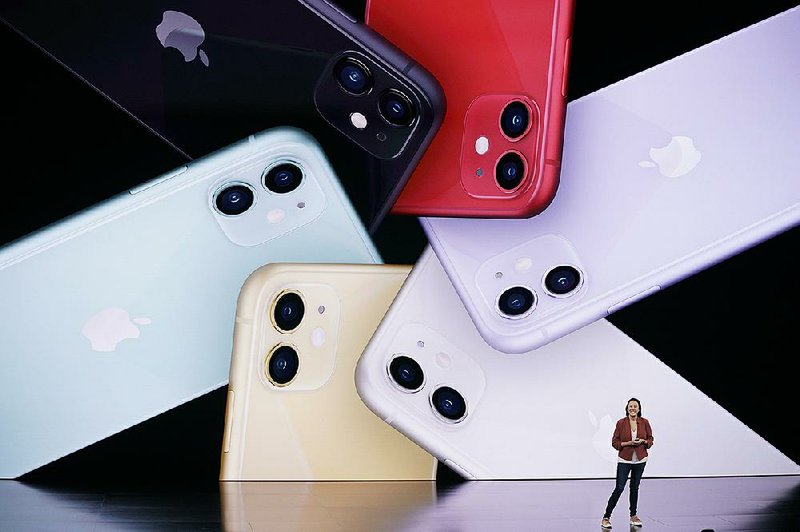 CUPERTINO, Calif. -- Apple on Tuesday unveiled new iPhones that are largely unchanged from previous models and accompanied by an unexpected price cut for the cheapest model.

The company's new models are so similar to last year's lineup, they can be upstaged by Apple TV Plus, the company's upcoming video service, which is being introduced Nov. 1 at $5 per month.

Apple, in fact, is already using the video service to promote iPhones, offering a free year of Apple TV Plus with new device purchases.

IPhone shipments are down 25% so far this year, according to the research firm International Data Corp. That decline puts more pressure on Apple to generate revenue from services such as music and video streaming, games and its App Store. Revenue from services rose 14% to nearly $23 billion during the first half of this year.

[Video not showing up above? Click here to watch » https://www.youtube.com/watch?v=3Dax77YBS5I]

Apple is cutting the price of the iPhone 11 to $700 from $750, the price of last year's XR. The lower prices reverse a trend in which premium phones get more expensive as people upgrade them less often.

The cost cut on the iPhone 11 was unexpected because Apple had been raising prices each year as a way to keep revenue afloat while iPhone sales fell. But Apple might have hit the ceiling this past year. Sales of the two models that began at $1,000 or more were below expectations, causing the company to cut revenue estimates and eventually slash prices in China to increase demand.

Apple Chief Executive Officer Tim Cook didn't have much new to say about the TV Plus service beyond its pricing and service date, although he did show a trailer for a new Jason Momoa-led series called See.

Like Netflix and similar services from Amazon and Hulu, Apple has been lavishing billions of dollars on original programs featuring stars such as Oprah Winfrey, Jennifer Aniston and Reese Witherspoon. The service will launch with nine original shows and films, with more expected each month. It will carry only Apple's original programming, and will be available in 100 countries at launch.

Apple also announced that a new video game subscription service will cost $5 a month when it rolls out on Sept. 19. Called Apple Arcade, the service will allow subscribers to play more than 100 games selected by Apple and exclusive to the service.

The company's new phone models resemble last year's iPhone XR, XS and XS Max. And they have the same design -- with more display space, less bezel and no home button -- that Apple switched to with the iPhone X in 2017.

New iPhone cameras are intended to appeal to the growing number of people who use phones to take pictures of themselves, friends, family and the places they go. The phone's "portrait mode" now also works with pets, not just humans.

With little change, many customers who bought models in the past two years may hold off upgrading this year, analyst Patrick Moorhead of Moor Insights said.

The biggest difference is the phone's camera, an area that Apple and its rivals have all been trying to improve as consumers snap more pictures on their devices. Even there, improvements from year to year have been small.

This year, Apple added an extra camera lens to each model. The two pricier models already have a telephoto lens for better zoom. Now, they will sport a wide-angle lens to capture more of a scene than regular shots.

Even with those additions, the new iPhones may still be catching up with the improvements that rivals have been making to their latest phones.

With its focus on camera tech, Apple is playing catch-up with Google. Google's Pixel smartphones focus on camera innovations including Night Sight, a popular feature for shooting photos in low light, which led critics to conclude that the search giant had used its prowess in artificial intelligence to surpass Apple in camera tech.

Unlike some of the other devices coming out this year, the new iPhones won't support upcoming ultra-fast cellular networks known as 5G. Apple paid billions of dollars to settle a royalty dispute with chip maker Qualcomm in April to gain the technology it needs for 5G iPhones, but those models won't be ready until next year.

Apple detailed the Apple Watch Series 5. The watch's most noteworthy new feature is its so-called always-on display. In previous models, the screen would turn on when the wearer tilted his wrist to check the time.

The new watch uses a display technology previously seen in Samsung phones to keep some pixels activated just to show the time, consuming little power. The screen becomes fully illuminated when the wearer tilts his wrist. Other updates to the watch, including a built-in compass, were minor.

The company introduced a new version of its entry-level iPad, which costs $330. The new model includes a 10.2-inch screen, up from 9.7 inches.

Information for this article was contributed by Michael Liedtke and Barbara Ortutay of The Associated Press; and by Brian X. Chen, Jack Nicas and John Koblin of The New York Times.