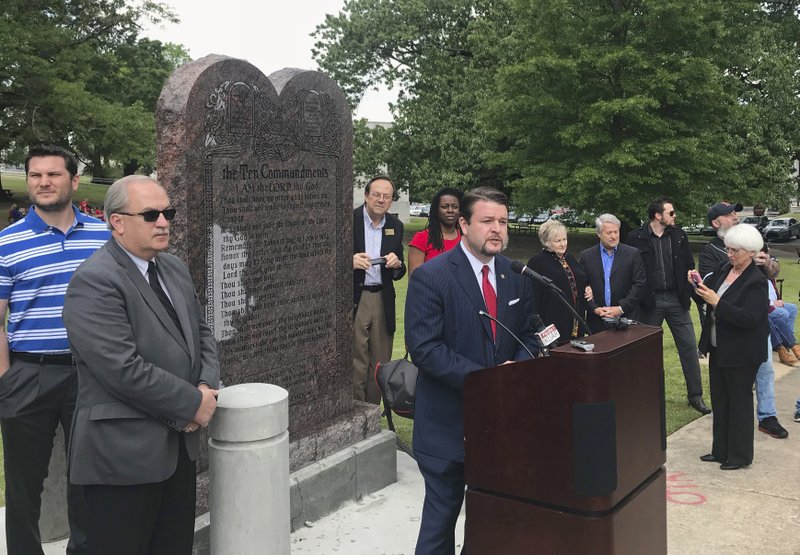 A federal judge is temporarily restricting who can see the video deposition of a legislator who sponsored a measure requiring a Ten Commandments statue at the Arkansas Capitol in a lawsuit challenging the monument.

U.S. District Judge Kristine Baker issued a temporary order Wednesday preventing additional copies of state Sen. Jason Rapert's deposition from being made or distributed. An attorney for Rapert, a Republican who sponsored the 2015 law requiring the privately funded monument, had asked that the video only be available to attorneys in the case.

Rapert's attorney had raised concerns that an edited version of the video could be distributed online to embarrass the lawmaker.

The monument was installed at the Capitol last year, less than a year after a man crashed his car into the original statue.

The legislator who sponsored a measure requiring a Ten Commandments statue at Arkansas' Capitol asked Wednesday that any video from his deposition in the lawsuit challenging the monument only be available to attorneys in the case, citing concerns that it could be used to harass him.

Paul Byrd, an attorney for Republican state Sen. Jason Rapert asked a federal judge to issue an order limiting the use of any deposition video in the lawsuit brought by several groups challenging the monument's constitutionality. Rapert sponsored the 2015 law requiring the privately funded monument on Capitol grounds.

The monument was installed at the Capitol last year, less than a year after a man crashed his car into the original display.

Byrd cited an interview with Rapert that was featured prominently in the documentary "Hail Satan?" and raised concerns that his deposition could be used for "extreme embarrassment and harassment." The deposition was set for Thursday, but Byrd said in the filing that Rapert wouldn't attend.

"Once the videotape is in plaintiffs' possession, there will be nothing preventing them from using it for their purposes, including disseminating it widely on the internet, thereby creating countless opportunities for embarrassing Senator Rapert by cutting and splicing the videotape in as many ways as can be imagined," Byrd said in his filing.

Attorneys for opponents of the monument said the order Rapert is seeking would prevent them from even showing the video to their clients.

"Senator Rapert has shown no legitimate basis for special treatment in this case," they wrote in a filing Wednesday.

The lawsuit is scheduled to go to trial in December.