Bolton ousted after clashes with Trump 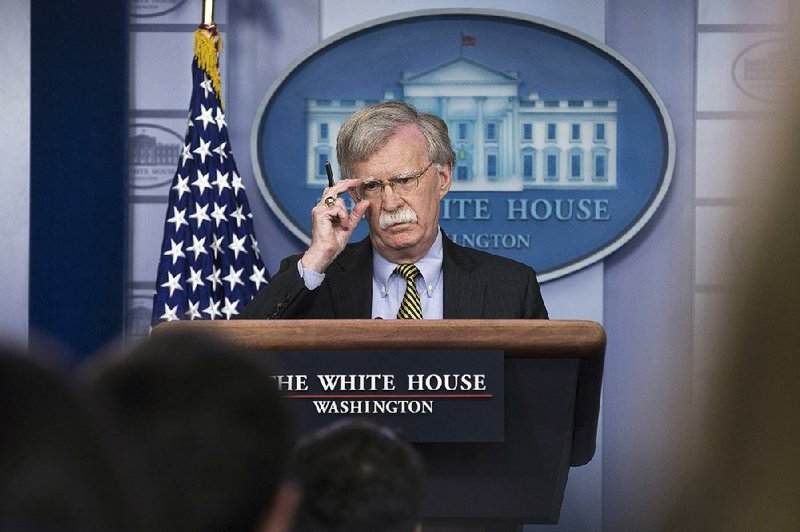 John Bolton, longtime Republican hawk, said Tuesday about his departure as national security adviser: “I will have my say in due course.”

WASHINGTON -- President Donald Trump on Tuesday removed John Bolton, his third national security adviser, after disputes over how to handle foreign-policy challenges including those in Iran, North Korea and Afghanistan.

Trump disclosed the departure in a Twitter message, saying he would name a replacement as early as next week. In the meantime, the White House said Charles Kupperman, the deputy national security adviser, would serve in an acting capacity.

"I informed John Bolton last night that his services are no longer needed at the White House," Trump said. "I disagreed strongly with many of his suggestions, as did others in the Administration, and therefore I asked John for his resignation, which was given to me this morning. I thank John very much for his service."

But Bolton quickly disputed the president's account of their parting.

[Video not showing up above? Click here to watch » https://www.youtube.com/watch?v=CEOtxind8Og]

"Let's be clear, I resigned, having offered to do so last night," Bolton said in a text message to The Washington Post. "I will have my say in due course. But I have given you the facts on the resignation. My sole concern is US national security."

Bolton also responded to Trump on Twitter. "I offered to resign last night and President Trump said, 'Let's talk about it tomorrow,'" he wrote.

Bolton's letter of resignation, dated Tuesday, was only two sentences long. He wrote: "Dear Mr. President, I hereby resign, effective immediately, as assistant to the president for national security affairs. Thank you for having afforded me this opportunity to serve our country." He signed the letter "Sincerely, John R. Bolton."

Tensions between Bolton and other officials have flared in recent months over influence in the president's orbit and how to manage his desire to negotiate with some of the U.S.' adversaries.

While Bolton tweeted that he offered to resign Monday evening, the actual time of his offer was Monday afternoon, in a meeting in the Oval Office with the president before Trump flew to North Carolina for a political rally, according to two people familiar with the discussion who spoke on condition of anonymity to reveal internal deliberations.

Bolton then considered his resignation into Monday evening and gave a short letter to National Security Council staff members on Tuesday, the people said.

A former senior official said acting chief of staff Mick Mulvaney, Secretary of State Mike Pompeo and Vice President Mike Pence concluded that Bolton had leaked internal deliberations surrounding a planned meeting at Camp David last weekend in which Trump would have met with Taliban representatives as a step to ending the 18-year war in Afghanistan. Trump canceled the secret meeting via Twitter on Saturday evening.

Trump was infuriated at the idea that Bolton was trying to make himself look good, the official said.

Bolton has insisted to colleagues and confidants that he had done no such thing. Bolton's allies viewed the accusation as a way to "knife John on the way out," one person close to him said, calling it "flatly untrue."

Bolton had argued against the U.S.-Taliban negotiations for months, saying that the Taliban could not be trusted and that Trump could achieve his chief aim in Afghanistan -- the withdrawal of U.S. troops -- without any agreement with the militants.

Since joining the administration in the spring of 2018, Bolton also has espoused skepticism about the president's whirlwind rapprochement with North Korea and did not like Trump's repeated meetings with its leader, Kim Jong Un, administration officials said.

He also recently became a vocal internal critic of potential talks between Trump and Iran, officials have said.

One Republican familiar with the disagreements between Trump and Bolton said the adviser's opposition to a possible meeting between Trump and Iranian President Hassan Rouhani was a precipitating factor. French President Emmanuel Macron has been trying to broker such a meeting, possibly on the sidelines of the upcoming U.N. General Assembly, in hopes of salvaging the international Iran nuclear deal from which Trump withdrew.

Trump regularly mocked Bolton as a warmonger, sometimes ticking off the names of countries and joking that Bolton would want to invade them, current and former senior administration officials said.

Trump in the past has joked about the perception that Bolton was on thin ice, saying in May that he appreciated hearing Bolton's views even though he often disagreed with them.

"It doesn't matter," Trump said, noting that only he makes decisions.

But Bolton's ouster nonetheless came as a surprise to many in the White House. Just an hour before Trump's tweet, the press office announced that Bolton would join Pompeo and Treasury Secretary Steven Mnuchin in a briefing on an executive order expanding ways to counter terrorism. He did not make an appearance.

Pompeo, who readily acknowledged disagreements with Bolton, told reporters that "the president's entitled to the staff that he wants at any moment."

"He should have people he trusts and values, and whose efforts and judgments benefit him in delivering American foreign policy," Pompeo said.

"There were definitely places that Ambassador Bolton and I had different views about how we should proceed," Pompeo said. Asked whether he was blindsided by the decision, Pompeo said, "I'm never surprised," as he and Mnuchin grinned.

Other potential candidates include Douglas Macgregor, a retired Army officer whose conservative commentary has included praise for Trump's approach on Iran, and Richard Grenell, the ambassador to Germany and a onetime Fox News contributor, current and former officials and outside Trump advisers said.

Macgregor met recently with Mulvaney to discuss the potential of an administration job, two people familiar with the meeting said.

"John Bolton is a brilliant man with decades of experience in foreign policy," he said. "His point of view was not always the same as everybody else in the room. That's why you wanted him there. The fact that he was a contrarian from time to time was an asset, not a liability."

But the departure was applauded by Republicans like Sen. Rand Paul of Kentucky who have tried to push Trump away from foreign intervention.

"The threat of war worldwide goes down exponentially with John Bolton out of the White House," Paul told reporters. "I think his advocacy for regime change around the world is a naive worldview, and I think that the world will be a much better place with new advisers to the president."

"I think fundamentally, President Trump and Bolton have different worldviews," said Paul, a member of the Senate Foreign Relations Committee.

"It's clear to me the relationship had soured, and I hope he'll pick a national security adviser that he has confidence in," Graham said. "But I appreciate John Bolton. I think he sees the world for the dangerous place it is."

Democrats seized on the latest turnover in the administration.

"Today's action by the president is just the latest example of his government-by-chaos approach and his rudderless national security policy," Senate Minority Leader Charles Schumer, D-N.Y., said in a statement. "When Ambassador Bolton's extreme views aren't enough for you, the United States is headed for even more chaotic times."

"This revolving door of American leadership is devastating to our nation's security as our allies now turn to more stable nations -- like China and Russia -- as our foreign policy infrastructure falls apart," he said.

The Iranian government, meanwhile, hailed Bolton's departure, and spokesman Ali Rabiei said it might pave the way for warmer relations. "By dismissal of the biggest supporter of war and economic terrorism, the White House will face less barrier to understand realities of Iran," he said in a tweet. Tehran refers to U.S. sanctions as "economic terrorism."

But Pompeo rejected the idea that Bolton's departure would lead to a shift in approach.

"I don't think any leader around the world should make any assumption that because some one of us departs that President Trump's foreign policy will change in a material way," he said. 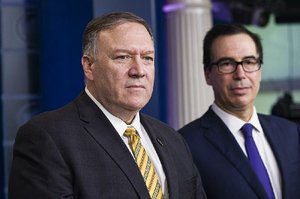 Photo by AP/ALEX BRANDON
Secretary of State Mike Pompeo and Treasury Secretary Steve Mnuchin speak during a briefing on terrorism financing at the White House Tuesday, Sept. 10, 2019, in Washington.