Deterrent to suitors in Musselman deal 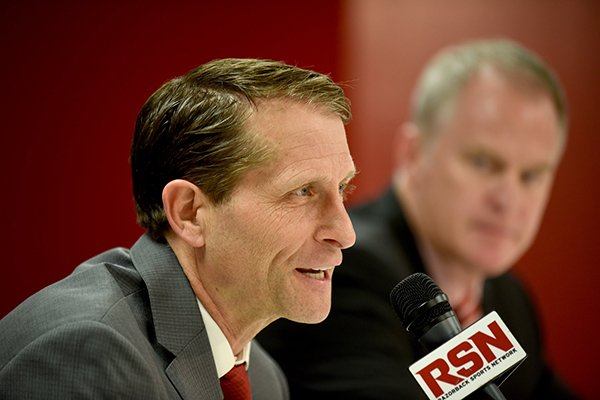 FAYETTEVILLE -- Eric Musselman's contract as the University of Arkansas men's basketball coach has a buyout five times more than what the UA paid to hire him away from Nevada after last season.

Musselman's contract, which was finalized Friday and released via a Freedom of Information Act request, includes a clause in which he will owe Arkansas $5 million if he resigns prior to April 30, 2021.

Arkansas paid $1 million to buy out Musselman's contract at Nevada, which he led to a 110-34 record the previous four seasons, including three NCAA Tournament appearances from 2017-19 highlighted by making the Sweet 16 in 2018.

"First and foremost, I think we have a really special coach, and I wanted to make sure he remains our coach for the foreseeable future," Arkansas Athletic Director Hunter Yurachek said of the hefty buyout. "I think we definitely have one of the best jobs in the SEC, which is one of the best basketball conferences in the country, if not the best.

"So I'm not sure where you'd go from here, but I wanted to make sure whether it's another college team or an NBA team or whatever the case may be, that nobody's going to try to steal Eric from us."

Musselman's annual compensation from Arkansas for the five-year contract, as reported when he was hired, is $2.5 million annually through April 30, 2024. The Razorback Foundation will pay $2 million of the contract with $500,000 coming from revenue from multimedia rights contracts and apparel sales.

Prior to the contract being finalized, Musselman had been working under a letter of agreement he signed when he was hired.

Yurachek said that part of Musselman's agreement is in keeping with other coaches whose contracts recently have been extended, including Dave Van Horn (baseball) and Lance Harter (women's track and field).

"Really for me what that is, I don't want to have to renegotiate a coach's contract every year," Yurachek said. "I want it understood that if we have success, I'm going to reward you for that success.

"That's built-in to your contract, and we don't need to revisit your contract each of the first two or three years."

Musselman's contract includes a no-compete clause that prohibits him from taking any other coaching job within the SEC for the duration of his contract, including any extensions. The clause is waived if Musselman is fired by the university.

If Musselman is fired by Arkansas for convenience, he will be owed 70% of the total compensation remaining on his contract, including seasons earned as extensions.

"That's become standard throughout the contracts we're doing now," Yurachek said. "We're trying to standardize that across the board for what all of our coaches' contracts look."

Arkansas will not owe Musselman any compensation if he is fired for cause, which would include reasons such as repeated NCAA rules violations; use or possession of illegal substances; providing false or misleading information to the UA; or failing to promptly report any violations related to the UA's Title IX policy.

Musselman will get 10 complimentary tickets to each home basketball game and five tickets to all other Razorbacks sporting events. He also gets two vehicles and free membership to a local country club and fitness center with $25,000 in moving expenses.

Musselman's contract also includes bonuses that can rise to $300,000 annually if the Razorbacks win SEC regular-season or tournament championships, Musselman is named SEC or national coach of the year, and his team has a graduation rate of 80% or higher.

Yurachek hired Musselman on April 7, so it was more than five months before his contract was finalized.

"Last week when I took the final contract to Eric, he was having a staff meeting, and I kind of tossed it in the center of the table that they were sitting around and I said, 'Are any of you concerned that the head coach who hired you hasn't signed his contract yet?' " Yurachek said with a laugh. "It was kind of a moment of levity.

"The offer letter really kind of binds him to Arkansas, but to have the contract signed, sealed and delivered is nice. I think our fans will see here in about 60 days when the season starts that he's doing a great job as our basketball coach."

"I'm hoping this is where he and I both end our careers, and we have a lot of success and have an enjoyable partnership," Yurachek said. "We're in this together for the long haul."