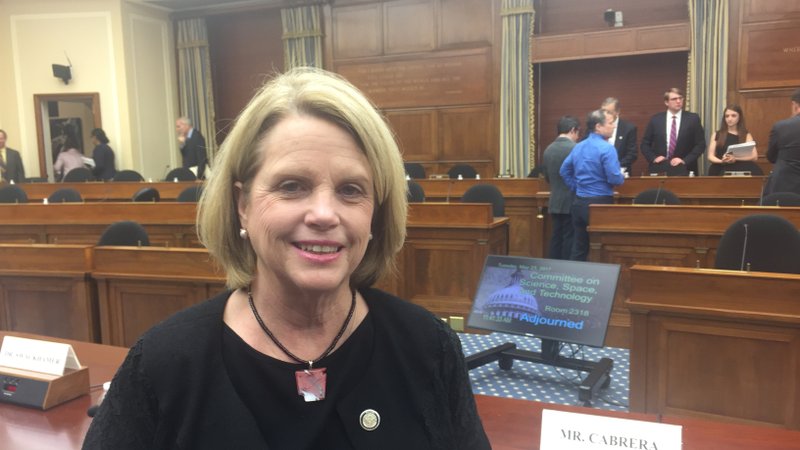 Becky Keogh, secretary of the Arkansas Department of Energy and Environment and previously director of the Environmental Quality Department, is shown in Capitol Hill in this file photo.

Federal officials have discarded their plan for reducing Arkansas' air pollutants that impede visibility at national wilderness areas, three years after finalizing the plan over the protests of utility companies.

The U.S. Environmental Protection Agency has approved an Arkansas Department of Energy and Environment plan to replace its own. However, a proposed move by a major Arkansas utility to shut down its Arkansas coal-fired plants may render moot the state plan's attempt to mitigate the costliest parts of the EPA's plan.

Phase II of the 2016 EPA plan called for emissions controls that utilities contended would collectively cost them billions of dollars, though the EPA estimated an amount far less.

The emissions in question have been linked to respiratory illnesses, hospitalizations and deaths, but the federal regulation that targeted them concerns only visibility at 156 national parks and wilderness areas. The Regional Haze Rule effectively targets electricity-generating plants, which are major producers of the sulfur dioxide, nitrogen oxide and particulate matter that contribute to haze.

The Regional Haze Rule, approved in 1999, implements part of the Clean Air Act passed by Congress. States must submit plans every 10 years to improve visibility to mandated levels by 2064. The first plans were due more than 10 years ago, with the first haze reduction goals to be met last year, and the second plans were due last year. The announcement Tuesday refers to the first plan, which has yet to be fully implemented in Arkansas.

Arkansas must plan to improve four wilderness areas: the Upper Buffalo River and Caney Creek in Arkansas and the Hercules Glades and Mingo in Missouri -- about 10 and 35 miles north of Arkansas, respectively.

Electric utilities and the Arkansas Department of Environmental Quality, now called the Arkansas Department of Energy and Environment, contended that the EPA's plan called for emissions reductions that were too restrictive. The utilities argued that the costs were unworkable. The agency argued the pace of visibility improvements in those areas rendered the extent of the EPA's plan unnecessary for rule compliance.

Becky Keogh, now secretary of the state Department of Energy and Environment and previously director of the Environmental Quality Department, welcomed the EPA's announcement Tuesday that it had approved Arkansas' Phase II plan.

"Arkansas is well positioned with this approved plan to achieve and surpass the air-quality goals set in federal law, while realizing over $2 billion of savings to ratepayers," Keogh said in a news release issued by the EPA.

The Arkansas Department of Energy and Environment did not issue any statements.

The Sierra Club and the National Parks Conservation Association issued a statement Tuesday contending that the EPA plan "would have resulted in much more effective air pollution protections for certain national parks and wilderness areas in Arkansas and Missouri" and improved public health.

"We are disappointed that the [President Donald] Trump EPA has embraced a plan that will result in dirtier air for Arkansas," Arkansas Sierra Club spokesman Glen Hooks said in a statement.

Phase II was the most contentious portion of the plan and was stayed in federal court along with Phase I, for which the EPA has already approved a replacement state plan.

Phase I concerned nitrogen oxide emissions, but utilities largely complied with the EPA's plan during the legal uncertainty about what they'd be required to do. Utilities spent several million dollars installing low-nitrogen oxide burners.

At Entergy Arkansas' White Bluff and Independence coal-fired plants, that would have required what the utility estimated to be about $500 million scrubbers for the two units at each plant -- a total of about $2 billion.

The utility, plant co-owners, state officials and a ratepayer group protested both the requirements and the inclusion of the slightly newer Independence plant.

The EPA issued a plan for Arkansas after partially rejecting the state's plan in 2012. Facing a federal court deadline, the EPA issued its own plan in early 2015 because the state had not submitted a revised one. Keogh announced she would pursue one, and the EPA stated at the time that its preference has always been for an approvable state plan.

The state plan requires coal-fired plants to use lower sulfur coal than what they have been using.

But in late 2018, Entergy Arkansas announced it intended, as part of a legal settlement with the Sierra Club and the National Parks Conservation Association, to close the Independence and White Bluff plants in Independence and Jefferson counties by 2030 -- about the EPA's suggested deadline. Each plant is about 1,700 megawatts, more than double the size of the state's next-biggest coal-fired plant.

The utility said it would be more economically feasible in the long run to continue its trend of investing in natural gas and solar power.

Each plant employs about 100 people and is a major contributor to local school districts through utility taxes.

A judge has not finalized the settlement, and Arkansas Attorney General Leslie Rutledge has requested an Arkansas Public Service Commission review of the plan.

The state has argued in court filings that since those goals were determined, Caney Creek and the Upper Buffalo River were measured for haze at 20.41 deciviews and 19.96 deciviews, respectively.

It's unclear what the current levels are for those sites or for the two in Missouri.

A switch to the fuel required by the state plan would cost Entergy Arkansas about $1,150 per ton of sulfur dioxide reduced, according to the company's estimates.

During those years, the utility has reported, the plants were used less frequently because of drops in natural gas prices.

The department estimated that the switch would improve visibility by 0.129 deciviews at Caney Creek and 0.143 deciviews at the Upper Buffalo.

With estimated costs of $14.5 million and $11.9 million per deciview of improvement at Caney Creek and the Upper Buffalo, respectively, the improvements would cost Entergy Arkansas just less than $1.9 million and about $1.7 million for each site.

The Flint Creek coal-fired plant in Gentry has already installed controls -- which also addressed mercury emissions -- in a $408 million project.