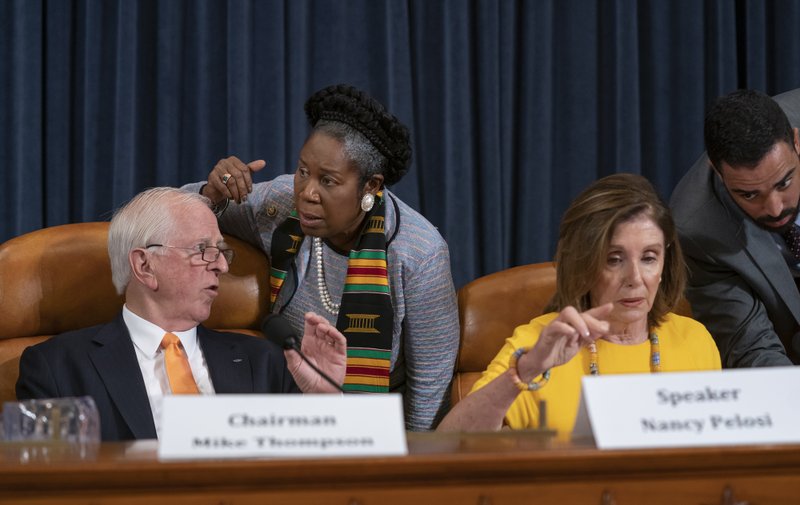 "Lives are at stake," Pelosi told reporters in response to questions about whether the House could have done more to curb gun violence after a series of mass shootings.

"Don't ask me what we haven't done. We have done it," Pelosi said. "If you are annoyed with my impatience, it's because people are dying because Sen. McConnell hasn't acted. Why don't you go ask him if he has any regrets for all the people who died because he hasn't acted?"

McConnell has refused to allow a vote on a House-passed bill to expand background checks for gun purchases, saying it's not clear the Senate would be able to pass the legislation or that President Donald Trump would sign it into law.

For Democratic leaders, who held a news conference Monday to push for action on guns, "It's all about trying to scare people," McConnell said.

Rep. Steve Scalise of Louisiana, the No. 2 House Republican, took a similar line after a meeting of GOP leaders Tuesday at the White House. Trump wants to work with Congress "to solve problems," Scalise said, while Democrats appear intent on being "more aggressive in taking away people's guns."

Scalise said the House-passed bill "just makes it harder for law-abiding citizens to exercise their Second Amendment rights, and we're not going there."

Still, the White House meeting reflected increasing pressure for Congress to act after the spate of mass shootings that killed dozens of people.

McConnell said the summer's mass shootings "deserve a response," but he's waiting on the White House to decide the next steps. The White House had previously warned it would veto the House's background-checks bill.

White House spokesman Judd Deere said the meeting with GOP congressional leaders lasted well over an hour and covered a variety of issues, not just guns. He declined to say whether or when Trump will release a plan.

Separately, the White House's legislative director held a private meeting with Republican senators earlier Tuesday to discuss ideas the administration is considering, including so-called red-flag legislation that would allow officials to take away guns from people believed to be dangers to themselves or others. Proposals also include quicker imposition of the death penalty for mass shooters.

Some GOP senators said inaction is not an option, and they are anxious for Trump to take the lead.

Sen. Pat Toomey, R-Pa., who has championed another bill that would expand background checks, told reporters, "It's time to act now."

Toomey has had several discussions with the president in recent weeks, but he said he still is "not sure" if Trump is rethinking his past opposition to the bill.

Republican Sen. Johnny Isakson of Georgia emerged from Tuesday's lunch saying, "Many of us feel like doing nothing is not a satisfactory answer."

McConnell also met Tuesday with a bipartisan group of U.S. mayors, including some from cities where mass shootings occurred. The mayors are urging approval of the House bill.

The bill, passed by the House in February, would expand background checks to cover private sales such as one that allowed a Texas gunman to purchase his weapon before killing seven people last month.

The U.S. Conference of Mayors is focusing on background checks as a first step to stem gun violence. A letter signed by 278 mayors from both parties urged passage of the House bill.

The Senate Democratic leader, Charles Schumer of New York, said McConnell should quit with the words and "put the bill on the floor" for a vote.

"Shame on him," Schumer said. "There are people who died. Shame on him."

Information for this article was contributed by Padmananda Rama and Mary Clare Jalonick of The Associated Press.