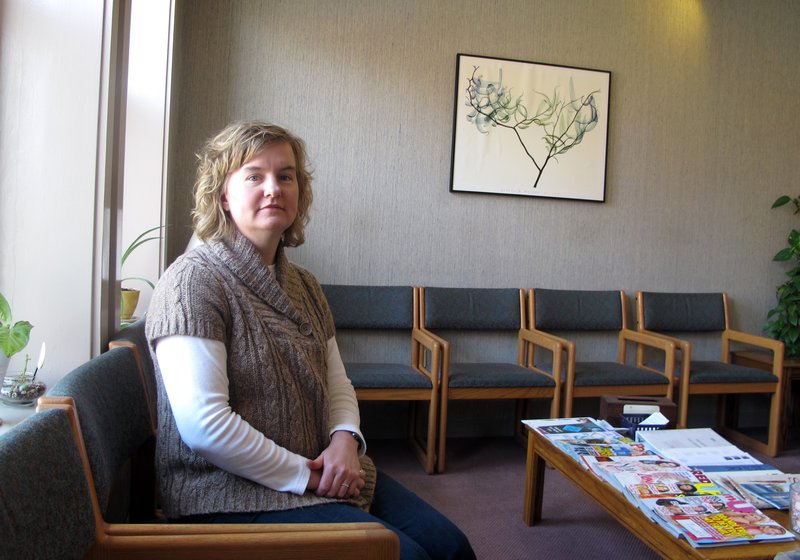 In this Feb. 20, 2013, file photo, Tammi Kromenaker, director of the Red River Valley Women's Clinic, North Dakota's sole abortion provider, sits in the waiting area of the facility in Fargo, N.D. A federal judge in North Dakota on Tuesday, Sept. 10, 2019, has blocked a state law passed earlier this year that required physicians to tell women they may reverse a so-called medication abortion if they have second thoughts. Kromenaker, said the law would force doctors to give false information that is not backed up by science. (AP Photo/Dave Kolpack, File)

FARGO, N.D. -- A federal judge in North Dakota on Tuesday blocked a state law enacted earlier this year that required physicians to tell women they may reverse so-called medication abortions if they have second thoughts.

North Dakota is among eight states to pass or amend laws requiring doctors to tell women undergoing medication abortions that they can still have live births after the procedures. The other states with similar laws are Arkansas, Idaho, Kentucky, South Dakota, Oklahoma, Nebraska and Utah. Five of those laws were passed this year.

The North Dakota law also would require a doctor to tell the patient that "time is of the essence" if she changes her mind.

Tammi Kromenaker, director of North Dakota's sole abortion clinic, which filed a lawsuit in June, said in a statement that the law would force doctors to give false information that is not backed up by science.

"It's simple," Kromenaker said. "Patients need to be able to trust their providers."

U.S. District Judge Daniel Hovland said in his order that state lawmakers should not be mandating unproven medical treatments and that the provisions of the bill "go far beyond" any informed consent laws addressed by the U.S. Supreme Court, Eighth U.S. Circuit Court of Appeals "or other courts to date."

Hovland was nominated by President George W. Bush in 2002 and confirmed by the U.S. Senate that same year. He is scheduled to take senior status this year.

Supporters of the law say the hormone progesterone may stop an abortion after a woman has taken the first of two medications needed to complete the procedure. Republican state Rep. Daniel Johnston, who sponsored the bill, has said the measure does not restrict abortions and that he couldn't see "how anyone could be against it."

Mike Nowatzki, spokesman for North Dakota Gov. Doug Burgum, referred to the GOP governor's comments when he signed the bill in March. Burgum noted at the time that it was approved overwhelmingly in both chambers of the Legislature and said, "If it gives hope to even one person who has started the process and wants to try to reverse it, it is worth providing that information."

Marc Hearron, attorney for the Center for Reproductive Rights, said in a news release that the issue came down to free speech and protecting the First Amendment rights of physicians.

"Across the country, doctors are being used as political pawns in the attack on abortion," Hearron said. "We all have the right to free speech and to speak the truth. That doesn't change because you're a doctor who provides abortion care."

The complaint from the Center for Reproductive Rights on behalf of the Red River Women's Clinic in Fargo and the American Medical Association also targets a law requiring doctors to tell patients that abortion terminates "the life of a whole, separate, unique, living human being." The court has yet to rule on that provision, which abortion-rights advocates argue is an ideological, nonmedical message.

Dr. Patrice Harris, president of the American Medical Association, lauded Hovland's decision and said her group became involved because it doesn't believe government should dictate what physicians say to their patients.

"We look forward to seeing the case through and continuing to defend the right for patients to speak freely with their physicians about all their health care options," Harris said in a statement.