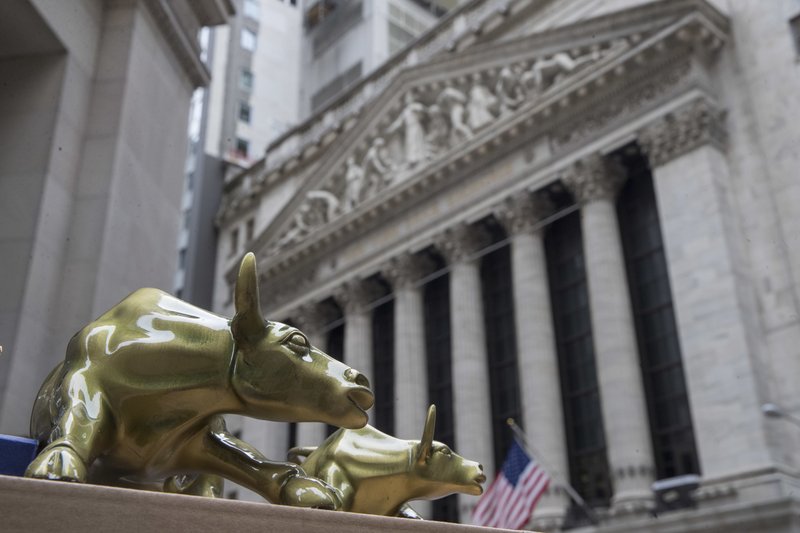 In this April 24, 2018, file photo replicas of Arturo Di Modica's "Charging Bull" are for sale on a street vendor's table outside the New York Stock Exchange. (AP Photo/Mary Altaffer, File)

For the second day in a row, traders unloaded technology stocks and shares in companies that rely on consumer spending. Microsoft dropped 1.1%, as did payment processors Visa and MasterCard, losing 2.9% and 3.9%, respectively.

"It seems like a complete reversal of what's kind of been the theme over the last few months, where it's been more about higher quality, higher market cap, higher growth, more stable growth and lower volatility," said Sameer Samana, senior global market strategist at Wells Fargo Investment Institute. "Things that had been doing well just completely got sold and the things that had been lagging completely got bought.

Investors continued to flock to smaller-company stocks. They're seen as being better shielded from the fallout of the costly trade war between the U.S. and China than large multinationals.

Among the small-cap gainers were ABM Industries, which rose 3.1% and Spectrum Pharmaceuticals, which jumped 16.9%.

The broader market has been gaining ground for two weeks as investors remain confident in the strength of the economy, despite the lingering trade war between the U.S. and China. The feud between the world's two largest economies has been injecting doses of volatility into the market as both sides escalate and then pull back. Recent plans for trade talks to resume in October raised some hope on Wall Street for a resolution.

Meanwhile, investors continue to watch the steady flow of economic data for a clearer picture of the U.S. economy's health. Recent reports have been a mixed bag, including a Labor Department report Tuesday that showed both a slip in job openings as well as a slight increase in hiring in July.

Apple rose 1.2% after announcing a new slate of iPhones and other products, including a $5 a month streaming video service, which would be cheaper than rival offerings. Netflix and Disney each fell 2.2%.

Traders knocked Wendy's shares 10.2% lower after the fast-food chain cut its profit growth forecast because of plans to expand its breakfast options nationwide. The company plans to invest $20 million this year in the expansion and expects up to 6.5% profit growth instead of 7% growth.