Election follows annulment of ’18 vote by Compiled by Democrat-Gazette staff from wire reports | September 11, 2019 at 4:03 a.m. 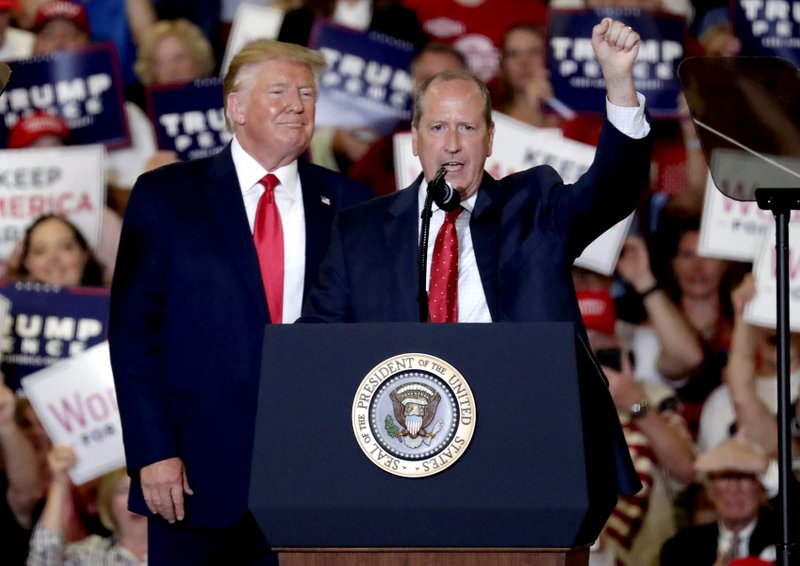 RALEIGH, N.C. -- Republican Dan Bishop claimed a narrow victory Tuesday in a special election for an open House seat in North Carolina, preventing the Democratic capture of a district the GOP has held for nearly six decades.

Late Tuesday, Bishop appeared at W.F. Harris Lighting in Monroe to a standing ovation and fireworks, and he was embraced by his wife and son. He thanked his family, campaign staff and supporters.

[Video not showing up above? Click here to watch » https://www.youtube.com/watch?v=LgiuDe5IZSg]

Bishop, 55, is a state senator best known for sponsoring a North Carolina law dictating which public bathrooms transgender people can use. The law was repealed after it prompted a national outcry.

Bishop tied himself tightly to President Donald Trump, who appeared at an election-eve rally in Bishop's district. The president quickly took credit for the triumph.

"Dan Bishop was down 17 points 3 weeks ago. He then asked me for help, we changed his strategy together, and he ran a great race. Big Rally last night," Trump tweeted Tuesday night. No polling has emerged publicly that showed Bishop with a deficit that large. Operatives from both parties and analysts had long said the race was too close to call.

In his Tuesday night remarks, Bishop lauded Trump and thanked him for his help.

"Look how he laid himself on the line for this race," Bishop said.

The results in the district underscored the rural-urban split between the parties, with Bishop running up substantial numbers in outlying areas and McCready eroding GOP advantages in suburban areas. McCready's moderate profile resembled that of many Democrats who won in Republican-leaning districts in the 2018 midterms.

Bishop's margin was far less than the 11 percentage points by which Trump captured the district in 2016. It was slightly greater than the advantage for then-GOP candidate Mark Harris when he seemed to win the seat over McCready last year -- before those results were annulled after evidence of vote tampering surfaced.

Republicans have held the seat since 1963, and its loss would have been seen as a worrisome preface to the party's presidential and congressional campaigns next year.

"I think it means Trump is going to get a second term and Republicans will retake the majority," House Minority Leader Kevin McCarthy, R-Calif., said of the results.

"Bishop, his policies, follow my convictions -- after hearing Bishop, knowing that he's for the Second Amendment and he's against illegal immigration," said Susie Sisk, 73, a retiree from Mint Hill. The registered Democrat said she voted for Bishop.

McCready, a former Marine turned financier of solar energy projects, was banking on the district's suburban moderates to carry him over the top.

Along with a GOP victory in a second vacant House district in North Carolina, Republicans pared the Democratic majority in the House to 235-199, plus one independent.

That seat has been vacant since February, when 13-term GOP Rep. Walter Jones died.

Information for this article was contributed by Alan Fram and Emery P. Dalesio of The Associated Press; and Jim Morrill, Teo Armus and Lauren Lindstrom of the Charlotte Observer.