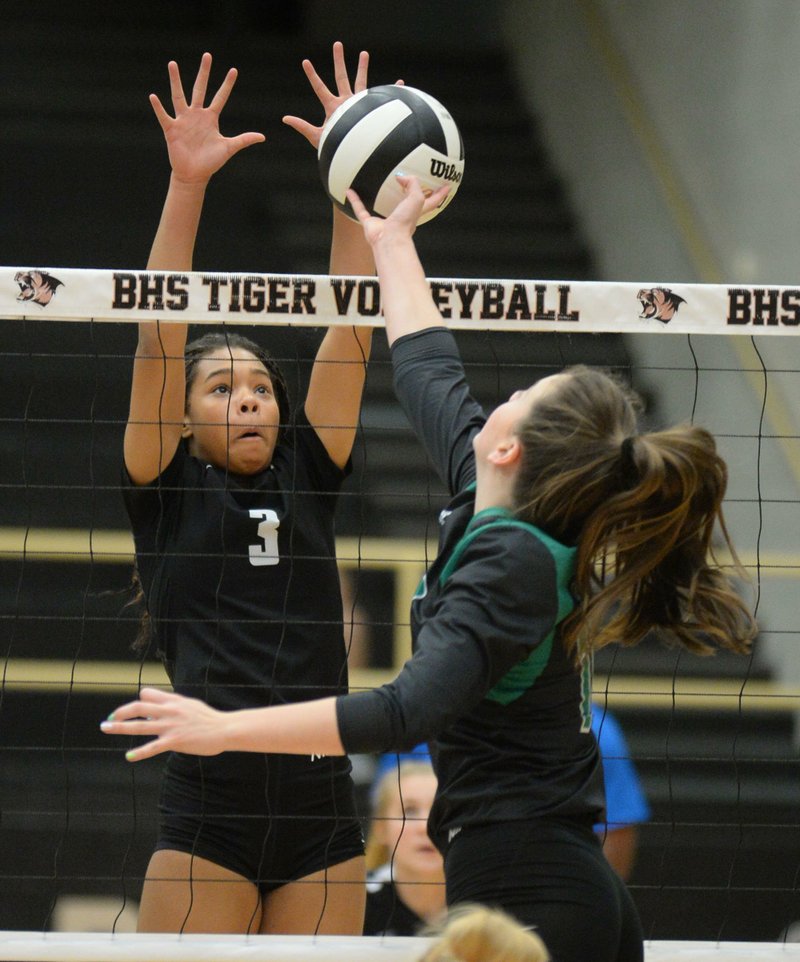 BENTONVILLE -- Senior Savanna Riney torched Van Buren for 18 kills with only two errors to lead Bentonville High to a 25-17, 25-16, 25-18 win over the Lady Pointers in 6A-West Conference volleyball on Tuesday night at Tiger Arena.

The Lady Tigers improved to 6-3 overall and 1-1 in the 6A-West, and dominated play most of the evening despite trailing early in each of the final two sets.

Riney had three kills in a 7-0 spurt in the second set that turned an 8-6 deficit into a 13-8 advantage and the Lady Tigers cruised to the 2-0 advantage. A 6-0 run in the third set gave Bentonville a 12-7 advantage en route to the sweep.

Bentonville coach Michelle Smith praised Riney for her front-row play, but she was also pleased with her team's defense, which registered 59 digs in the three-set match. Libero Kloey Eakin finished with nearly half the team total with 27 on her own.

"The girls kept their composure, I was really proud of them," Smith said. "Defensively, you saw it in that last rally. It was unreal. I was so proud of them. Because Van Buren has some big hitters at the net and they just couldn't get into a rhythm with our defense doing the job they did tonight."

Trinty Hamilton registered a double-double with 10 kills and 10 digs for the Lady Tigers, while Callie Neumann added 8 kills. Taylor Shapley dished out a match-high 31 assists to go with 7 digs. Riney also chipped in 6 digs and 2 aces.

The Lady Tigers enjoyed a nice night offensively as well, hitting a sizzling .341 as a team. Riney hit .552 on the night, while Neumann finished with a blazing .727 hitting percentage with no errors on her 8 kills.

Freshman Kennedy Pheland dished out 23 assists, while Rosana Hicks had a team-high 8 kills for Fayetteville (10-1, 2-0).

The Lady Mounties were led by Gracie Carr with 6 kills, while Ryley Martin added 5 kills and Brooke Park chipped in 8 digs.

Skylar Fernandez had 5 kills, 16 assists and team-highs of 4 aces and 10 digs for Har-Ber (7-3, 2-0 6A-West). Mackenzie White chipped in eight kills, while Caylan Koons dished out a team-best 25 assists.