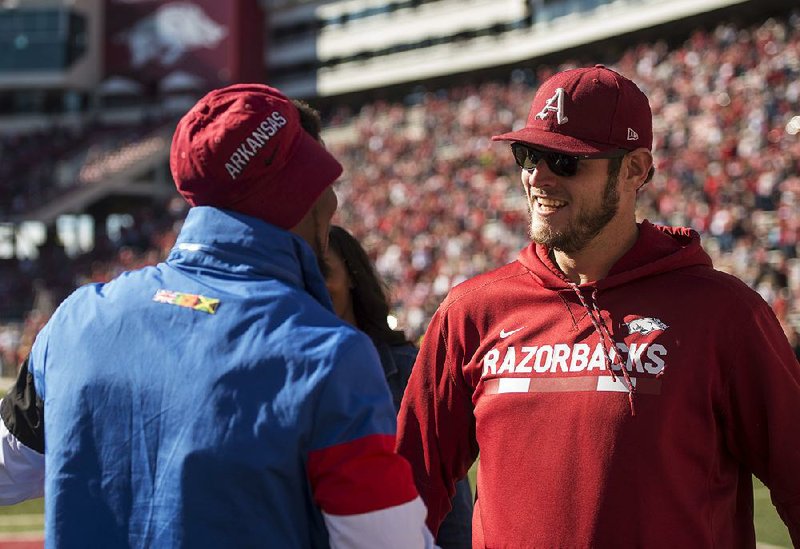 Former University of Arkansas quarterback Ryan Mallett was arrested Tuesday evening in Springdale on suspicion of driving while intoxicated, according to Lt. Jeff Taylor of the Springdale Police Department.

The call came in on a two-vehicle accident near the intersection of New Hope Road and Arkansas 112 near Arvest Ballpark at 6:23 p.m., and Mallett was arrested at 6:56 p.m., Taylor told the Arkansas Democrat-Gazette.

Mallett, 31, was taken to the Springdale jail and his bond was set at $800, Taylor said.

Mallett led the Razorbacks to an 18-8 record in his two seasons as a starter in 2009-10. A third-round draft choice with the No. 74 pick of the 2011 NFL Draft by the New England Patriots, Mallett played three seasons as the backup to Tom Brady with the Patriots.

He also played two years for the Houston Texans and three seasons with the Baltimore Ravens, ending in 2017.

Mallett had been a visitor at numerous Razorback football practices in recent months.

It was the season-opening tournament for the Red Wolves.

Oral Roberts won the meet with a 21-over 873. Host Missouri State and Texas-El Paso tied for second with an 884.

Tania Nunez paced the University of Central Arkansas with a three-round total of 226 as the Bears placed 11th in the Southern Methodist University Trinity Forest Invitational in Dallas.

Rogers State won the event by two strokes (609). Aitana Hernandez of Northeastern State was the medalist in the two-day event with a 3-over 147.

Lee finished at 7-over 151, as did Harding University's Julie Fierro. Henderson's Allie Bianchi was seventh with a 9-over 153. Harding's Kierra Smith placed ninth with a 10-over 154.

Kenzie Collins turned in a final-round 86 to earn seventh-place honors at the Lyon College Fall Classic played at the Cooper Hawk's Golf Course in Melbourne.

Timmerman 10 under at GAC Preview

Southern Arkansas junior Roman Timmerman finished the GAC Preview Tournament in Oklahoma City with a three-day total of 206 to tie for medalist honors.

Timmerman and Dakota Clark of Oklahoma Baptist were both 10 under at the Lake Hefner Golf Course. Timmerman won the tournament in a scorecard playoff.

Southern Arkansas won the tournament with a 22-under 842, 10 strokes in front of Southern Nazarene and 12 strokes ahead of Harding.

Andrew Pearson of the University of Arkansas at Monticello tied for third in the tournament with a 6-under 210. Harding's Ryan Camras and SAU's Logan Stephens tied for sixth with a 5-under 211.

Led by a 4-under 209 from Blaine Calhoon, Central Arkansas finished in a tie for sixth at the Sam Hall Intercollegiate Tournament at the Hattiesburg (Miss.) Country Club.

Calhoon was 12th overall, 14 strokes behind medalist Noah Steele (18 under, 195) of Sam Houston State. Brad Daughdrill of UCA shot a 3-over 216 and finished tied for 26th.

Sam Houston State won the three-round tournament with a 33-under 819, 10 strokes ahead of runner-up Southern Mississippi. UCA shot a 6-over 868 and tied for sixth with Missouri State.

Tristan Majaraj's 219 set the pace for the University of Arkansas at Pine Bluff in the Murray State Invitational at the Miller Memorial Golf Course in Murray, Ky.

The Lions finished seventh in the 17-team field.

UAPB finished with a three-round total of 879. Murray State won the event.

Clark was four strokes better than Scott Schmidt of Lyon for the medalist honors. Body Jackson of CBC was third at 4-over 148.

Nick Beausoleil fired a 1-over 73 at to help Lyon finish second in the team standings. Tomas Mariscotti and Clayton Harbour each shot a 2-over 74 on Tuesday and finished sixth and seventh, respectively.

Hyde produced a personal-best time in the 4K distance with a time of 14:32.1. Henderson placed second in the UCA XC Challenge with a career-best time of 19:08.5 on the 6K course.

Limited to even shots, Williams Baptist dropped a 5-0 decision to Evangel on Tuesday afternoon in Walnut Ridge.

Getting goals from Rafael Santos and Marcos Fernandez, the Lyon Scots defeated Southwestern Christian 2-1 in Batesville on Tuesday afternoon.

Freshman Nicolo Ferraro scored a goal and assisted on another in the first five minutes of the second half as Williams Baptist defeated Evangel 5-3 in Walnut Ridge on Tuesday afternoon.

Trailing 1-0 at the half, Williams Baptist picked up two goals from Gonzalo Gallego and one each from Ferraro, Kaique Aleixo and Ramon Matsuy.

Bowes led a stout defensive effort in the Bisons' 3-1 victory against William Jewell.