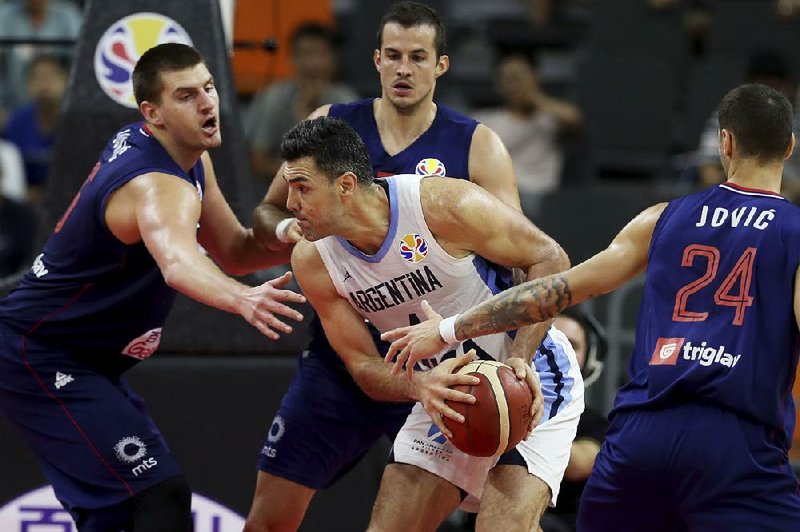 DONGGUAN, China -- The last time Luis Scola went to the semifinals of the World Cup, he was 26 and waiting to bring his long, flowing dark hair to the NBA for the first time.

He's 39 now. A decade-long career in the NBA has come and gone. The hair is closely cropped now, with plenty of gray mixed in there.

And he's back in FIBA's Final Four.

Scola scored 20 points, Facundo Campazzo finished with 18 points and 12 assists and Argentina stunned Serbia 97-87 in the World Cup quarterfinals on Tuesday night. Argentina (6-0) plays next in Friday's semifinals at Beijing against the winner of today's quarterfinal in Dongguan between the U.S. (5-0) and France (4-1).

Serbia was considered the pre-tournament favorite by many, and came in expecting to win gold after losing title games to the U.S. at the 2014 World Cup and 2016 Olympics. Argentina had other plans and Scola made a very loud statement after the game -- this outcome, he insisted, was no fluke.

Bogdan Bogdanovic scored 21 points for Serbia (4-2), which got 18 points from Nemanja Bjelica and a 16-point, 10-rebound effort from All-NBA center Nikola Jokic. Vasilije Micic played 18 minutes for Serbia after the death of his mother earlier this week.

"We put a lot of work in this summer," Bjelica said. "It's hard. But it's basketball. There are more important things."

Argentina led most of the way, lost the lead briefly on the first possession of the fourth quarter when Marko Guduric made a three-pointer for Serbia -- which the winners answered with a 19-6 run over the next 6 minutes.

Bogdanovic's three-pointer with 1:20 left got Serbia within 91-85. But Campazzo's jumper on the next possession pushed the lead back to eight, and that's about when the blue-and-white-clad Argentine fans in the stands knew it was time to celebrate.

Scola said it was a total team effort.

"I think we played a very good basketball game," Scola said. "We're a good team. We've played a great tournament and we deserved to win."

SHANGHAI -- Ricky Rubio scored 19 points, including a pair of three-pointers in a game-deciding 11-0 run in the final minutes, and Spain advanced to the semifinals by topping Poland.

Willy Hernangómez scored 18 points, Rudy Fernandez added 16 and Rubio had a game-high nine assists for Spain (6-0), which had been beaten in the quarterfinal round of the past two World Cups -- by France in 2014, and by Serbia in 2010 when the tournament was still called the world championship.

But Spain broke through this time, and will face either Australia or the Czech Republic in the semifinals at Beijing on Friday.

A.J. Slaughter scored 19 points and Adam Waczynski finished with 15 for Poland (4-2), which is assured of finishing no worse than eighth at its first appearance at the World Cup since 1967.

Poland got within 76-72 on a layup by Waczynski with 5:42 remaining, but Spain pulled away over the next three minutes. Hernangómez's three-point play got Spain's run started, Rubio then made his three-pointers about 90 seconds apart and Marc Gasol found Victor Claver for a dunk with 2:41 left that made it 87-72.