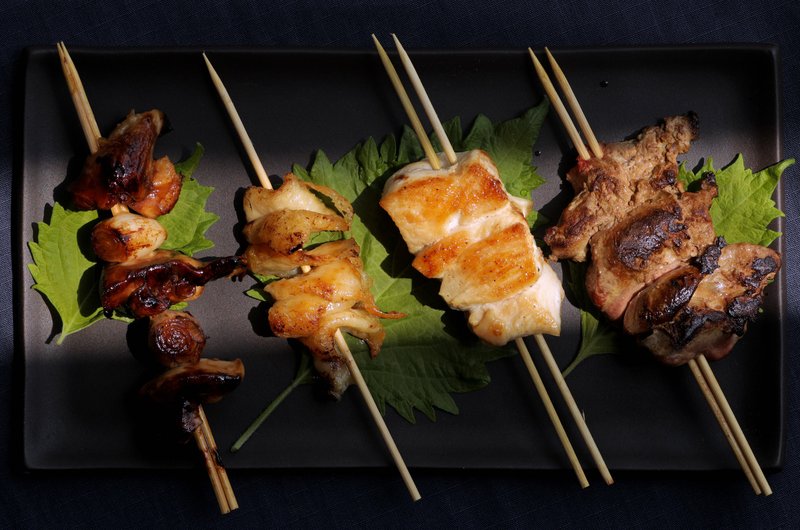 Yakitori (or chicken on a skewer) versions, left to right, tare style, torikawa, with shio (or salt) and reba (or livers). (Christian Gooden/St. Louis Post-Dispatch/TNS)

Just west of Tokyo's Shinjuku station, the busiest train station in the world, the air is said to be heavy with the irresistible aroma of chicken cooking on charcoal grills.

This is Yakitori Alley (though it also has a less appealing name), perhaps the greatest concentration of yakitori street food stalls in all of Japan. If you don't happen to be there, don't worry: Yakitori is popular throughout the country.

And if you aren't in Japan, that's also no problem. You can easily make it yourself at home. It only takes a few minutes to make one of Japan's most irresistible street treats.

In its most basic form, yakitori is small pieces of chicken that are skewered and cooked quickly over blazing hot charcoal. It is often eaten as a snack, particularly on the way home from work — which is why you can usually find it near a train station.

It is also popular later in the evening, to enjoy after (or during) a few drinks. It goes especially well with beer.

Not surprisingly, you can get yakitori made from virtually any part of a chicken: skin, heart, liver, even the cockscomb and cartilage from the keel bone between the breasts. But this is America, so I have decided to concentrate only on yakitori from the thigh and the breast. And maybe the skin. And the liver.

No matter what part of the chicken it comes from, yakitori typically is prepared in one of two ways. Shio is just flavored with salt, though after it is cooked, you can add a squeeze of lemon, a spice mix or a hot sauce. Tare is basted with a thickened, sweet soy, mirin and sake sauce.

Shio is typically made with pieces of breast meat. I stuck a few bite-size pieces on a skewer and cooked them relatively quickly on a hot, oiled skillet.

A word about the skillet: Yakitori is meant to be grilled, but I don't have a grill in the test kitchen in the office — because it is in the office, and lit charcoal would suffocate everyone in the building. So I did the next best thing, which is to cook it on a skillet. It didn't have the charcoal flavor, but it was wonderful nonetheless.

Now, a word about the skewer: I actually used two skewers for every piece of yakitori. In Japan, they use special wide, flat skewers, which make it easy to turn the meat. But all I could get here were thin, round skewers. Two of these skewers let you turn the meat with ease.

As I said, the yakitori with shio was wonderful. I used plenty of salt before cooking, bringing the meat just to the point before it is too salty. After it was cooked, I spritzed it with lemon juice and topped it with togarashi, a spicy, seven-ingredient Japanese spice blend.

Yakitori with tare are usually made with small pieces of chicken thigh meat alternated with a form of onion. In Japan, they use long onion, which is sort of a cross between green onions and a leek. But I couldn't find long onion, so I just used pieces of green onion.

The versatile tare — sauce — could not be simpler to make. It's just two parts soy sauce to one part each of granulated sugar, sake and mirin, boiled together until it is lightly thickened.

I repeatedly basted some of the skewers of yakitori with the sauce while they were cooking, and marinated others in the sauce for 30 minutes before putting them in the pan. There was very little difference in taste between them, so just do whichever you find easier.

And yes, I have a word about the tare, too: It tastes amazing, and is the perfect accompaniment to both the chicken and the green onions. There should be no problems if you grill with it, but using it in a skillet results in a blackened mess that ferociously sticks to your pan. Still, it isn't too hard to clean: Just soak the pan in soapy water for a few hours and the black mess will lift right up.

Because I'm not squeamish, I also made torikawa and reba — that is, yakitori made with strips of chicken skin and chicken livers. Both are prepared shio style, with just salt.

The torikawa, the chicken skin, was as good as I thought it would be. When chicken skin receives enough heat it becomes crispy, with a rich, irresistible flavor. All it needs to be the perfect (though perhaps unhealthful) snack is plenty of salt, which you give it before cooking.

The reba, the chicken livers, were also as good as I'd hoped. Skewering them and cooking them in a skillet or over a fire does not significantly alter their flavor. They tasted exactly like chicken liver.

If grilling, soak bamboo skewers in water at least 30 minutes and prepare grill for direct heating. Lightly oil a large skillet if using the stove.

Dice chicken into bite-sized pieces of equal size. Thread 3 to 4 pieces onto 2 skewers side by side. Sprinkle the chicken on each skewer with a good pinch or two of salt.

Place skewers on grill directly over heat and cook, turning at least once, until thoroughly cooked.

Alternatively, cook several skewers at once in a skillet over medium-high heat, turning at least once, until thoroughly done. Remove from heat and serve with slices of lemon, togarashi and yuzukosho if desired.

Note: Look for togarashi and (sometimes) yuzukosho in the spice aisle of some well-stocked grocery stores or at international markets.

Recipe by Ochikeron via YouTub 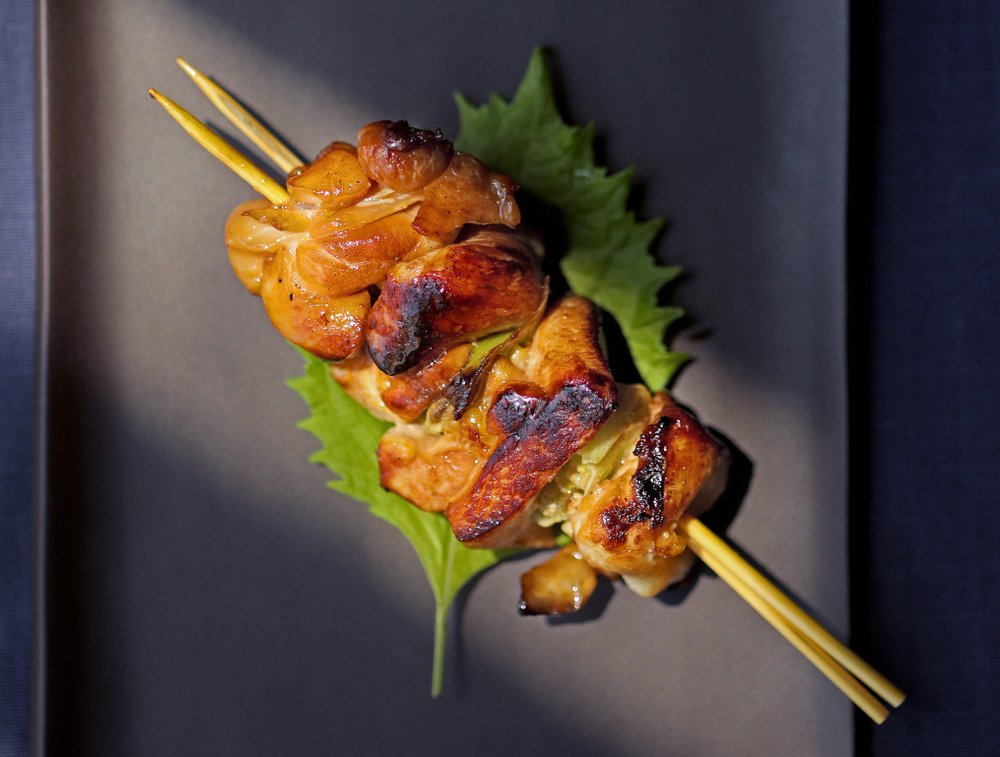 Yakitori (or chicken on a skewer) tare style. Tare is skewered with green onions and is basted with a sauce. (Christian Gooden/St. Louis Post-Dispatch/TNS)

Mix soy sauce, sugar, sake and mirin in a small pot and boil for 8 to 10 minutes until the sauce becomes slightly thickened. Set aside. Slice the thick part of the onions into 1-inch pieces and set aside

Dice chicken into bite-sized pieces of equal size. Thread chicken, alternating with onion onto 2 skewers side by side, until you have 2 pieces of onion and 3 pieces of chicken on each skewer.

Place skewers on grill directly over heat or in prepared skillet in batches over medium-high heat. Baste with the sauce a few times while you cook, turning at least once, until thoroughly done. Remove from heat and serve. 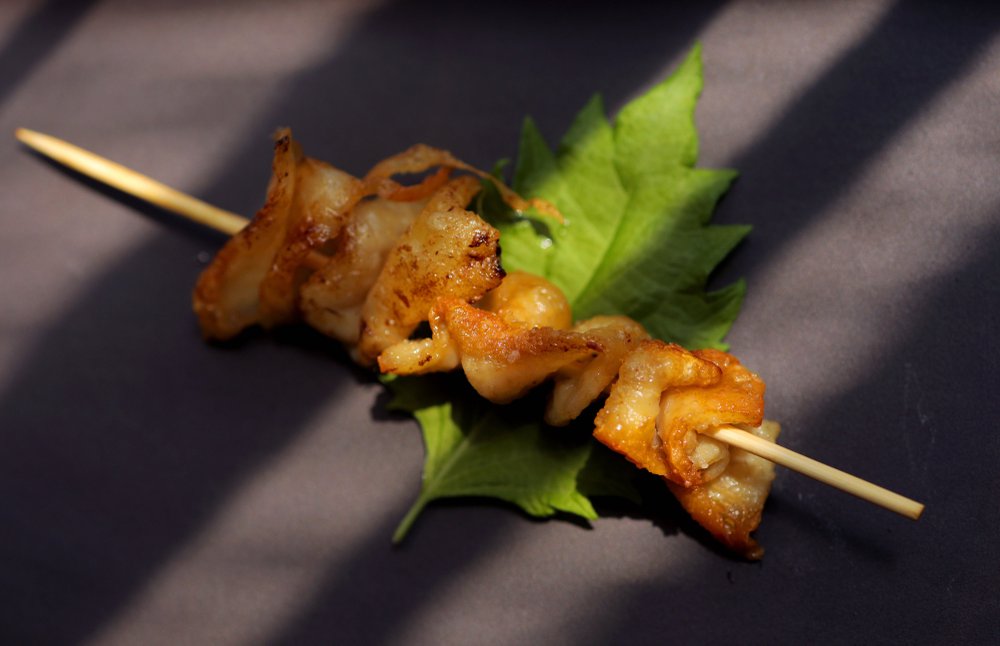 Slice skin into thin strips. Thread strips of skin from 1 thigh or 1/2 breast onto 2 skewers side by side and sprinkle generously with salt. Place skewers on grill directly over heat or on a large skillet over medium-high heat. Turn a few times until thoroughly cooked and mostly crispy. Remove from heat and serve. 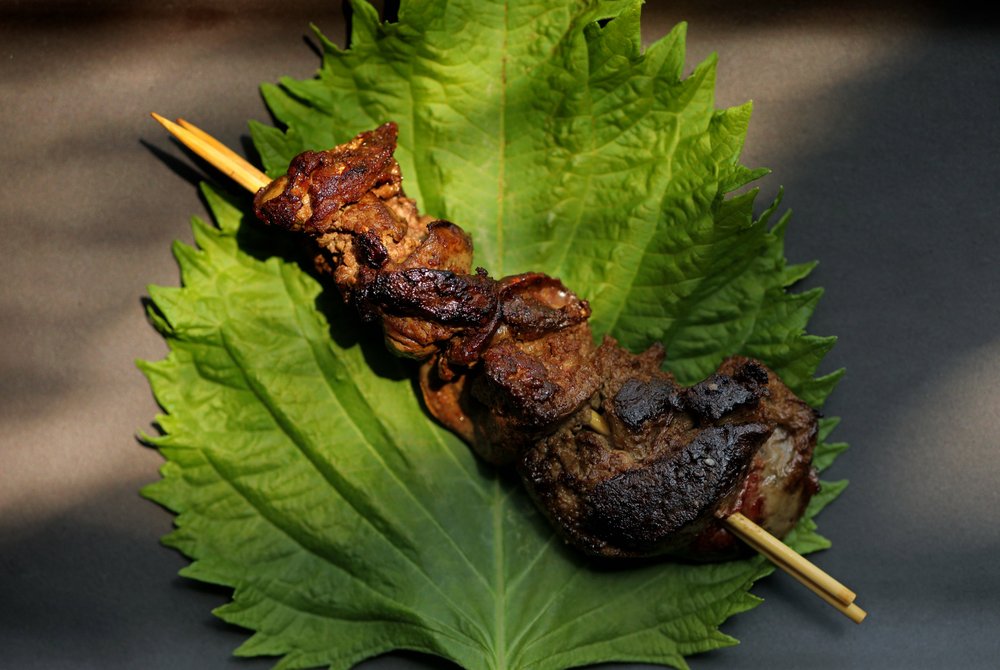 Thread each liver onto 2 skewers side by side and sprinkle generously with salt. Place skewers on grill directly over heat or on a large skillet in batches over medium-high heat. Turn a few times until thoroughly cooked. Remove from heat and serve.