3rd-country application rule in force while it’s challenged by Compiled by Democrat-Gazette staff from wire reports | September 12, 2019 at 4:13 a.m. 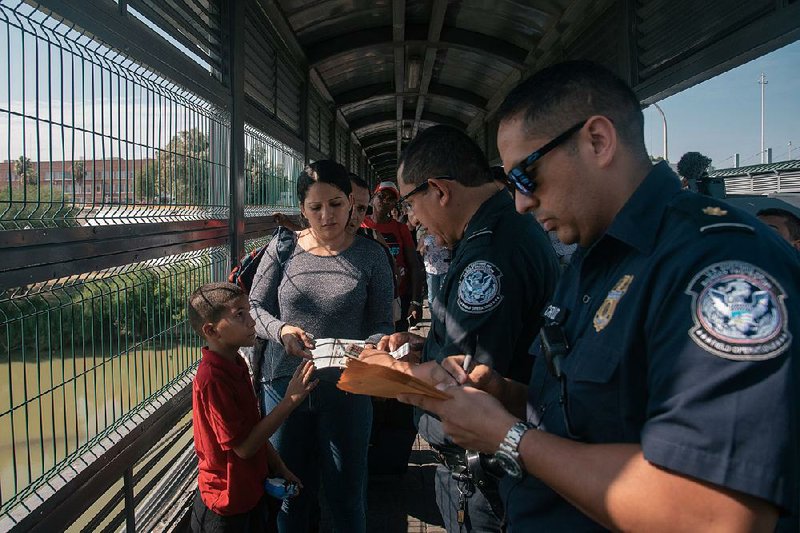 U.S. Customs and Border Patrol officers check the papers of a Venezuelan family seeking asylum on July 10 on the international bridge between Laredo, Texas, and Nuevo Laredo, Mexico. The U.S. Supreme Court ruled Wednesday that the government can begin denying asylum requests from migrants except those who have been denied asylum in another country or are victims of “severe” human trafficking.

WASHINGTON -- President Donald Trump's administration can begin denying asylum requests from migrants at the southern border who have traveled through Mexico or another country without seeking protection there, after the Supreme Court on Wednesday decided to lift a lower court's injunction.

The justices put on hold a lower court's ruling that the administration's rule change could not be enforced pending additional legal action because it likely ran afoul of administrative law requirements. But in a brief, unsigned order, the Supreme Court allowed the rule to go into effect while legal challenges move forward.

Only Justices Sonia Sotomayor and Ruth Bader Ginsburg noted their disapproval of the action.

"Once again the Executive Branch has issued a rule that seeks to upend longstanding practices regarding refugees who seek shelter from persecution," wrote Sotomayor.

"Although this Nation has long kept its doors open to refugees -- and although the stakes for asylum seekers could not be higher -- the Government implemented its rule without first providing the public notice and inviting the public input generally required by law."

Trump's policy is one of the administration's most significant efforts to deter asylum seekers at the southern border, and it is one of multiple tools federal immigration officials have deployed to prevent families and other asylum seekers from entering the United States.

In a statement on Wednesday night, the White House said the decision means that "the administration can implement important, needed fixes to the broken asylum system. This greatly helps build on the progress we've made addressing the crisis at our southern border and will ultimately make American communities safer."

Under the policy, only migrants who have been denied asylum in another country or who have been victims of "severe" human trafficking are permitted to apply in the United States. "The rule thus screens out asylum seekers who declined to request protection at the first opportunity," Solicitor General Noel Francisco wrote in a Supreme Court brief.

The rules reversed long-standing asylum policies that allowed people to seek haven no matter how they got to the United States.

A record number of Central American families have sought asylum in the past year, and most have been released to await court hearings. The Justice Department has said more than 436,000 pending cases include asylum applications.

The Trump administration announced the rule change July 15, and four migrant-rights groups challenged it. Federal District Judge Jon Tigar in California ruled that the policy was likely invalid because it is inconsistent with federal law. Tigar, who was appointed by President Barack Obama, also said the rule violated the Administrative Procedures Act, and he issued a nationwide injunction.

A panel of the 9th Circuit Court of Appeals said the judge went too far. The policy likely violated the Administrative Procedures Act, it said, but the injunction should be limited to states within the 9th Circuit's jurisdiction. That meant the rule change could not be implemented along the California and Arizona borders. The other southern border states, New Mexico and Texas, are in different circuits, and a U.S. Citizenship and Immigration Services official speaking on background said the new rule is being applied in those border areas.

On Tuesday, the 9th Circuit temporarily blocked the new injunction and ordered the two sides to submit briefs on whether it should issue a stay.

Even before Tigar's latest ruling, Francisco had asked the Supreme Court to allow the new rule to be implemented everywhere while the legal battle continues.

Congress gives the Departments of Justice and Homeland Security authority to impose additional restrictions on asylum seekers beyond those in federal law, Francisco argued. He said the new requirement "alleviates a crushing burden on the U.S. asylum system by prioritizing asylum seekers who most need asylum in the United States."

"In turn, the rule deters aliens without a genuine need for asylum from making the arduous and potentially dangerous journey from Central America to the United States," he added.

Francisco argued that the administration was entitled to skip ordinary notice and comment requirements for new regulations because foreign affairs were at issue and because a delay after the announcement of the procedures "may prompt an additional surge of asylum seekers."

The migrant-rights groups were represented by the American Civil Liberties Union. They called the rule change a "blatant end-run around Congress" and a "tectonic change to U.S. asylum law" that should not be allowed without a full briefing on its merits.

"Allowing the ban to go into effect would not only upend four decades of unbroken practice, it would place countless people, including families and unaccompanied children, at grave risk," wrote ACLU lawyer Lee Gelernt. The administration's claim of a crisis at the border "cannot justify ignoring the laws Congress passed," Gelernt wrote.

"The current ban would eliminate virtually all asylum at the southern border, even at ports of entry, for everyone except Mexicans (who do not need to transit through a third country to reach the United States)," the ACLU's brief said.

Since 1980, the U.S. has said that those who say they are fleeing persecution and violence in their home countries have the right to at least apply for asylum. The current case was the Trump administration's second attempt to change that guarantee.

In December, the Supreme Court on a 5-4 vote refused to lift a stay on Trump's first attempt. It would have denied asylum requests from anyone who entered the country at any place other than an authorized "port of entry."

A panel of the 9th Circuit said that change was clearly at odds with federal law. Chief Justice John Roberts joined the court's four liberals in keeping the stay in place while the legal battle continued.

The administration has not yet filed a petition with the Supreme Court to ask it to review the merits of that case.

Information for this article was contributed by Robert Barnes and Nick Miroff of The Washington Post; by Adam Liptak of The New York Times; and by Greg Stohr of Bloomberg News.