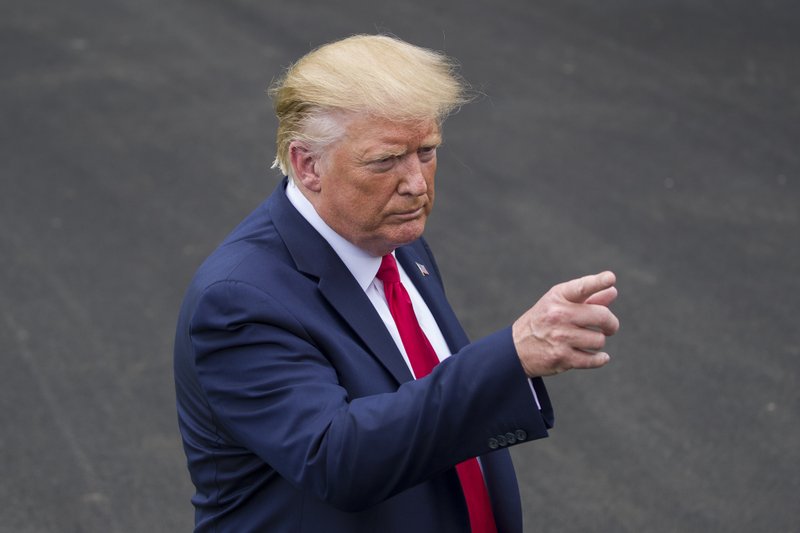 In this Sept. 9, 2019, file photo President Donald Trump speaks with reporters before departing on Marine One from the South Lawn of the White House in Washington. (AP Photo/Alex Brandon, File)

WASHINGTON -- President Donald Trump escalated his attacks on the Federal Reserve on Wednesday, demanding that it slash interest rates to zero "or less" so the federal government can refinance the public debt that has ballooned during his administration.

The president has repeatedly complained that the European Central Bank's use of negative interest rates to spur growth tilts global markets against U.S. companies. But the comments marked his first call for the Fed to embrace similar emergency steps and were at odds with his customary boasts about the strength of the U.S. economy.

Negative rates, which have been used in economies including Japan, Switzerland and the eurozone, mean savers are penalized and borrowers rewarded: The goal of the use of negative rates is to reduce borrowing costs for households and companies to encourage spending. But they come at a cost, curbing bank profitability.

In a pair of early-morning tweets, the president assailed Fed Chairman Jerome Powell and his central bank colleagues as "Boneheads" for not moving more aggressively to cut interest rates. Trump appointed four of the five members of the Fed's board of governors, including Powell, a frequent target of his tweets.

"The USA should always be paying the lowest rate," Trump tweeted. "No Inflation! It is only the naivete of Jay Powell and the Federal Reserve that doesn't allow us to do what other countries are already doing. A once in a lifetime opportunity that we are missing because of 'Boneheads.'''

The president has said repeatedly that the economy is doing "great" and has accused the media and Democrats of trying to sow economic uncertainty.

Trump's tweets come on the heels of a disappointing jobs report and a week before the Fed rate-setting committee's next meeting. Trump this year has repeatedly attacked the Fed in tweets and public comments, blaming it for any sign of economic weakness even as many economists point to the unintended consequences of his trade war.

In July, the Fed cut the benchmark interest rate for the first time in more than a decade, lowering it by a quarter-point, to just below 2.25%. At the time, Powell said the president's on-again, off-again tariff threats were chilling business investment and spreading uncertainty through the global economy. The central bank chief said the Fed would do whatever was necessary to "sustain the expansion," but he stopped short of promising further reductions.

The last time the Fed cut rates to zero was during the recession, and it has never adopted negative rates, even during the 1930s when one-quarter of the labor force was idle. Despite Trump's impatience with the central bank, there is little sign that current interest rates are hindering the economy.

"Credit conditions are about as supportive as they have ever been," the National Federation of Independent Business reported in its most recent survey of small-business owners. Likewise, a significant share of large banks eased loan terms, including extending larger credit lines, for their customers, according to the Fed's latest survey of lending officers.

While it's unclear how effective other countries' negative rates have been as a policy tool -- some research suggests they could curtail lending -- they are increasingly a reality in much of the world as central banks rush to support economic growth and investors look for safe assets.

The European Central Bank is expected to cut a key interest rate to a record-low negative 0.5% and roll out additional stimulus measures at its meeting today in a bid to shore up very-low inflation and waning growth in important economies such as Germany's. Central banks around the world have been lowering their policy rates, partly because Trump's trade war is combining with jitters over Britain's coming exit from the European Union and a global manufacturing slowdown to threaten growth in many nations.

But economists and policymakers worry that the negative rates are destabilizing the European economy by draining banks, creating conditions that are primed for a crisis.

The president's demand that the Fed potentially adopt unprecedented monetary stimulus came less than 24 hours after he said "the economy is booming" in a speech to a Washington audience.

"The president is calling for what essentially are emergency monetary policy measures at a time when unemployment is at a 50-year low, the U.S. economy is doing better than its peers' and is still growing," said David Wessel, director of the Hutchins Center on Fiscal and Monetary Policy.

Trump's call to refinance nearly $17 trillion in outstanding public debt also is oddly timed and would be unlikely to save the government much money. Since the 2008 financial crisis, the government has extended the average maturity of its debt to nearly 69 months from about 48, according to the Treasury Department. The current repayment length is above the average over the past 40 years and near the historic high reached in 2001.

As investors have grown more nervous about the global economy, they have poured money into U.S. Treasury bonds, seeking the assurance of a guaranteed return and liquid markets. That has driven the federal government's borrowing costs to near-record lows: 1.7% interest to borrow money for 10 years and 2.2% for 30-year funding.

Last month, the Congressional Budget Office slashed $1.4 trillion off the government's estimated interest payments over the next decade, saying it expected borrowing costs to be lower than it projected in May.

Government debt, now at a historic high, has climbed more than $2 trillion on Trump's watch and is expected to grow by an additional $12 trillion over the next decade, according to the Congressional Budget Office. That's because the government is spending much more than it brings in each year through taxes. The Republican-sponsored 2017 corporate and personal income tax cut and big spending increases from Congress in recent years have widened the budget deficit, which is projected to exceed $1 trillion this fiscal year.

"We should be focusing more on reducing that debt by looking at what's creating that debt rather than at refinancing that debt," said William Hoagland, senior vice president of the Bipartisan Policy Center and a former Republican staff director of the Senate Budget Committee. "This is a clever way of avoiding talking about the real issue."

To refinance the outstanding debt, Washington would need to first buy back from investors existing Treasury securities, many of which are trading above their face value, before replacing them with new, lower-rate bonds. "You're really not saving anything," said Mark Heppenstall, chief investment officer of Penn Mutual Asset Management, which manages $27 billion of investor assets.

In recent years, the Treasury Department has considered capitalizing on low borrowing costs by issuing 50- or even 100-year bonds. Officials have held off, fearing the longer duration securities would cannibalize demand for other government debt. But during talk that U.S. officials are reconsidering, Heppenstall said he thinks there would be adequate investor interest in longer-term securities.

Information for this article was contributed by David J. Lynch and Taylor Telford of The Washington Post and by Jeanna Smialek of The New York Times.