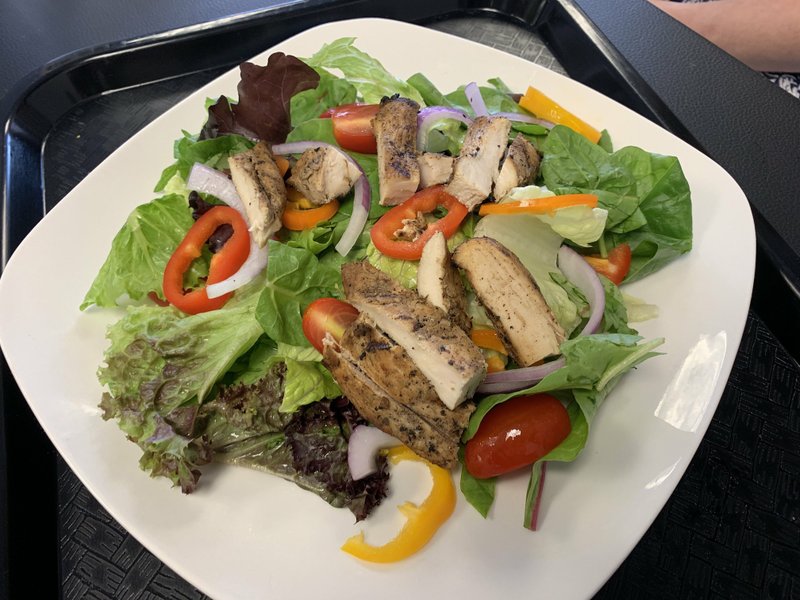 The jerk chicken on the Jerk Chicken Salad at Yeh Mon Jamaican Restaurant on west Little Rock's North Bowman Road was prepared to order, so it tasted just as fresh as the greens, bell peppers and cherry tomatoes underneath. Arkansas Democrat-Gazette/Eric E. Harrison

It's not like central Arkansas has never had any exposure to Jamaican cuisine.

Jerk chicken and jerk pork (named for the spice, not for the way folks feel about the cook) have appeared on several menus over the years. It was even at the heart of what John Walker Jr. called his "Jamerican" menu at Jerkys Spicy Chicken & More, which went through any number of travails before and after it moved from Arch Street downtown to Center Street.

But the demise of Jerkys left a Caribbean-size hole in the central Arkansas cuisine scene. Up until a couple of months ago, at any rate.

Now you have a pair of west Little Rock Jamaican restaurants from which to choose:

• Taste of Jamaica, in almost the exact center of the Rodney Parham Road strip-center retail sprawl between Markham Street on the south and Hinson Road to the north.

• And, within the past couple of weeks, the long-awaited Yeh Mon Jamaican Restaurant, in the Bowman Curve II center on North Bowman Road, next door to Lazy Pete's.

The menus are very similar — jerk chicken, of course; brown-stewed chicken; curry chicken; red snapper (usually a cook-to-order item at both places). We don't remember seeing oxtails at Taste of Jamaica but that doesn't mean they don't sell them. On the other hand, Yeh Mon doesn't appear to have a daily "saltfish."

The setup is also surprisingly similar: Order at the counter, from a selection either of regular daily items on the hot table that you get served immediately, or from items that must be made to order, which take a few minutes.

Like Taste of Jamaica, Yeh Mon is family-run. Proud papa Patrick Blackburn supervises; his voluble son takes your order and dishes up the food; mom makes the house-made desserts. Like Taste of Jamaica, Blackburn's accent — as well as those of a surprisingly large number of the customers we encountered — proves the food is authentic.

They run a tighter ship than the Taste of Jamaica folks do, although you shouldn't in any way consider them martinets. (Sitting down with customers when they're not busy is apparently normal; flirting with customers, maybe, maybe not.) You do order off a menu here — we kind of felt the one at Taste of Jamaica is to be more of a guideline than a framework.

And the Yeh Mon folks don't automatically assume customers have a working knowledge of Jamaican food, though, of course, many do. (Those customer accents range from just a touch of the sea to full-out Caribbean.) Here they go rather the other way to make sure diners have as full an advance knowledge as possible of what they're going to get.

The decor at Yeh Mon is comparatively austere — no Jamaican flags, portraits of track star Usain Bolt or ganga-focused posters. The walls are white, with one "Love"-centered piece of art in a vaguely Jamaican color scheme for accent; the tables are covered in slightly padded black plastic with sturdy but easily movable chairs. Setups are genuine, though inexpensive, tableware wrapped in paper napkins (plastic forks are also available). Eat-in items come on white porcelain plates but, as was the case with our first meal, they'll put your food in a foam takeout container to make taking leftovers home easier, if there's even a hint that there will be leftovers. (It's also, by the way, a convenient compartmentalized way to care for fussy eaters who worry their food will touch.)

We started, as we must, with the jerk chicken ($10), off the hot table, most of it bone-in but tender enough, for the most part, to either fall off or easily peel off the bones. Yeh Mon's jerk seasoning, in which the chicken supposedly marinates for 24 hours, has a nice kick but doesn't rate an alarm. (Hot sauce, supposedly hot enough to injure unwary customers, used to be on the table, but now you have to ask.) We got a true "traditional Jamaican meal," the chicken served over brown rice and "peas" (more like red or kidney beans) with sides: too few slices of moist plantain and a tangy carrot-and-cabbage melange.

Intrepid Companion was intrigued enough to order the Jerk Chicken Salad ($10), for which the jerk chicken was prepared to order, square-edged strips and spiced just perfectly, so that it tasted just as fresh as the greens, bell-pepper strips (red, yellow and orange) and cherry tomatoes that formed the salad bed. Italian dressing, served in small plastic cups, was just the right choice too.

Curry Shrimp ($12) is a weekend dish, served Friday and Saturday only, also prepared to order: a half-dozen firm, midsize, tail-off shrimp swathed in a yellow family-recipe curry, perfectly spiced without being incendiary, served over white rice with a side salad of the same composition as the one underneath the jerk chicken (though, now that we think back, without the peppers). We couldn't have been more pleased, and it bodes well if you order the Curry Chicken ($10) and the Curry Goat ($12 small, $16 large), both marinated — the chicken for 24 hours, the goat for 24-48.

We were puzzled by how fast Yeh Mon's Jamaican Beef Patties ($3 per) were flying out the door until we tried one: a pocket pastry filled mostly with air and a thin layer of luscious spiced ground-beef mixture. Piercing the shell let out the air and flattened the pie, making the whole thing a little easier, though not less messy, to eat.

A cooler between the door and the sneeze-guarded line holds a variety of 12-ounce authentic Jamaican sodas ($2.50, which seems steep until you realize what most places charge for a Coke these days), including the Kola Champagne, which has no actual alcohol and the taste of which we would place closest to cream soda — except that there is also a cream soda. The orange soda has natural flavors; the pineapple soda doesn't. On our first visit there was canned ginger ale; they've since brought in authentic bottled Jamaican ginger beer.

We mentioned the desserts, little Bundt-like $3 cakes that are made on the premises and so popular that out of the dozens per alternating-day baked, they were also disappearing at a record rate. On our first visit, we managed to score a delicious strawberry cake with a delicious strawberry cream-cheese icing, but those were long gone by the next time we dropped in (with customers coming periodically through the door asking when they'd be back). We also missed out on the mini rum cakes made with, of course, Jamaican rum (with or without pecans). In fact, there were a mere three honey bun cakes ($4) left in the cooler, so we snagged one of those and were quite pleased — it wasn't as sweet either as we expected or as it looked.

As at Taste of Jamaica, you bus your own table — please, however, don't accidentally throw the plates away.