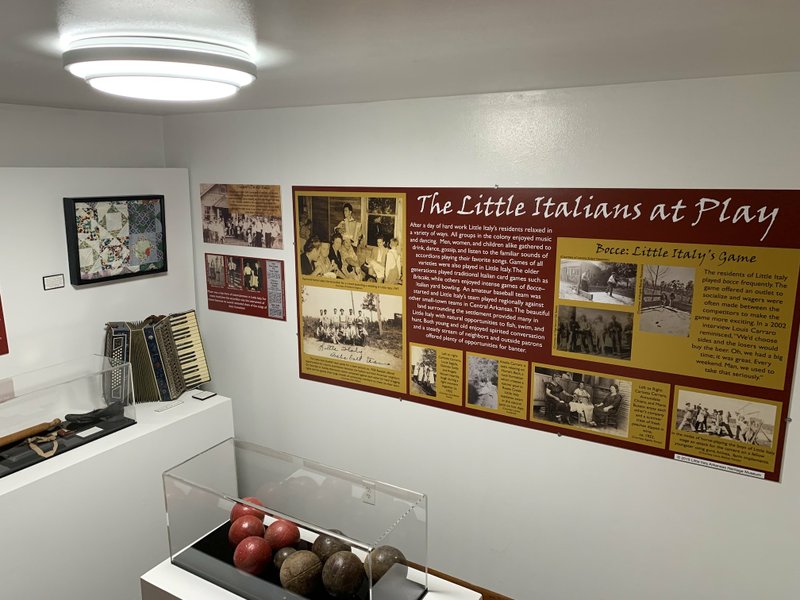 Exhibits at the Little Italy Arkansas Heritage Museum, like this one about games and fun in the central Arkansas community, include a collection of family heirlooms and artifacts passed down through generations. Arkansas Democrat-Gazette/Jennifer Nixon

The wood-frame house on Arkansas 300 looks small and unassuming, surrounded by trees and fields. But the inside is packed with treasures and stories, detailing the deep, rich history of a place and a people.

Little Italy is a close-knit community with a shared faith, culture and history that includes Ellis Island, Prohibition, tragedies and successes.

"How more unified can you be than to have this beautiful history?" asks curator Chris Dorer.

"This is an American story," adds Kristy Eanes, a descendant of the community's original settlers.

The people here are proud of their heritage, which they've shared for more than 90 years at their Italian Festival in October. But now, they have a more permanent, year-round way to tell their story: the new Little Italy Arkansas Heritage Society and Museum.

It's a labor of love for the community as a whole and for Dorer. The money, stories, photos and artifacts for the museum were donated by the families and descendants.

"I think [people] are going to be surprised by the depth of the history here," he says. "There are some amazing things that have lasted the last 100 years."

Dorer is the community historian and has been, even if unofficially, for about 20 years, since he was a senior at the honors college at the University of Central Arkansas. For his senior project, he did an oral history compilation of the stories he heard growing up in Little Italy and put them in a book.

He still has those oral histories and hopes that, someday, they'll be able to incorporate the audio into the exhibits.

The exhibits tell the story of the nearly 20 families who moved to central Arkansas from Italy, most of them coming from Chicago. Unhappy with their living situation there, a group bought cleared timberland in the rural area near Little Rock and began farming. They built a church, started wineries and created a place where they could live, raise their families and, as Dorer says, "establish their culture and their faith in what was then the Arkansas wilderness." They originally called their community Alta Villa, "The High Place."

Stories and photos of those families line the walls of the museum. There are also many treasures: Ellis Island documents, passports, land receipts, advertisements, bottles from the original wineries, casks, a grape scale.

"It's really great to be able to share, as a descendant, our family's objects," Eanes says. "Otherwise, they'd be sitting collecting dust."

The different rooms divide life in Little Italy into different categories, with special attention paid to the grape-growing, wine-making industry and Prohibition. While Prohibition could have killed the area's agriculture and commerce, local politicians, recognizing the value of the Italian community and the work they were doing, used their influence to protect the community's liquor production businesses.

The stories and photos create a real connection to the past and the people here: photos of children outside a school, families working in the fields. Tales of a wedding night. A teen-age girl's memory book detailing the many community dances she attended.

The museum had a "soft opening" in June, but Sunday is the official opening celebration. Dorer will lead guided tours and the museum gift shop will be open.

For the first couple of hours, there will be music by Don Curdie of the Arkansas Accordion Association, door prizes, giveaways, cookies to sample and buy and Repicci's Italian Shaved Ice.

To get a literal taste of how Arkansas' early Italian community lived, there will be polenta samples.

"We're giving it a little twist," Dorer says. "We're not putting anything on the polenta. We want people to taste what they would have eaten."

Admission is free, but donations are encouraged to help support the museum's operations and future growth. 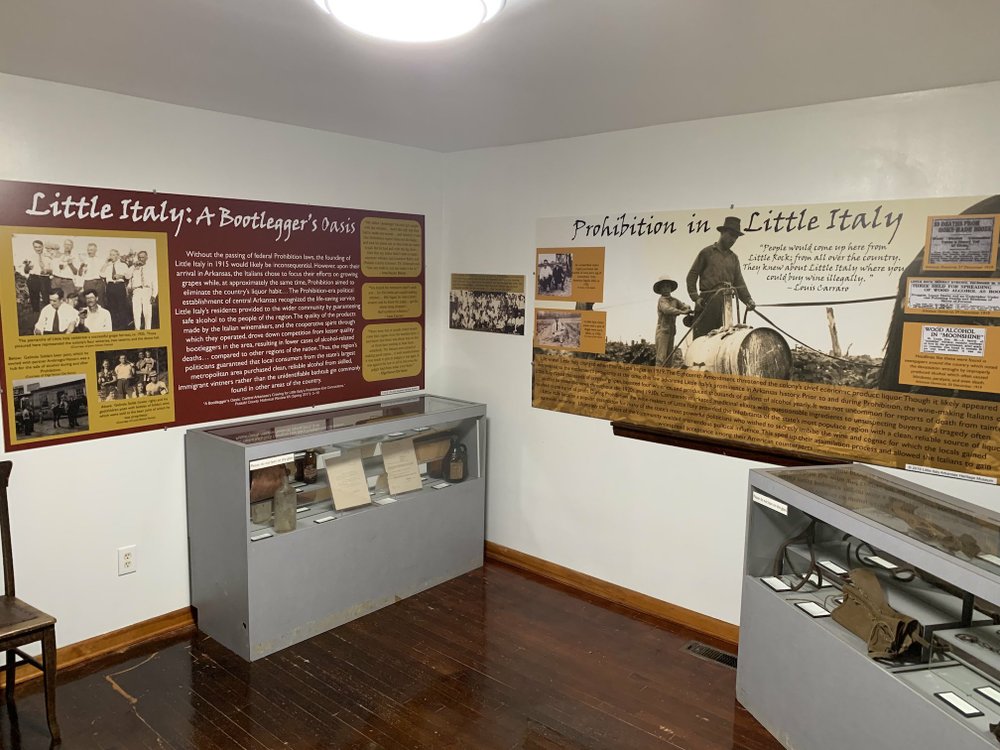 They have hopes to someday restore the community's former beer hall and move it onto the museum property.

Dorer and Eanes say the museum itself is a living, breathing thing and will not stay static. There are many more treasures to rotate in and out and they have space for small temporary exhibits.

They founded a 501c3 society and are excited to get to share that history with not only their younger generations but with the community at large.

Eanes says, "This is our Little Italy and it belongs to everyone."

"That's one of the driving reasons for it: to make sure people know we're here," Dorer says. "We are unified. We are here. We are real."