President Donald Trump greets people Wednesday during a ceremony at the Pentagon honoring victims of the Sept. 11, 2001, terrorist attacks.

WASHINGTON -- President Donald Trump vowed Wednesday to strike back with power the United States "has never used before" if the country faces an attack similar to those that occurred Sept. 11, 2001, pledging that any perpetrators "will never have seen anything like what will happen to them."

The president spoke at the Pentagon during a memorial on the 18th anniversary of the attacks. The coordinated al-Qaida hijackings killed nearly 3,000 people when airliners slammed into the World Trade Center and the Pentagon and when another crashed in Shanksville, Pa.

"The last four days, we have hit our enemy harder than they have ever been hit before, and that will continue," Trump said, apparently referring to the war in Afghanistan. "And if for any reason they come back to our country, we will go wherever they are and use power the likes of which the United States has never used before -- and I'm not even talking about nuclear power. They will never have seen anything like what will happen to them."

The appearance was Trump's third commemorating the Sept. 11 attacks since becoming president. Last year, he visited Shanksville, where he paid tribute to the passengers of Flight 93, who died disrupting the plan of terrorists to crash one of their hijacked planes into the U.S. Capitol.

At the Pentagon on Wednesday, Trump told attendees that "for every American who lived through that day, the Sept. 11 attack is seared into our soul."

He noted that he had called off negotiations over the withdrawal of U.S. troops from Afghanistan after the Taliban took responsibility for an attack last week that killed a U.S. soldier. Trump had invited Afghan and Taliban leaders to Camp David but announced on Twitter that he had canceled the previously undisclosed summit.

"We had peace talks scheduled a few days ago," Trump said. "I called them off when I learned that they had killed a great American soldier from Puerto Rico and 11 other innocent people. They thought they would use this attack to show strength, but actually, what they showed is unrelenting weakness."

The president also discussed what he was doing when he heard the news of the attacks 18 years ago. He said he was at home watching television.

"I vividly remember when I first heard the news, I was sitting at home watching a major business television show early that morning," Trump said. "Jack Welch, the legendary head of General Electric, was about to be interviewed when all of a sudden they cut away."

He said he watched from his apartment, which is about 4 miles from the World Trade Center, as the second of the planes hit the site on the morning of the attacks.

"I was looking out a window from a building in midtown Manhattan directly at the World Trade Center when I saw a second plane at a tremendous speed go into the second tower," he said. "It was then that I realized the world was going to change."

Trump has made a variety of claims about what he was doing on the morning and in the aftermath of the attacks. He previously said he watched through a telescope as "many people" jumped from the twin towers. During the 2016 campaign, Trump also falsely claimed that "thousands" of New Jersey Muslims celebrated the attacks.

On Wednesday, Trump also participated in a moment of silence on the White House lawn at 8:46 a.m. -- the time the first plane hit the twin towers -- before heading to the Pentagon.

Meanwhile, al-Qaida on Wednesday released a video in which leader Ayman al-Zawahri called for Muslims to attack U.S., European, Israeli and Russian targets.

SITE Intelligence Group, which tracks online activity of jihadi groups, reported that in the video, the 68-year-old al-Zawahri also criticizes "backtrackers" from jihad, referring to former jihadis who changed their views in prison and called the 9/11 attacks unacceptable because innocent civilians were harmed.

"If you want jihad to be focused solely on military targets, the American military has presence all over the world, from the East to the West," he said. "Your countries are littered with American bases, with all the infidels therein and the corruption they spread."

Al-Zawahri, an Egyptian, became leader of al-Qaida after the 2011 killing of Osama bin Laden in Abbottabad, Pakistan, by Navy SEALs. Al-Zawahri is believed to be hiding somewhere in the Afghanistan-Pakistan border regions. A July report by the United Nations cited reports that he is "in poor health" but provided no details.

Information for this article was contributed by Felicia Sonmez, John Wagner and JM Rieger of The Washington Post and by staff members of The Associated Press. 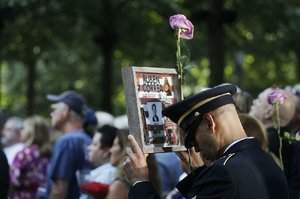 Photo by AP/MARK LENNIHAN
A responder at the national memorial in New York carries a marker Wednesday for fallen firefighter Ruben Correa on the 18th anniversary of the Sept. 11, 2001, terrorist attacks. President Donald Trump, speaking at the Pentagon, vowed to strike back with power the U.S. “has never used before” if another attack happens. More photos are available at arkansasonline.com/912sept11/