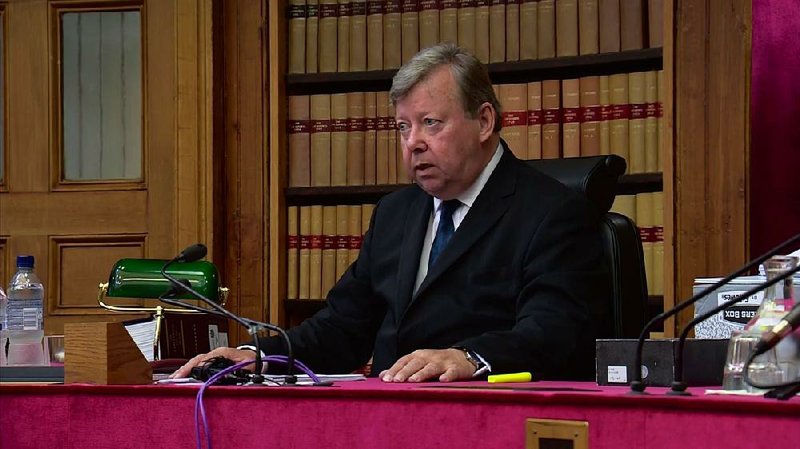 In this image taken from video on Wednesday, Sept, 11, 2019. Lord Carloway, Scotland's most senior judge: speaks at a court in Edinburgh, Scotland. The Scottish court ruled that Britains Prime Minister Boris Johnson's decision to suspend the U.K. Parliament was unlawful, but did not order the suspension overturned. Judges said Britain's Supreme Court must make the final decision.

LONDON -- A Scottish court dealt another blow to Prime Minister Boris Johnson's Brexit plans Wednesday, ruling that his decision to suspend Parliament less than two months before the U.K. is to leave the European Union was an unlawful attempt to avoid democratic scrutiny.

The government immediately said it would appeal, while the political opposition demanded that Johnson reverse the suspension and recall lawmakers to Parliament.

Johnson insists that the country must leave the EU on Oct. 31, with or without a deal to smooth the way. But many lawmakers fear a no-deal Brexit would be economically devastating, and they are determined to stop him.

Johnson says he shut down the Parliament this week so he can start afresh on his domestic agenda at a new session next month. But the five-week suspension also gives him a respite from rebellious lawmakers as he decides his next move to break the political impasse and lead Britain out of the EU.

A panel of three Court of Session judges in Edinburgh said Wednesday that "the only inference that could be drawn was that the U.K. government and the prime minister wished to restrict Parliament."

One of the judges, Philip Brodie, said it appeared that the suspension was intended "to allow the executive to pursue a policy of a no-deal Brexit without further parliamentary interference."

The judges on Scotland's highest civil court declared the suspension "null and of no effect," but said Britain's Supreme Court must make the final decision at a hearing starting Tuesday.

Scotland has a separate legal system from England and Wales; the Supreme Court, which is in London, rules on matters relating to both jurisdictions.

The Scottish court's ruling came after the opposition lawmakers challenged the government's decision to shut down Parliament until Oct. 14 -- just over two weeks before Britain is to leave the EU.

Last week, a court in Edinburgh rejected the lawmakers' challenge, saying it was an issue for politicians to decide, but that was overturned Wednesday on appeal.

The British government said it was disappointed by the decision and would appeal to the Supreme Court.

It noted that another challenge to the suspension, filed by transparency campaigner Gina Miller, was rejected at the High Court in London last week by judges who said the decision was inherently political and "not a matter for the courts."

Johnson on Wednesday denied that he was being anti-democratic.

"If opposition members of Parliament disagree with our approach, then it is always open to them to take up the offer that I've made twice now -- twice! -- that we should have an election," he said in an online question-and-answer session. "There is nothing more democratic in this country than a general election."

Opposition politicians, however, insisted that the government must recall Parliament. Lawmakers were sent home this week despite the objections of House of Commons Speaker John Bercow and opposition lawmakers, who held up signs in the chamber saying, "Silenced."

"You cannot break the law with impunity, Boris Johnson," Joanna Cherry, one of more than 70 opposition lawmakers who took the case in Scotland, told reporters outside the court in Edinburgh. "The rule of law will be upheld by Scotland's courts, and I hope also the Supreme Court of the United Kingdom."

The leader of Cherry's Scottish National Party, Nicola Sturgeon, called for Parliament to be "recalled immediately to allow the essential work of scrutiny to continue."

The Labor Party joined that demand. "He should do the right thing now, which is to reopen Parliament, let us back to do our job and to decide what to do next," said Keir Starmer, the party's spokesman on Brexit.

A government spokesman ruled out recalling Parliament at least until the Supreme Court has a chance to weigh in.

A number of opposition politicians returned to Parliament on Wednesday anyway, as a way to protest the shutdown. Some lawmakers tweeted pictures of themselves sitting on empty green benches in the House of Commons.

Britain's 2016 decision to leave the EU has left the country's politics gridlocked and has tested the limits of the U.K.'s largely unwritten constitution.

With a no-deal Brexit looming, some members of the governing Conservatives joined with the opposition to deliver a series of votes against Johnson in the days before Parliament was suspended. They passed a law that orders the government to seek a three-month delay to Brexit if no agreement has been reached by late October, and they twice rejected Johnson's call for a snap general election.

The court ruling came on the same day that the government gave in to a demand from lawmakers and published a document showing its assessment of the fallout from a hard Brexit.

According to the document, the government estimated that the number of trucks crossing the main freight route between Calais, France, and Dover, England, would drop by between 40% and 60% within a day, with disruptions possibly lasting up to three months. The supply of certain types of fresh foods and essential medicines would decrease, prices would go up, and poor people would be hit hardest.

The paper, dated Aug. 2, sets out the government's "reasonable worst-case planning assumption" for a no-deal Brexit and describes major disruption for travelers between Britain and the EU and uncertainty for U.K. citizens living in Europe. It says attempts to maintain an open border between Ireland and Northern Ireland would probably fail. It also says a no-deal exit could trigger protests and even riots.

The government refused to comply with another part of Parliament's demand -- that it hand over emails and text messages among officials and aides discussing the decision to suspend Parliament. Michael Gove, the minister in charge of Brexit planning, said the request was inappropriate and disproportionate.

Information for this article was contributed by Jill Lawless and Frank Jordans of The Associated Press; and by Griff Witte and Karla Adam of The Washington Post.