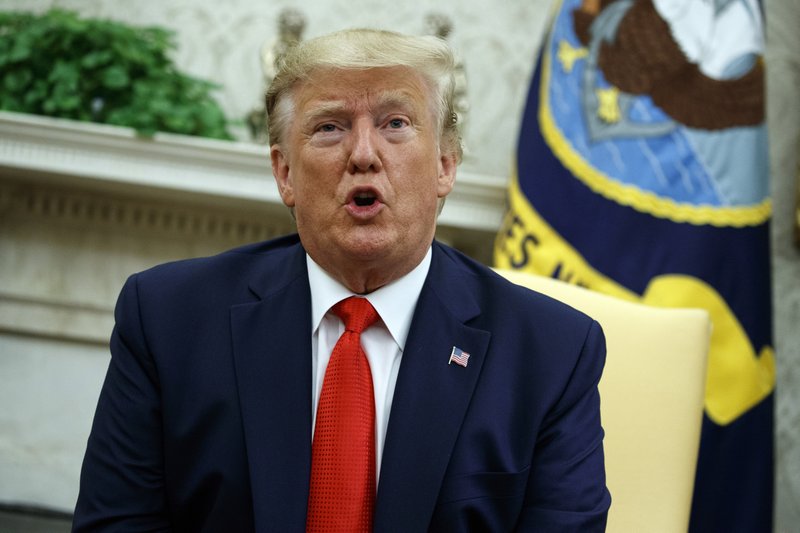 President Donald Trump talks about a plan to ban most flavored e-cigarettes, in the Oval Office of the White House, Wednesday, Sept. 11, 2019, in Washington. (AP Photo/Evan Vucci)

WASHINGTON -- Senators pushing to require background checks for private gun sales made a fresh pitch to President Donald Trump on Wednesday as part of an effort to break the gridlock over legislation to curb gun violence.

Republican Sen. Patrick Toomey of Pennsylvania and Democratic Sens. Joe Manchin of West Virginia and Chris Murphy of Connecticut cautioned that they did not win Trump's endorsement of their background-check bill during their 40-minute telephone conversation. But they nonetheless depicted the president as engaged and encouraging, with Toomey saying Trump has a strong "interest in doing something meaningful" to prevent gun violence, even though he has not endorsed any specific approach.

The outreach is the latest effort to try to traverse the impasse on gun-control legislation. With Congress back in session this week, Republicans and Democrats have been pointing fingers, with Senate Majority Leader Mitch McConnell accusing Democrats of engaging in "theatrics" and House Speaker Nancy Pelosi warning that "people are dying" while Senate Republicans refuse to act.

Meanwhile, all sides are waiting on clear guidance from Trump on what he might support.

[Video not showing up above? Click here to watch » https://www.youtube.com/watch?v=8oIQTerR7HA]

White House officials, lawmakers and Capitol Hill staff members have held frequent meetings to discuss options aimed at curbing gun violence after a pair of shootings in Dayton, Ohio, and El Paso, Texas, that left more than 30 people dead over a single August weekend. The president is expected to be presented with a list of options on various initiatives as soon as today, according to a senior administration official who spoke on condition of anonymity to discuss internal deliberations.

Speaking to reporters in the Oval Office shortly after the call, Trump said he and lawmakers were "working very, very hard together" and "seeing if we can come up with something that's acceptable to everybody."

But he offered few clues about what he is willing to support, even as he insisted that "progress is being made."