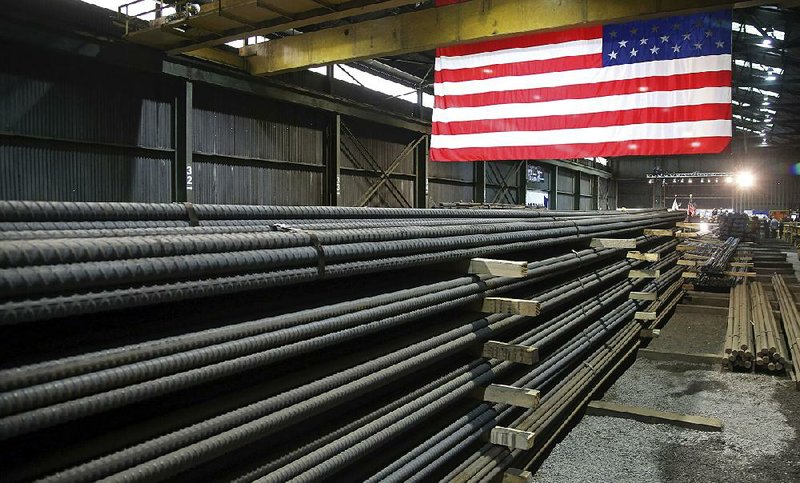 Steel rods produced at the Gerdau Ameristeel mill in St. Paul, Minn., sit ready for shipment in May. Japan hopes it can reach an agreement to be exempt from the Trump administration’s steel and aluminum tariffs and from the threat of auto tariffs. In exchange, Tokyo would grant America’s farmers greater access to the Japanese market.

But the administration hasn't exactly gone easy on America's friends, either. From Europe to Japan, the president has stirred up under-the-radar trade disputes that potentially could break kout within weeks or months with damaging consequences.

Trump is seeking, for example, to tax up to $25 billion in European Union imports in a rift over the EU's subsidies to the aircraft giant Airbus. It's also threatening to impose tariffs to punish France for a digital-services tax that targets U.S. Internet giants Google, Amazon and Facebook.

In November, Trump could take his aggressive policies into uncharted territory by imposing tariffs on foreign autos and auto parts. This move would risk igniting a conflict with Japan and the EU as well as with lawmakers on Capitol Hill.

The president's tough tactics have already shaken markets and rattled businesses that are struggling to decide where to expand or invest at a time when the rules of global commerce can be upended with one presidential tweet. Their uncertainty has contributed to a slowdown in global trade and growth.

"He doesn't seem to be deterred," said William Reinsch, a former U.S. trade official who is an analyst at the Center for Strategic and International Studies. "He seems to argue that these things are good and have a positive effect for America."

On trade, Trump is governing as he said he would. He casts the U.S. trade deficit -- $628 billion last year -- as indisputable proof that America is being ripped off by its trading partners and that the free-trade deals his predecessors negotiated are rigged against U.S. companies. As a candidate, Trump pledged to forge more U.S.-friendly deals and to deploy tariffs to bend other countries to his will.

Mainstream economists take a different view of America's trade deficit. They say it reflects a fundamental reality that won't yield to changes in trade policy: Americans consume more than they produce. And imports fill the gap.

Among Trump's numerous trade fights, his standoff with China has drawn by far the most attention. And for good reason: His administration is waging the biggest trade war since the 1930s against the world's second-largest economy in a fight over Beijing's aggressive push to supplant America's technological dominance. Trump has imposed tariffs on $360 billion in Chinese imports and is preparing to tax the remaining $160 billion in goods that have so far been spared.

Yet Beijing is hardly the only U.S. trading partner to draw Trump's fire. He has asserted that the EU's trade policies are even worse than China's and has threatened to use tariffs against the 28-country trade bloc, which has long been a vital U.S. ally.

The Office of the U.S. Trade Representative has drawn up lists of $25 billion in EU imports that the U.S. could hit with tariffs in retaliation for the bloc's support of Airbus.

Last year, the World Trade Organization ruled that the EU had indeed illegally subsidized Airbus. An arbitrator will decide how much compensation the United States is entitled to but could produce a figure that falls well short of what the Trump administration wants.

But the administration in May decided to postpone any action on autos for six months until mid-November.

Tariffs on auto imports would mark a drastic escalation of trade hostilities. The United States last year imported $192 billion worth of passenger cars and light trucks and an additional $159 billion in auto parts. Auto tariffs, which would disrupt manufacturing supply chains, raise prices for American consumers and open a diplomatic rift with Europe and Japan.

If Trump proceeds with the taxes, he would likely face push-back in Congress. Lawmakers are already considering legislation to scale back his authority to impose tariffs on national security grounds.

The president is using the looming tariffs to try to pry concessions from Europe and Japan. Last month, the EU agreed to import $270 million worth of U.S. beef annually. Trump credited his tariff threat.

Likewise, Japan hopes to reach an agreement that would exempt it from Trump's steel and aluminum tariffs and from the threat of auto tariffs. In exchange, Tokyo would grant America's farmers greater access to the Japanese market.

Information for this article was contributed by Kevin Freking of The Associated Press.