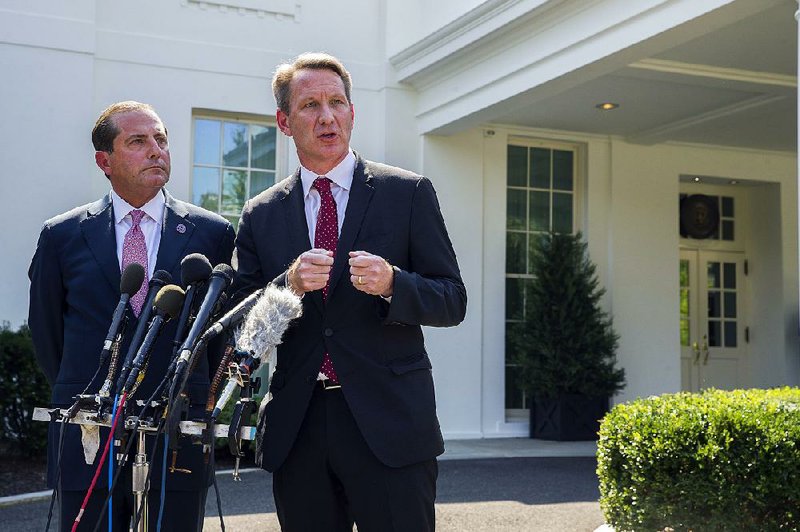 WASHINGTON -- Alarmed by the rapid rise in vaping by young people, the White House plans to remove most flavored e-cigarettes from the market, administration officials said Wednesday.

[Video not showing up above? Click here to watch » https://www.youtube.com/watch?v=URoCcFbRuMI]

It's unclear when the crackdown would commence.

"It'll take several weeks for us to put out the final guidance that would announce all the parameters around the enforcement policy. And then there will likely be about a 30-day delayed effective date, as is customary with FDA's good guidance practices," Azar told reporters. "At that point, all flavored e-cigarettes, other than tobacco flavor, would have to be removed from the market."

Producers of tobacco-flavored e-cigarettes could continue to sell their products for now, but would be required to file for FDA approval by May, Azar said.

Other flavors would be banned from the market absent approval from the FDA.

"This would include mint and menthol flavoring, as well as candy flavors, bubblegum flavor, fruit flavor, alcohol flavor. You get the drift," Azar told reporters.

American Cancer Society activists from Arkansas, who had urged lawmakers this week to address flavored e-cigarettes, learned about the White House crackdown after wrapping up a lobbying trip to Washington, D.C.

"I'm glad this issue is front and center and getting so much attention," said Ed Coulter of Mountain Home, a member of the American Cancer Society Cancer Action Network's national board of directors.

E-cigarette products in Arkansas and 32 other states have been linked to more than 450 "possible cases of lung illness," according to the federal Centers for Disease Control and Prevention.

Deaths have been reported in Oregon, California, Illinois, Indiana, Kansas and Minnesota.

Earlier this month, Michigan became the first state to bar the sales of flavored e-cigarettes.

On Monday, some members of the Arkansas General Assembly heard from experts and discussed options for regulating and taxing e-cigarettes. In this year's regular legislative session, lawmakers declined to pass any bills aimed specifically at curtailing e-cigarette use despite calls for stricter regulations or higher taxes from public health advocates and public school administrators. The next legislative session is scheduled for the spring.

The Family Smoking Prevention and Tobacco Control Act gives the FDA "the authority to regulate the levels of tar, nicotine, and other harmful components of tobacco products."

The 2009 law also gives the FDA power to regulate new tobacco products, as well as additives, including flavoring.

Health advocates have battled for more than a half-century to lower tobacco usage, noting its links to cancer, heart disease and strokes.

Smoking among young people is even lower. Just 7.6% of high school seniors reported smoking cigarettes over a 30-day period in 2018, according to a study by the Institute for Social Research at the University of Michigan.

But while eschewing traditional cigarettes, young people are increasingly embracing e-cigarettes, which come in a variety of flavors.

"Currently, about 8 million adults use e-cigarettes, but 5 million children are using e-cigarettes. This is exceptionally harmful to our children. An entire generation of children risk becoming addicted to nicotine because of the attractiveness, appeal-ability and availability of these vaping products," Azar said.

Electronic cigarettes, which were introduced in Europe in 2006, quickly spread to the U.S., eventually becoming a multibillion-dollar industry.

Trump said vaping is "causing a lot of problems."

"We're looking at very strong rules and regulations. We already have laws as we need them. But we want to get to the bottom of a very unusual situation. It's so new, and it's become so big, so fast. And it could be a potential very severe problem."

Supporters of the vaping industry said the restrictions would devastate small businesses and make it harder for cigarette smokers to break their addiction.

Gregory Conley, president of the American Vaping Association, accused Trump of adopting a "draconian approach to regulation and public policy."

"In the history of the United States, prohibition has never worked. It didn't work with alcohol. It hasn't worked with marijuana. It won't work with e-cigarettes," he said in a written statement. "A flavor ban will only lead to the creation of yet another multibillion-dollar black market that will operate with zero safety controls."

The crackdown also drew criticism from Citizens Against Government Waste, a nonprofit group opposed to "waste, mismanagement and inefficiency in government."

"The President's announcement is a misguided attempt to curb teen vaping and could potentially cause more dangerous counterfeit vaping products to be sold on the streets," said Elizabeth Wright, the group's director of health and science policy. "The administration needs to review all of the facts before rushing to put a ban on flavors for e-cigarettes that has helped millions of Americans quit smoking."

The decision drew praise from public-health advocates, including Matthew Myers of the Campaign for Tobacco-Free Kids.

"President Trump's announcement that the government will remove flavored e-cigarettes from the market is a necessary and long-overdue step to address the epidemic of youth e-cigarette use in the United States, but it must be comprehensive, immediate and long-lasting. This is a public health crisis and we cannot afford more delays in confronting it," he said in a written statement.

Myers' group will work to pass "a comprehensive prohibition on flavored e-cigarettes, and we urge the Administration not to back down in the face of the inevitable pressure from Juul and other manufacturers."

"Sen. Boozman supports the move as a way to reduce underage use of e-cigarettes," said his spokesman, Patrick Creamer.

"The quick rise of youth e-cigarette usage is deeply concerning. It's an issue Congressman Womack has talked about to students, as well as the CDC director who visited Northwest Arkansas in July," she said.

The Republican from Rogers is a co-sponsor of the Preventing Online Sales of E-Cigarettes to Children Act, she noted.