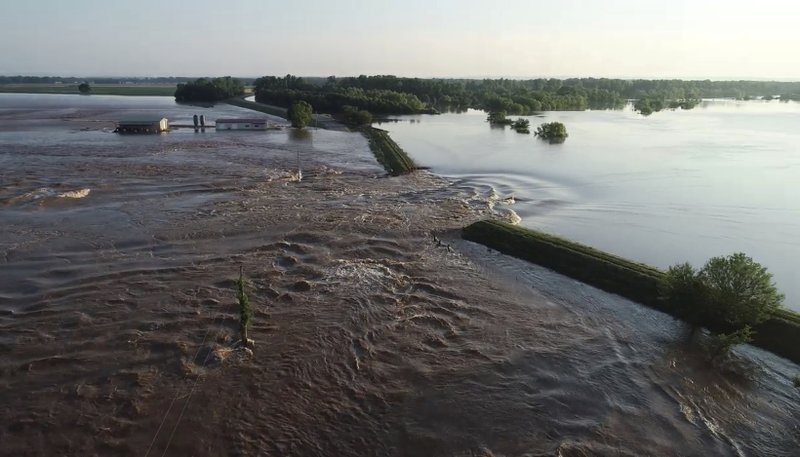 In this aerial image provided by Yell County sheriff's office, water rushes through the levee along Arkansas River in Dardanelle on Friday, May 31, 2019.

The replacement of a section of state highway that washed out when the Arkansas River breached a levee in May will cost nearly $1.1 million.

The $1,088,953.22 bid by Curtis Construction Inc. of Russellville was the lowest of five bids opened Wednesday by the Arkansas Department of Transportation to repair the section of Arkansas 155 in Yell County.

The project was one of 23 for which the department opened low bids totaling $78.4 million. The projects included 17 state jobs worth $77 million.

They were led by a $12.5 million project to widen a section of U.S. 167 in Hampton, the Calhoun County seat, and also included a $5.9 million project to improve the Interstate 40/U.S. 65 interchange in Conway and a $2.8 million job to install a noise barrier on I-40 between Siebenmorgen Road and Mill Street, also in Conway.

The Arkansas 155 project is one of two on which low bids were opened that the department says is related to the heavy rains and flooding that occurred earlier this year. In both cases, the agency will seek reimbursement for up to 75% of the repair costs from the Federal Emergency Management Agency, said Danny Straessle, a department spokesman.

The second flood-related project is a slide repair on a section of Arkansas 377 in Searcy County. The low bid was $1.6 million by Marion County Paving LLC of Summit.

Both flood-related projects are being paid for with state transportation money, Straessle said.

"We have to pay for it with state money and hope we get reimbursed," he said.

It will be several months before a final assessment of the flood-related damage to state highways is known. The department has submitted application to FEMA to qualify for reimbursements. The agency now is developing "detailed damage assessments," which Straessle said usually takes about six months.

The next step would be to submit a list of projects eligible for FEMA aid to the Federal Highway Administration. Once the federal agency's Arkansas division concurs with the list of projects, it will be submitted to Federal Highway Administration headquarters in Washington. Once the funding is appropriated, the department will request reimbursement for the work completed, Straessle said.

The damage is ongoing. The department, for instance, expects to seek reimbursement for the repair of a pier protection cell on the Interstate 30 bridge over the Arkansas River that partially collapsed over the weekend.

"We believe that damage was caused by high, fast-moving water," Straessle said. "Not all of the impacts of the event are always readily noticeable."

The section of Arkansas 155 on the west side of the Holla Bend National Wildlife Refuge has been closed since the river breached the Dardanelle Levee during historic flooding of the river on May 31.

The breach left a 200-foot-long, 40-foot-deep hole where the highway once was at the point of the levee breach.

"It bore the brunt," said Jason Hughey, District 8 engineer for the state Transportation Department and based in Russellville.

The project will also repair another 300-foot section that was washed out. That section was left with a 20-foot hole, Hughey said. In all, the work will cover a 1.5-mile section of the highway.

Most of the quantity cost involves the "compacted embankment" earthen material, which Hughey said will be used to fill in the holes and restore the highway's subgrade.

The quantity of compacted embankment is listed at 32,508 cubic yards, which Hughey said is roughly the equivalent of a 20-foot high mound of material the size of a football field.

Over the subgrade will go 2,269 tons of gravel on which the asphalt will be laid, Hughey said.

"For this type of work, it's some pretty substantial quantities involved," he said.

About 700 vehicles a day travel that section of Arkansas 155, which connects to Arkansas 7 just south of Dardanelle and Arkansas 154 near New Neely, an unincorporated community in Yell County.

"For our citizens who live down in that area, it's made for a longer drive," Jeff Gilkey, Yell County's emergency management director, said Thursday. "They're fortunate enough, though, they can take [Arkansas] 154 to [Arkansas] 7 to get around. It probably adds 15 minutes to their commute every day."

County officials are still working with engineers to develop cost estimates for the actual levee breach. Once they are available, they will apply for funding that Gov. Asa Hutchinson has made available, Gilkey said.

A map showing the section of highway that is washed out.