Board approves Drale to serve two-year term as UALR chancellor 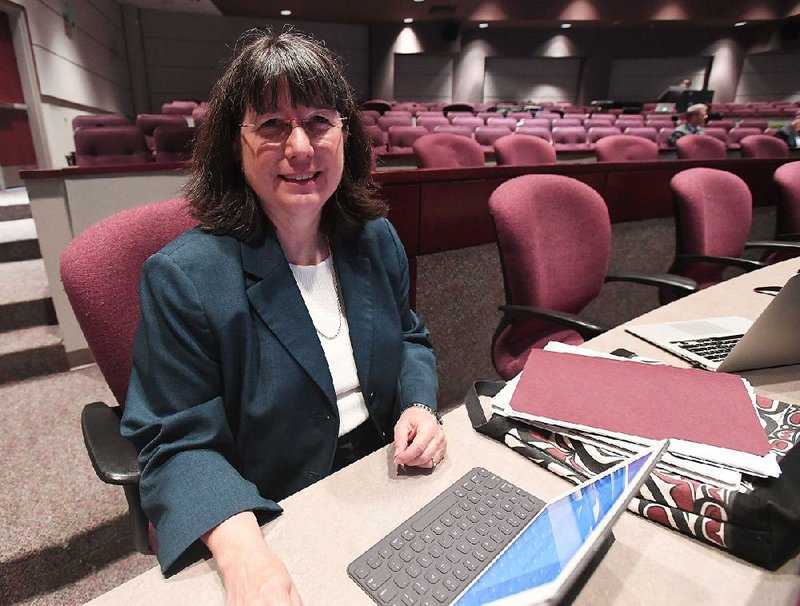 The decision Thursday gives her time to dive into "the really hard work that we have ahead of us," said Drale, 61, a California native turned UALR insider after being at the campus for 13 years.

Enrollment declines this fall are causing the campus to face a larger-than-projected budget shortfall.

Drale takes over from Andrew Rogerson, who in 2017 vowed to turn around years of sliding enrollment but earlier this month resigned suddenly as chancellor after about three years on the job.

Preliminary numbers provided by UALR show a 7% decrease in undergraduate students for the fall semester, to 6,541 from 7,041 a year earlier, and a 16% decline in graduate students, to 1,517 from 1,806. Other large schools in Arkansas have also reported some declines in enrollment this fall.

University of Arkansas System President Donald Bobbitt on Sept. 4 named Drale as acting chancellor. She stepped up from her role as interim executive vice chancellor and provost, a title she had held since October.

The board of trustees, at a meeting in Fayetteville, approved Drale as chancellor at an annual salary to be set at a maximum of $350,000.

On the Little Rock campus, people "are ready to roll up their sleeves and work," Drale said. "They believe in this institution."

Already as chancellor, she said she has heard support from people on campus and also in the community.

Amanda Nolen, an education professor and president of the UALR faculty senate, said faculty members met with Bobbitt to express their desire to have someone from within UALR step up to replace Rogerson, who arrived from Sonoma State University in California.

"The issue that is front and center for all of us is enrollment, both from a recruitment perspective but also from a student retention perspective," Nolen said.

She said faculty members sent a memo to Bobbitt on Aug. 30, the same day Rogerson announced his resignation, to say that an internal candidate would work best to immediately step up as chancellor.

"We don't have the luxury of time for someone external to come in and figure it out," Nolen said.

Nolen said Drale has worked well with faculty members in the past.

"I think what makes her so effective is that you feel like she's being authentic with you," Nolen said.

Asked to describe herself, Drale said her leadership style is well-known to others on campus.

"They'd probably say I'm not a flamboyant person. I'm not a hand-waver, that I'm kind of a quiet leader," Drale said.

Her style is "to be very focused on the priorities, on the strategies and on getting the people together that need to make things happen," Drale said.

Cecilia Orphan, an assistant professor of higher education at the University of Denver, said UALR could be described as a regional comprehensive university.

This category of schools faces different challenges than a "flagship" school like the University of Arkansas, Fayetteville, Orphan said. A school like UA "has multiple revenue streams," which include government grants to do high-level research and money from alumni donors.

"These regional [universities] don't have those kinds of revenue streams they can draw on," Orphan said. She said the general declines in state funding for higher education can hit these schools hard.

Sometimes regional comprehensive universities feel "internal pressure" to "look like the flagship, even though they don't have endowments that are as large, and they don't have as many revenue streams come in," Orphan said.

Nolen said UALR should "leverage our capability of catering to the nontraditional student."

Drale said UALR has lots of students who enroll after time in the military or having children.

When UALR enrolls those students, "We are there to make sure that we offer the best opportunity that we can for them," Drale said.

Drale called it "somewhat unusual to appoint someone as chancellor without a search," and that she expects that "probably before two years are up, we will be looking at how things are going."

But if an appointment is only for a year, "it's really hard to get people behind an initiative that's going to take longer than a year," Drale said. "And so they wanted to make sure that they had somebody that people could get behind, and that they knew that person was going to be there at least a couple of years in that position."

She called it a "possibility" that she would be interested in continuing beyond the two years. Drale said she does not plan to live in the UALR chancellor's residence, with the building to be used for events.

Drale said she is originally from Los Angeles. She earned a doctorate in sociology from the University of California, San Diego, where she also earned her bachelor's degree, in communications, and a master's degree in sociology.

The announcement from the University of Arkansas System stated that Drale will be responsible for finding a new executive vice chancellor and provost.

"Dr. Drale is widely respected on campus and is equipped with the necessary skillset to guide UA Little Rock through the challenges it currently faces and help solidify its unique standing as a comprehensive metropolitan university serving our Capital City and the entire state," Bobbitt said in a statement. 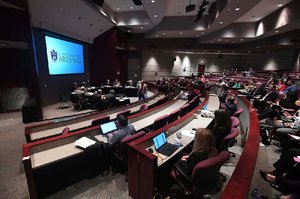 Photo by J.T. Wampler
The University of Arkansas board of trustees holds its meeting Thursday in Fayetteville. More photos are available at arkansasonline.com/913meeting/