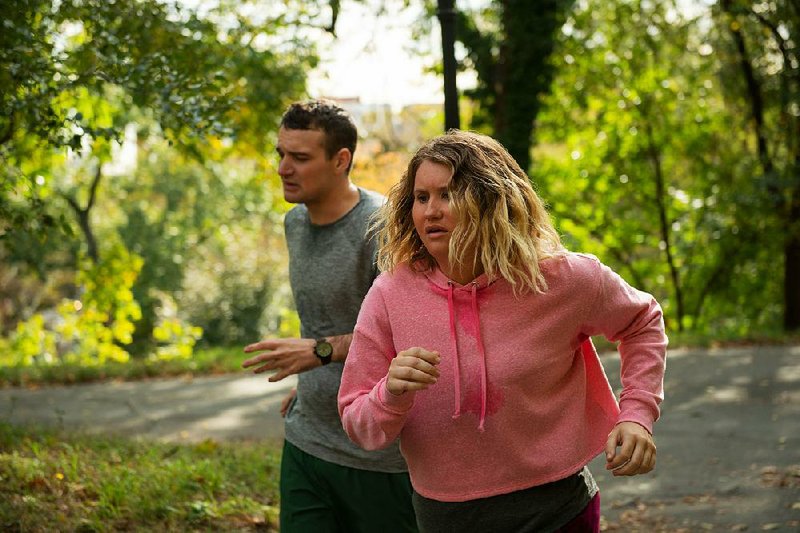 Seth (Micah Stock) and the hard-partying title character (Jillian Bell) run their way to self-actualization in Brittany Runs a Marathon, a comedy that manages to be uplifting and edgy.

Brittany Runs a Marathon won the Audience Award at this year's Sundance Film Festival. It's not hard to understand why. It's an uplifting movie leavened with dark humor from a protagonist who is by turns endearing, funny, obnoxious, dismissive, cruel and ultimately human.

You might not always like Brittany (Jillian Bell), the generously proportioned pushing-30 underachiever who decides to take control of her life, but you'll recognize her.

Rating: R, for language throughout, sexuality, some drug material

Like a lot of independent movies that manage to gain traction in the marketplace, the story behind Brittany Runs a Marathon may be more interesting than what ended up on screen, which is given away by the title.

Paul Downs Colaizzo was inspired to write the film by his roommate and college friend Brittany O'Neill, who took up running in the midst of an existential crisis. Colaizzo, a playwright and theater director with no feature film experience, was impressed and started writing the screenplay in secret, eventually caricaturing the real Brittany (who we assume is neither as acerbic, hard-partying or pathetic as her bottomed-out fictional namesake can be at her worst) and supplying her with a shallow Instagram influencer roommate, a couple of running buddies and the goal of running the New York City Marathon.

In 2013, Tobey Maguire happened to see Colaizzo's off-Broadway play Really Really (his New York theater debut) in a West Village playhouse and liked it. So Maguire and his producing partner Matthew Plouffe reached out to then-27-year-old Colaizzo, who verbally pitched them the movie he was writing about his running roommate.

They agreed to finance the low-budget production. Bell soon came on board as the film's star and a producer, and Colaizzo custom-tailored the script to her. (Since Bell was in the midst of a weight-loss program, Colaizzo made weight loss one of the fictional Brittany's prime motivations.)

Fast forward to this year's Sundance, where the film was the subject of a bidding war, eventually won by Amazon Studios, for $14 million, several times its production budget. Unlike some of its other films, which will appear in a few select theaters before appearing a few weeks later on Amazon's streaming platform, Brittany Runs a Marathon got a traditional theatrical rollout, in part because Amazon decided it played best in a communal atmosphere.

That may be true because watching Brittany Runs a Marathon at home (on a 12.9-inch iPad Pro) proved to be a pleasant enough but not transformative experience. It's pretty much what you might expect it to be based on the poster and trailer, a mildly edgy vehicle that positions Bell as an unconventional, sometimes unlikable but generally accessible vessel for the audience's empathy. We like her, despite -- or maybe because of -- her imperfections.

Describing Brittany Runs a Marathon as feeling like an indie movie version of a Amy Schumer rom-com might be lazy, but feels right.

While the movie offers plenty of signals that the filmmakers believe all bodies are beautiful in their own way and that Brittany is only unkind to others because she's not found a way to like herself, the movie still seems to endorse the idea that a physical transformation can make one's life better -- a proposition that some moviegoers might find dubious, if they think about it.

In some ways, Brittany is reminiscent of a self-help book. Some people think you can run your way to happiness (maybe some people can). But for most of us, no matter what size we are, it's just not that simple.

But if you can get past the premise and some of the more overt situations, you might notice that Colaizzo has a real ear for dialogue, and some of the supporting players -- especially Michaela Watkins (Antiquities) as Catherine, Brittany's least-favorite-neighbor turned running coach -- turn in nuanced performances.

When Brittany visits a Yelp-rated doctor's office with the hope of being supplied Adderall only to be hit with the sobering news that she needs to lose 50 pounds ("I'm broke. I'm fat. My liver's shutting down or something," is how she explains it to Catherine in one of the film's best scenes) the movie shifts for a few moments into a genuinely affecting mode where all the wisecracks are exposed as false bravado.

Still, there are few surprises in the underdog-triumphant script. Third-act difficulties that arise feel obligatory and make the movie seem to drag, even though it comes in at a relatively economic 104 minutes. Bell (who lost 40 pounds during filming, which introduces some continuity problems into the film) does a lot with a character who, by the end of the movie, you might not feel completely comfortable rooting for. 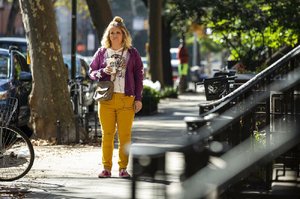 Photo by BRAM_day06 (©jonpack)-0273
Jillian Bell lost 40 pounds during the filming of Brittany Runs a Marathon, a movie which was inspired by a real woman’s decision to straighten out her life.