It Chapter Two cashes in on thin release weekend 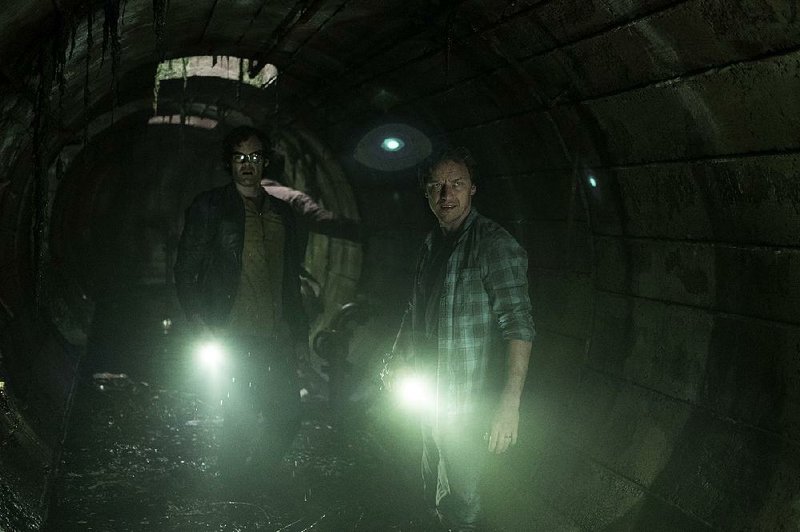 Bill Hader (left) stars as Richie Tozier and James McAvoy as Bill Denbrough in Warner Bros./New Line’s It Chapter Two. The sequel soundly beat all competitors at last weekend’s box office to come in at No. 1 and made about $91 million.

As the lone entertainer at a desolate children's birthday party, It Chapter Two and its killer clown effectively took over movie theaters last weekend, making more money than the rest of the top 10 movies combined, playing on 4,570 screens.

The only major newcomer at the box office, It Chapter Two sold about $91 million in tickets at domestic theaters Friday through Sunday. It picked up an additional $94 million overseas last weekend, according to the studio.

Those figures are a success for Warner Bros., the film's distributor, even if they lag behind the record-breaking opening that the first It had when it debuted to roughly $120 million in North American ticket sales in 2017. They're also a welcome jolt for theaters, where last weekend a small group of holdover movies had been jockeying for fumes.

Jeff Goldstein, who oversees domestic distribution for Warner Bros., called the debut sensational and isn't concerned that Chapter Two didn't hit the heights of the first.

Based on Stephen King's novel, It Chapter Two brings the Losers Club back to Derry 27 years later to take on the demonic clown Pennywise and stars James McAvoy, Jessica Chastain and Bill Hader as a few of the adult losers. The sequel cost around $79.5 million to make. Reviews were a little more mixed than for the first -- 86% versus 64% on Rotten Tomatoes -- but audiences were consistent. Both films got a B+ CinemaScore.

"[Director] Andy Muschietti does an incredible job of scaring the stuffing out of audiences," Goldstein said. "I think our team, starting with New Line in making this and our marketing team in bringing it to audiences around the globe, have hit the mark right on. They nailed it."

Comscore senior media analyst Paul Dergarabedian noted that, unlike most horror films which tend drop off significantly after opening weekend, It Chapter Two, as with its predecessor and some of the recent high-quality horror films could have incredibly long playability.

After a down summer for the industry as a whole and a year that is still running 6% down, It Chapter Two is a promising start to the fall movie season, which runs from the day after Labor Day weekend through November.

"It's really important to have a movie to get the momentum going," Dergarabedian said.

The rest of the top 10 was populated by holdovers: Angel Has Fallen took a distant second with $6 million and Good Boys placed third with $5.4 million. In limited release, the documentary Linda Ronstadt: The Sound of My Voice performed well in its first weekend, grossing $115,500 from seven locations.

Fast & Furious Presents: Hobbs & Shaw continued to dominate theaters in China, the second-largest box office market. The Universal Pictures action spinoff topped the charts there with $26.3 million last weekend for a total of $164.9 million so far from China, according to consulting firm Artisan Gateway.

In second place was Ne Zha, a Chinese animated film that has proved to be a runaway success in the country. The film, about a young boy with special powers who finds himself an outcast, has collected $664.5 million in China, including $16 million last weekend, making it China's highest-grossing animated film ever.

Ne Zha debuted in U.S. Imax theaters during Labor Day weekend, earning a solid $1.49 million from 66 theaters through Monday. The movie is distributed in the U.S. by Well Go USA Inc.