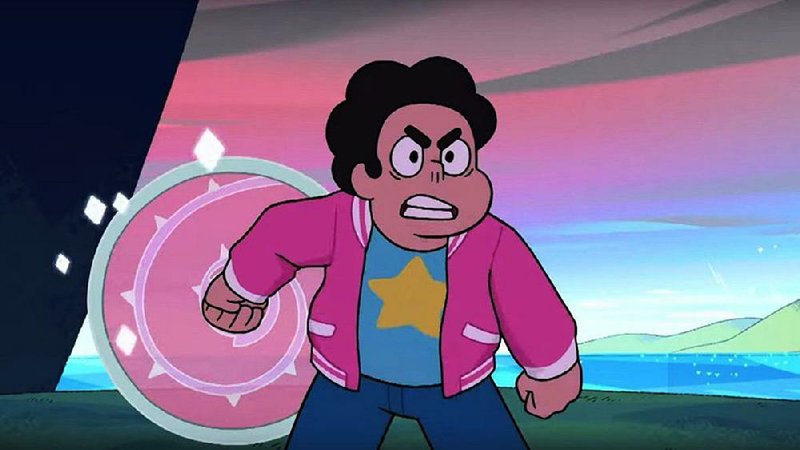 Steven Quartz Universe (voiced by Zach Callison) is the only known hybrid of a human and a “Gem” — an extraterrestrial species of “magical” human — and the star of his own movie on Cartoon Network.

Some years ago when I was a stubborn fool, I thought there was no way modern cartoons could rival '90s cartoons of my youth. And although Hey Arnold! is still my favorite cartoon of all time, I'm glad I've wisened up to see contemporary cartoons are capable of telling such deep stories with evolving character arcs and colorful art while addressing bigger issues in culture.

These days, I'm loving the wide variety of cartoons studios are creating across the world, from Miraculous Ladybug to Carmen Sandiego. I can't get enough of The Dragon Prince and She-Ra and the Princesses of Power. And then there's Steven Universe, a flawless gem in the world of modern cartoons.

My wife introduced me to this show back in 2014, and at first, I thought I wouldn't like it. It was just a little too kiddish for me, I thought. But boy was I wrong. This show tackles so many pertinent issues across its 160 episodes, love, teenage development, acceptance, trauma, processing emotions, inner peace and so much more. It's such a heavy show that accomplishes so much in its 11-minute episode format.

I can't tell you how many times I finished an episode crying or just stunned in silence at the mental state the writers left our beloved characters in. The animation is colorful and just downright beautiful at times, especially when gems fuse together to create new forms.

For those who have yet to find this dazzling cartoon, the story follows a teen boy named Steven Universe who lives with three Crystal Gems. The gems are sentient rock aliens named after their stones. The main characters are Pearl, Amethyst and Garnet (with Amethyst being my personal favorite).

Throughout the series, Steven Universe and the Crystal Gems fight to protect the Earth from more malevolent gems who want to destroy it. And along the way, Steven develops as such a rich character who is forced to grow up dealing with the mistakes of his mother, Pink Diamond, and all the enemies she's created across the cosmos. Steven has to grow up fast and use his own crystal powers inherited from his mother to clean up her messes.

The show has been on for five seasons, and last week, Cartoon Network debuted Steven Universe: The Movie. It's an instant masterpiece. It takes the deep developments of each character established over 160 episodes and pushes them further forward still. It's absolutely brilliant directing from Rebecca Sugar, Kat Morris and Joe Johnston.

Normally, I'd write about the animation first in a review for an animated movie, but I absolutely have to rave about the soundtrack for this musical. Steven Universe has always had fantastic music throughout the show, from classics like "Stronger than You" and "Here Comes A Thought."

The movie brought in Broadway talent like Sarah Stiles (who voiced the antagonist) and has such moving songs like "Who We Are" and "Other Friends," that I'm still listening to as I write this article. Warner Brothers put the soundtrack on YouTube, and if you aren't sure about the movie yet, go check out the music, see if it doesn't make you want to watch this movie.

Steven Universe's voice actor, Zach Callison, and Garnet's voice actor, Estelle, are the real standouts while singing in this movie. But the brilliant thing about Rebecca Sugar is she's able to get astounding musical performances from literally EVERYONE in this show, even if they aren't singers by trade. And when characters aren't singing, the movie has the series' trademark video-game-like background music, some soft techno beats mixed with light keyboard tones. I'm not exaggerating when I say in a perfect movie, the greatest piece was the music. There's something in it for everyone.

One of the reasons I love Steven Universe so much is the wide variety of characters who each have such rich stories to tell. Pearl has to deal with the harsh fact that the love of her life left her for a human man named Greg, a bit of a doofus. Amethyst has to come to grips with being the weakest gem whose growth was stunted. And Steven is constantly living in his mother's shadow and all the pressures that come with being Pink Diamond's son. Even Pink Diamond herself starts off as this graceful and sorrowful figure, but the more we learn, we see just how flawed and scornful she was, leading to conflicts.

Thanks to this new villain, these main characters all get a new chance to redefine themselves. Steven has to work to regain the friends that have stood by his side, fought together through all the physical and emotional trauma this series has thrown at them. And there's a sad but beautiful quality that comes along with this story.

One of the great things about Steven is he's often not fighting to simply defeat his antagonist. He's trying to understand their pain, help them through it and win them over in the process. As the opponents and their pain grow through the series, so Steven has to grow to help them. It's what makes his character arc so fascinating. He is constantly changing and reacting to the needs of those around him. You will not meet a kinder, more gentle cartoon soul than Steven Universe.

The animation for this movie was on par with everything else I'd seen in the series, but it's difficult for me to really be further impressed after the fusion of Obsidian in The Battle of Heart and Mind or when Steven reunited with his gem in the season five finale. Those are peaks I think Rebecca Sugar's animation team is going to have trouble topping. The movie's animation is as graceful and magnificent as it needs to be, and in the end, I think that's just fine.

It's difficult for me to put into words all the emotions this movie stirred in me. Steven Universe is just this perfect icon of music, love, acceptance, grace, art, evolution of soul and more. I think anyone who watches the show will have a hard time not becoming a better person. That's just how inspiring the show is. It seems funny to say that a cartoon inspires me to be a better person, but that's just how far Steven will go in his quest to heal those are hurting and misunderstood.

This movie takes all the great moments a 160-episode series has created in 11-minute chunks and mixes them all together reaching new heights in a full-length film. The good thing about this movie is newcomers learn everything they need about the show in the first five minutes, and they'll still love this film as much as the diehard fans that have their own cheeseburger backpack at home.

If this was the end of the series, I'd be 100% satisfied with that, but I said the same thing after season five. Rebecca Sugar said there's more story to tell, and I trust her team. Her crew simply cannot disappoint with this series. If she says there's more, I'm more than happy to wait for them to show it. And the only thing Cartoon Network executives need to say to her when she pitches season six is, "Yes, ma'am."