The Star!-maker machinery A Star! is scorned 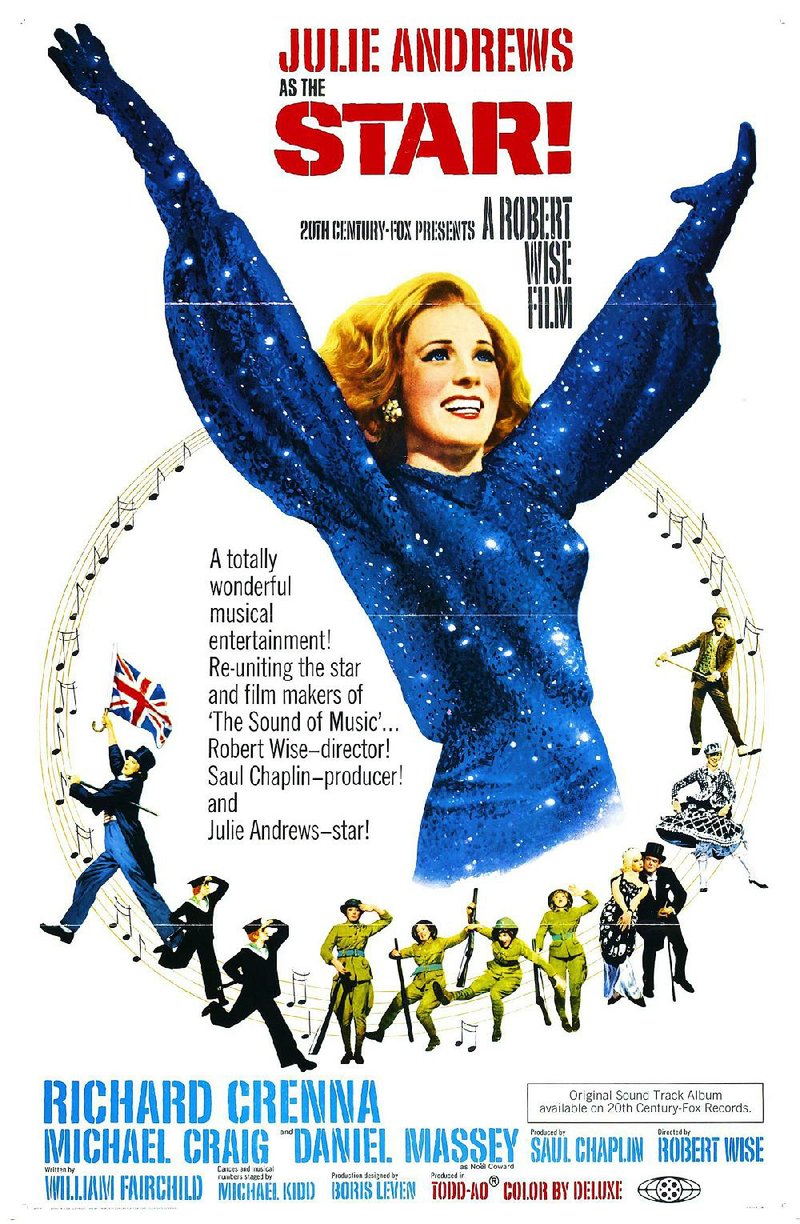 Julie Andrews was on a roll when she made Star!, as was her director, Robert Wise.

She had just seen box-office success with Thoroughly Modern Millie in 1967, from Universal. And he had just produced and directed The Sand Pebbles, for 20th Century Fox, which had been a critical success. But that was all over once Star! was released.

According to IMDb: 20th Century Fox "kept trying to duplicate the success of The Sound of Music by producing three expensive, large-scale musicals over three years. Doctor Dolittle, Star! and Hello, Dolly! were all released amid massive publicity. All lost huge amounts of money. Several top studio executives lost their jobs, and the studio was in such dire straits that it only produced one movie in 1970. The studio finally recouped its losses in 1973, when The Sound of Music was re-released to theaters."

Part of the reason for the film's failure is the huge budget ($14 million, which is about $103 million today) was never recouped. And the film runs almost three hours. Also, other than Daniel Massey as Noël Coward, her male co-stars were less than adequate and not nearly the star power Andrews needed to make the film a success. John Collin, Anthony Eisley, Michael Craig, Robert Reed and Richard Crenna, although serviceable actors, were not in the same league. As far as portraying Lawrence, Andrews is up to the task in one of her finest musical performances. (She sings 15(!) songs.)

Also from IMDb: "When business didn't meet expectations, the studio suggested some shortening, and Robert Wise offered about 20 minutes of cuts that were literally scissored out of the prints while the film played to initial reserved-seat audiences. The studio also tried revamping the ads to appeal to a younger audience, even including a shot of Julie posing with a motorcycle that was just an on-location joke and not a scene in the film. Another idea was to make up a couple print ads that tried to make the movie look like a soap opera, adding Loves of a ... to the title. The Loves of a Star! ads were only tested briefly in a few papers and never used widely. This prompted a politely shocked letter from Robert Wise to the studio, who sheepishly admitted it was a desperate attempt that failed. That title was never put on the actual film. In the spring of 1969, the studio withdrew the film from release entirely and decided on a drastic edit and total new identity. After removing many of the musical numbers and preparing new ads that deliberately made the picture look like The Sound of Music (1965), a two-hour version was released under the title Those Were the Happy Times. At his own request, The credit 'A Robert Wise Film' is not present on this version. The short version did no business."

Julie Andrews' contract for The Sound of Music required her to do a second film for 20th Century Fox. And Star! was that film.

The story is a fictionalized bio-pic of English music hall star Gertrude Lawrence, who eventually made a few films in England and a couple in the United States (1950's The Glass Menagerie was likely her best performance). She also originated the role of Anna Leonowens on Broadway with Yul Brynner in The King and I. You would think her life was worth a film. But this isn't it. Too many facts were changed to fit the screenplay.

Also from IMDb: "After this musical flopped at the box office ... William Reynolds, the film's original editor, was hired to cut down the film based on instructions from [Fox president] Richard D. Zanuck. ... By the time it debuted on American television, the original title was restored, but the picture was still cut. At almost the same time, it debuted on TV in England, but in the full original version, missing only the overture and entr'acte."

And lastly from IMDb: "The origins of this project date to 1955, as a musical/drama vehicle produced by Warner Brothers for Judy Garland, and as a follow-up to her triumph in A Star Is Born (1954). After Garland lost the Academy Award for Best Actress that year, in addition to the hatred Jack L. Warner had working with Garland and Sidney Luft (the film's producer and Garland's third husband) during the film's production, all future projects between Transcona Productions (the production company set up by Garland and Luft) were abandoned and her three-picture contract canceled."

The filmmakers forgot my motto: less is more.

Print Headline: The Star!-maker machinery A Star! is scorned