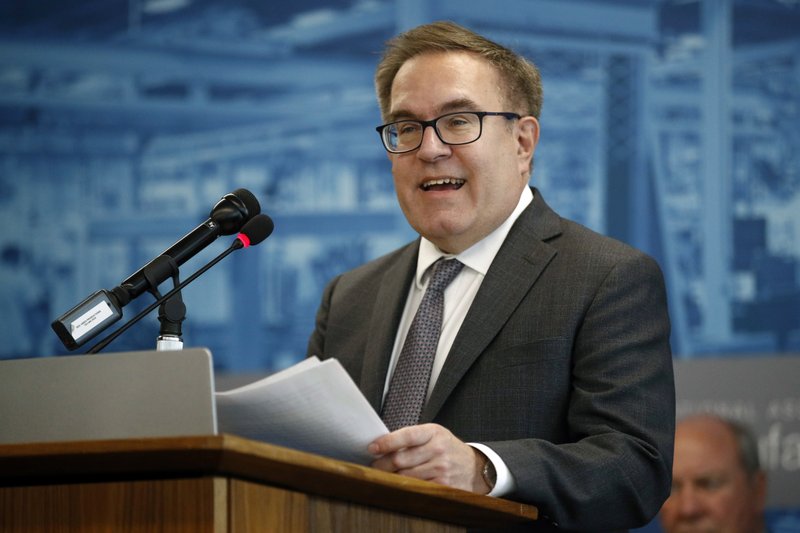 Environmental Protection Agency Administrator Andrew Wheeler speaks at a news conference to announce plans to revoke the Waters of the United States rule, an Obama-era regulation that provided federal protection to many U.S. wetlands and streams, Thursday, Sept. 12, 2019, in Washington.

The new standard will go into effect 60 days after being published in the Federal Register.

Under federal law, the Environmental Protection Agency is empowered to safeguard "navigable waters," which encompass "the waters of the United States, including the territorial seas."

The Waters of the United States rule, promulgated in 2015, further defined which waters could be regulated pursuant to the Clean Water Act.

Once the 2015 rule has been repealed, states will be guided by definitions that date to the 1980s.

The rule, which was sometimes referred to as the Clean Water Rule, had already taken effect in 22 states and the District of Columbia, according to EPA Administrator Andrew Wheeler.

Twenty-eight states, including Arkansas, were still operating under the previous rule, Wheeler said.

"This patchwork approach does no good for the country and it's not a reasoned way to regulate or address water quality issues," he told reporters Wednesday.

After the repeal is complete, the administration will work to secure a new Waters of the United States rule that is "easy to understand by any property owner," Wheeler said. "Our ultimate goal is that the definition should be so easy to understand that a property owner can stand on his or her property and be able to tell for themselves whether they have a federal waterway without having to consult an outside consultant or attorney."

The 2015 rule had been praised by environmental activists, who said it would protect public health, prevent pollution and slow the destruction of wetlands.

It faced opposition from agriculture and industry groups, who portrayed it as a vast power grab by the federal government.

They argued that the rule would cover not only navigable waters but also, potentially, minor streams, ponds and puddles.

One month after taking office, Trump ordered the EPA and Army officials to review the definition, calling it "one of the worst examples of federal regulation."

Legal challenges had prevented implementation in much of the country.

Arkansas Attorney General Leslie Rutledge, who had opposed the rule since its inception, welcomed the latest development.

"Today's announcement to restore the pre-2015 waters of the United States rule gives regulatory stability for vital industries in the state," she said in a written statement. "Despite the previous administration's unlawful power grab, this step will provide certainty and flexibility for states to determine the management of our precious water resources."

Scott Yaich, a board member with Friends of the North Fork and White Rivers in Mountain Home, called the decision "detrimental."

"Today's action is certainly a setback for [those] trying to protect the state and the nation's water quality and wetland habitats," he said.

The Washington-based environmental advocacy group had fought to keep the standards in place.

"The Clean Water Rule represented solid science and smart public policy. Where it has been enforced, it has protected important waterways and wetlands, providing certainty to all stakeholders," he said in a written statement. "This unsubstantiated action is illegal and will certainly be challenged in court."

The debate over the definition of "waters of the United States" is a long one.

In one instance, the EPA pursued criminal and civil suits against a Michigan man, John Rapanos, who had filled in wetlands in 1989 without obtaining a government permit.

Rapanos' property didn't border any ponds or streams; the nearest navigable water, in the traditional sense of the word, was more than 10 miles away.

He sued, eventually taking his case to the U.S. Supreme Court.

In 2006, the court sided with Rapanos. The plurality opinion, written by Justice Antonin Scalia, stated that "the waters of the United States" refer to "relatively permanent, standing or continuously flowing bodies of water," such as rivers, streams and lakes.

Wetlands could be subject to EPA authority if they are adjacent to and possess a "continuous surface connection" to these waters, he added.

Justice Anthony Kennedy, who concurred with the outcome, didn't require such a connection. A "significant nexus" between the wetlands and waters of the U.S. would be sufficient, he said.

During the 2016 presidential campaign, candidate Trump had promised to roll back the standards.

"President Trump is making good on his promise to reduce burdensome regulations to free our producers to do what they do best -- feed, fuel, and clothe this nation and the world," he said in a written statement.

"No regulation is perfect, and no rule can accommodate every concern, but the 2015 rule was especially egregious," Veach said in a written statement. "We are relieved to put it behind us. We are now working to ensure a fair and reasonable substitute that protects our water and our ability to work and care for the land."

In an interview, U.S. Sen. Tom Cotton, R-Ark., predicted the new rule would be "more sensibly balanced between conservation, on the one hand, and development."

"We want to protect our waterways, which is the source of so much enjoyment and satisfaction and commerce in our state and all across the country, but at the same time we want to protect private property rights and development as well," he said. "Rivers like the Buffalo National River or the Arkansas River [or] the White River are waterways of the United States, clearly, under what our founders meant in the Constitution. Puddles in backyards? Not so much."