How one couple remodeled their house for one-level living 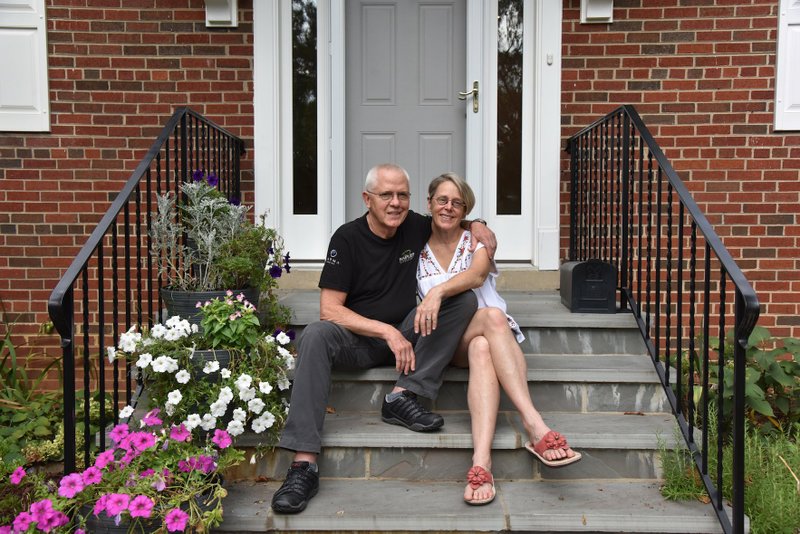 Foster Lott and his wife, Katharine Alter remodeled the main level of the Maryland home for one-floor living so it would be possible to stay in the house as they aged. Washington Post photo by Marvin Joseph

Soon after Foster Lott and his wife, Dr. Katharine Alter, bought their two-story, 1945 house, they began talking about ways to improve it, and saving up to do so.

Sixteen years went by and they were still talking about it. But in 2016, Lott's hip was giving him an increasingly hard time — he's in his 70s and she's in her 60s — and they realized it was time to actually do the remodeling.

By then they had added an important priority to their plans: They would not only give the house an aesthetic upgrade but also adapt the main level for one-floor living so it would be possible to stay in the house as they aged and faced mobility problems.

The couple say they loved their neighborhood in University Park, Md. But their lackluster, 2,200-square-foot Cape Cod? Not so much. The 1,678-square-foot first floor, in particular, cried for change. It was cramped, Lott says, with "lots of little rooms and partitions."

The kitchen and first-floor bathroom were small, dingy and dated. The small screened-in back porch offered tranquil views but was unsightly, dilapidated and only usable weather permitting. In front, a steep yard and five entry stairs were forbidding. 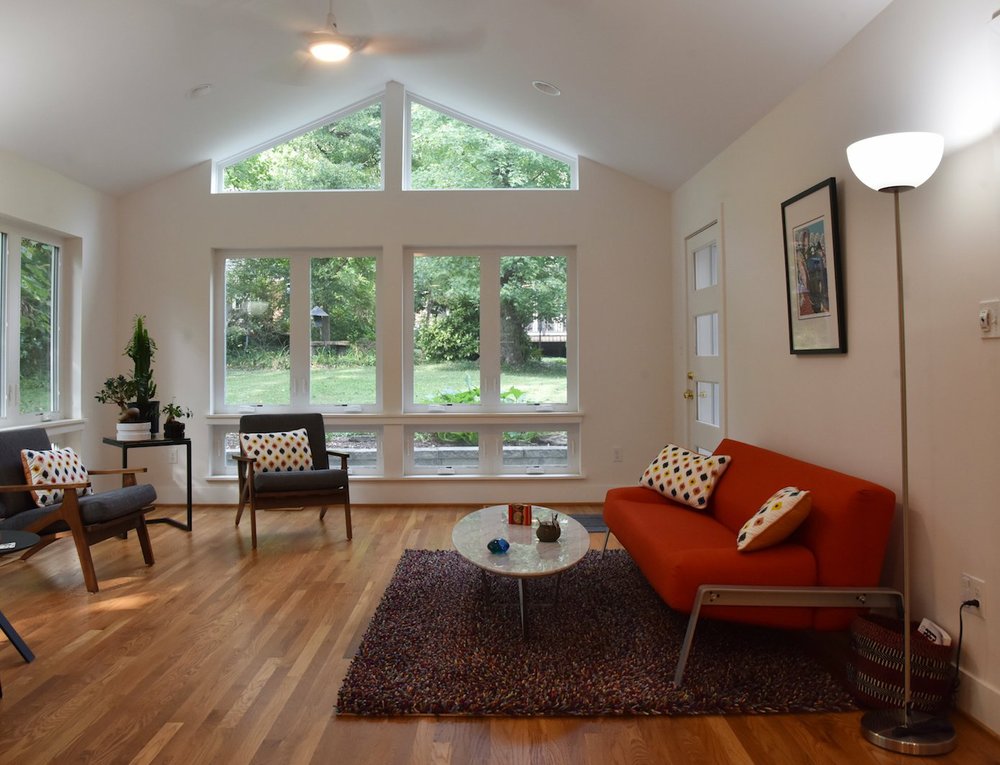 Alter had a head start in evaluating ways to make the house safe and functional for people with mobility or other challenges. As a physician specializing in rehabilitation for people with physical disabilities, she says, "I understand the needs."

One of her longtime patients is the son of remodeler Russ Glickman. His firm in Rockville, Md., Glickman Design Build, specializes in accessibility, aging in place and universal design — an approach that incorporates safety and convenience features that blend into attractive home designs. Alter and Lott knew of many such projects that Glickman had done over the years and turned to him to handle their remodeling job.

A home that is comfortable and safe for aging in place generally has a number of features, including the option for one-story living; an open plan with wide passageways and doorways; rooms and showers large enough for wheelchairs to navigate; at least one stepless entry; and low thresholds.

Other features include: smooth floors; good lighting; storage and work surfaces that are easy to see and reach; easy-grip handles; grab bars; comfort-height commodes; easy-to-operate windows; HVAC and other equipment; low-maintenance materials and systems; appliances that are safe and easy to use; and stairs with handrails, deep treads and shallow risers.

Lott and Alter were looking to adapt their house using the universal design method, but in a modified way, selecting the accessibility features most important to them and forgoing others because they expect one of them to need fewer accommodations. They wanted an open, more contemporary living area that incorporated a modernized kitchen and a sunroom. They planned to convert a small first-floor room and bath into a master suite, add a stepless entry and invest in other needed improvements, such as new roofing.

Glickman designed a house that delivered on all their priorities. "We presented a proposed 'base plan' and overall price which included things considered 'must-haves,' along with a separate menu list of options from which they could pick and choose, with individual prices attached," he says. "That was an easy way for the clients to choose what was most important for them based on their desired features and related costs."

They chose many of them but opted against building a larger front porch and did not replace all the hardwood floors. They did not install radiant floor heating or a separate bidet in the bathroom. They also decided not to paint rooms elsewhere in the house and did not add a second floor loft over the expanded sunroom.

The project began in April 2016 and was completed in early 2017. The first-floor portion of the job, including major structural work and numerous custom and premium products, came to about $261,000.

By removing three load-bearing walls and replacing them with overhead beams to support the second story, Glickman dramatically transformed the main floor. One wall ran across part of the back of the house. Removing that wall and the shabby screened-in porch made way for a sparkling sunroom that absorbs the porch area and adds 200 square feet. The spacious room, with a cathedral ceiling, recessed lighting, and large insulated windows across the walls and up to the ceiling peak, is a bright retreat that embraces backyard views and can be enjoyed year-round.

The sunroom extension also solved the puzzle of where to put a step-free entry. The front yard was too steep to accommodate an accessible ramp, so Glickman looked behind the house instead. He wrapped a paved walkway from the driveway and garage to a no-step, flat-threshold sunroom doorway. A slight pitch at the entry channels rainwater into a linear drain, obviating the need for deep eaves that would block light. 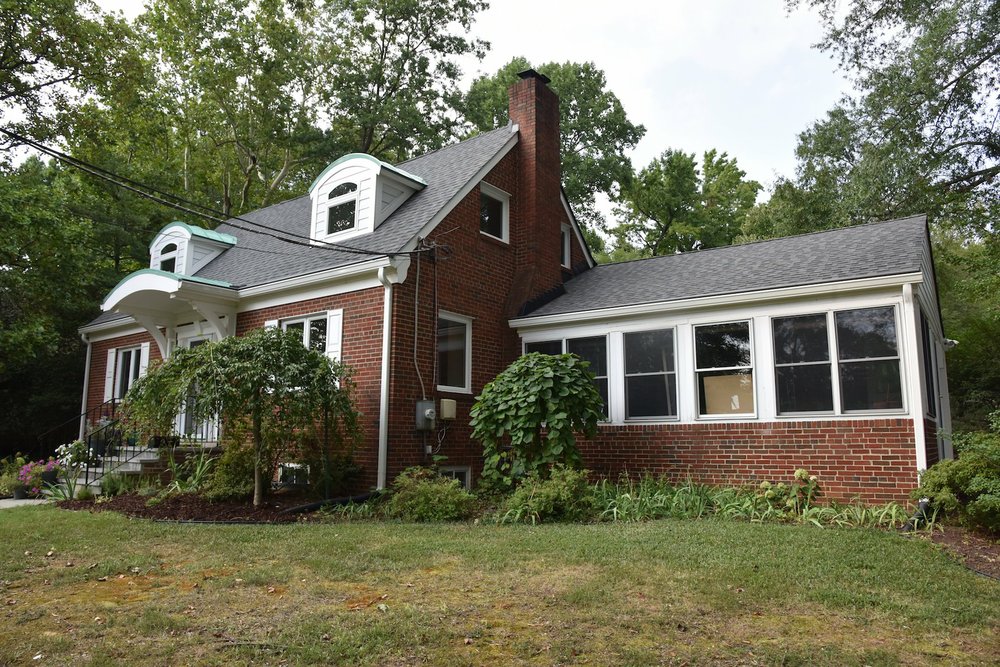 The sunroom forms one end of a broad, L-shaped open space that bends around a bedroom and bathroom to fill most of the main floor. Glickman removed two interior walls by the central staircase and hall to unlock this open plan.

Taking out one of the interior walls eliminated the hall — which represents an accessibility adaptation in itself — and merged the hall space into the living room, for a gain of four feet in room width. Taking out the stair wall enhanced the airy and open kitchen/eating space that occupies the old kitchen and dining room area. Interior designer Pari Darvish specified the sleek stainless-steel and cable custom handrails that flank the stairs.

In another stroke of creativity, Glickman reconfigured the first-floor bathroom. Originally a tiny rectangular space notched into the bedroom, it was too small to be made wheelchair accessible. And guests had to walk into the rear of the house to use it.

Now the bathroom is a spacious 77-square-foot trapezoid that angles across the center of the first floor. It has two entries -- a narrow one occupying an available opening from a living room corner and a wider, accessible one from the bedroom. A bathroom wall cuts a stylish swath across the living room, giving the bathroom more of the space that was gained by eliminating the hall. 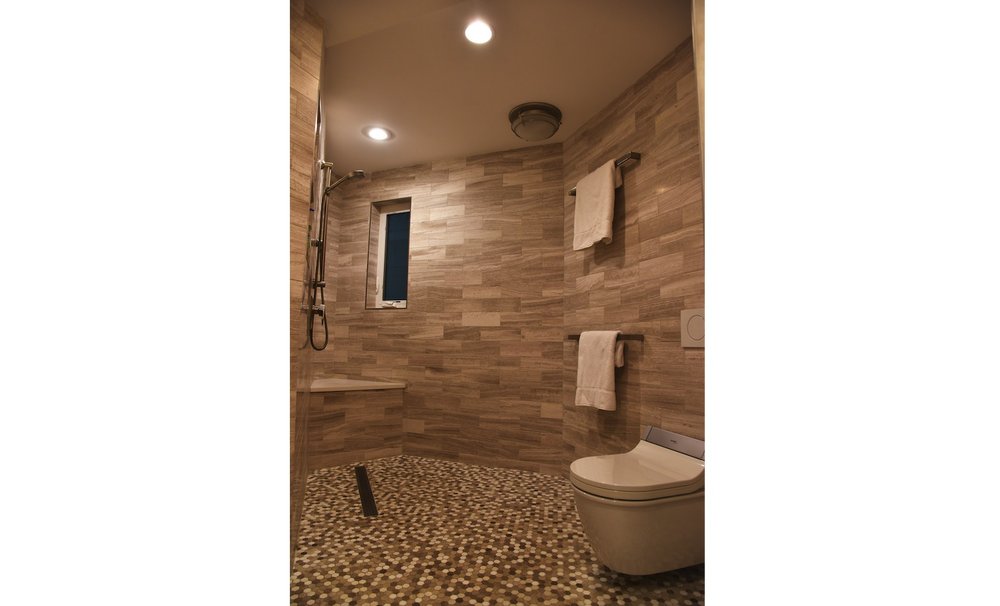 The Washington Post/MARVIN JOSEPH The shower area was remodeled with wheelchair use in mind.

The bathroom is itself an open space. It is a doorless wet room that includes a roomy shower area with a built-in bench and adjustable, handheld shower head. A slim, slightly indented linear drain channels the water away. The adjacent toilet/bidet is wall-mounted at a comfortable seating height.

The sink and counter are wall-mounted as well, and the custom vanity underneath can be removed if needed to make room for a seated user to pull up close. For now, Lott and Alter wanted the vanity. They also chose not to install grab bars alongside the toilet, though blocking in the walls will allow easy installation later.

Darvish recommended a blend of bathroom tiles that are practical and attractive. The entire room is tiled in warm tones. "I love the colors," Lott says. Large, 4-by-12-inch tiles streak across the walls. Complementary mosaic floor tiles are small, one-inch hexagons. The honeycomb of grout lines around them makes the floor less slippery. The tile is easy to maintain and, because the toilet has no pedestal, cleaning the floor underneath is simple.

Lott and Alter chose a clean, contemporary aesthetic for the living area, pairing simple, white shelving and cabinets with stainless-steel accents. Smooth, oak flooring runs throughout the space; existing and new flooring was stained to mesh seamlessly. The couple chose solid fir four-panel interior doors. The custom fir sunroom door has glass panels to coordinate. The homeowners kept the old doorknobs, because they like the look. If they need easy-grip lever handles later, they can make the switch.

The 13-by-12-foot kitchen opens widely to the sunroom for smooth access. A peninsula adds counter and storage space on the kitchen side. On the other side, it forms an eating bar and defines the dining area of the open plan. The counter tops are soapstone, a durable, easy-care material. Most of the kitchen cabinets and drawers are below the counter and easy to reach. Roll-out shelving and full-extension drawers bring all contents into view. Linear stainless-steel pulls on cabinets and drawers are easy to grasp. A pantry closet — with shelves inside the door as well as along walls — keeps supplies handy. 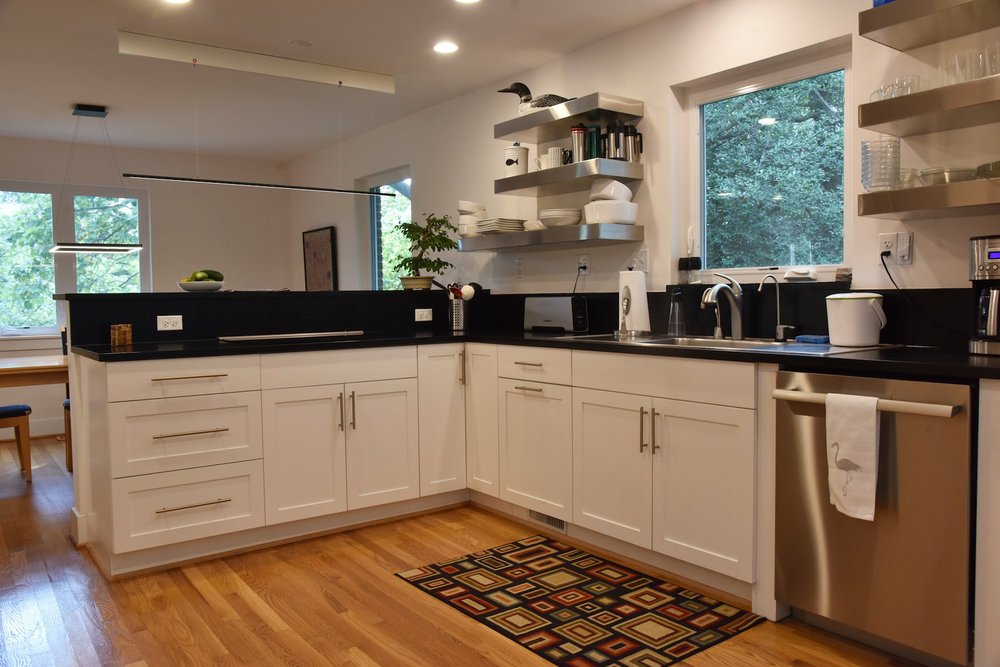 The kitchen and dining area of the remodeled home of Foster Lott and his wife, Katharine Alter of University Park, Maryland. Washington Post photo by Marvin Joseph

The easy-to-clean stainless-steel appliances include a dishwasher, a stacked oven and a microwave raised several inches above floor level. The height allows for convenient access and transfer of food from oven to counter.

The refrigerator is recessed into the wall, which maximizes clear floor space. The cooktop is an induction unit, so it is not hot to the touch. Controls for the cooktop vent are in front and reachable from a seated position.

To harmonize with the appliances and stair rails, Darvish designed stainless-steel shelving for the walls next to the kitchen window. These open shelves are stunning to look at and keep items visible. Because they would be hard to reach from a wheelchair, though, they are one of the aesthetic choices that Lott and Alter made based on one person being less physically limited.

Glickman's crew installed more of the base cabinets along the adjacent sunroom wall and built display shelving over them. The design adds storage, bridges the transition to the sunroom and conserves open floor area.

Alter has two favorite features of the remodeling job. "I love the soapstone countertop in the kitchen," she says, "and the sunroom design, which re-creates the feel of a back porch and opens up the sunroom, kitchen and dining room to the back garden."

Lott is especially fond of two devices added to the house. One is the mount for the flat-panel television over the living room fireplace. To lower the TV for viewing, he uses a low-force mount mechanism; a red light on the handle illuminates if the TV is getting too hot, signaling Lott to move it up again.

Lott's other favorite? A central vacuum system with retractable hoses in each room. As the spouse charged with floor cleaning, he says he's delighted that there's no need to drag hoses around. 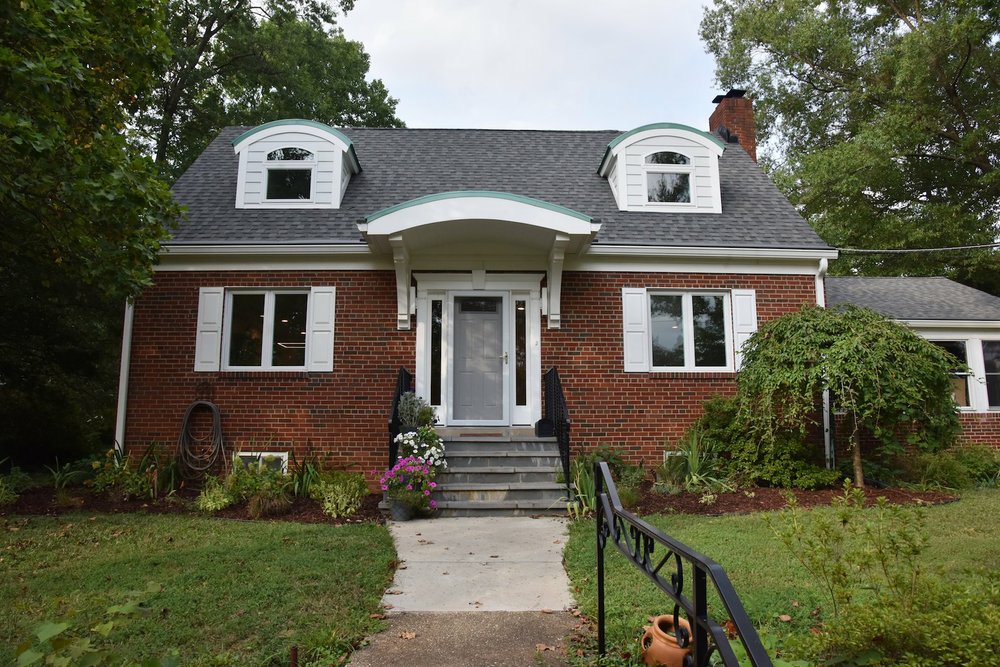 Glickman spruced up the front of the house with an entry portico featuring a curved metallic overhang. New arches over the second-floor dormers match the portico.

From the street, the house still resembles the other Cape Cods in the neighborhood.

"When you walk in, you get the wow factor," highlighted by views through the house to the back window, says Glickman team member Tim Birsin.

"Aesthetically and functionally, the open floor plan is a big improvement," Lott says. "It has spoiled me. I would never want to go back to the way the house was."