Bryant explodes in rout of West 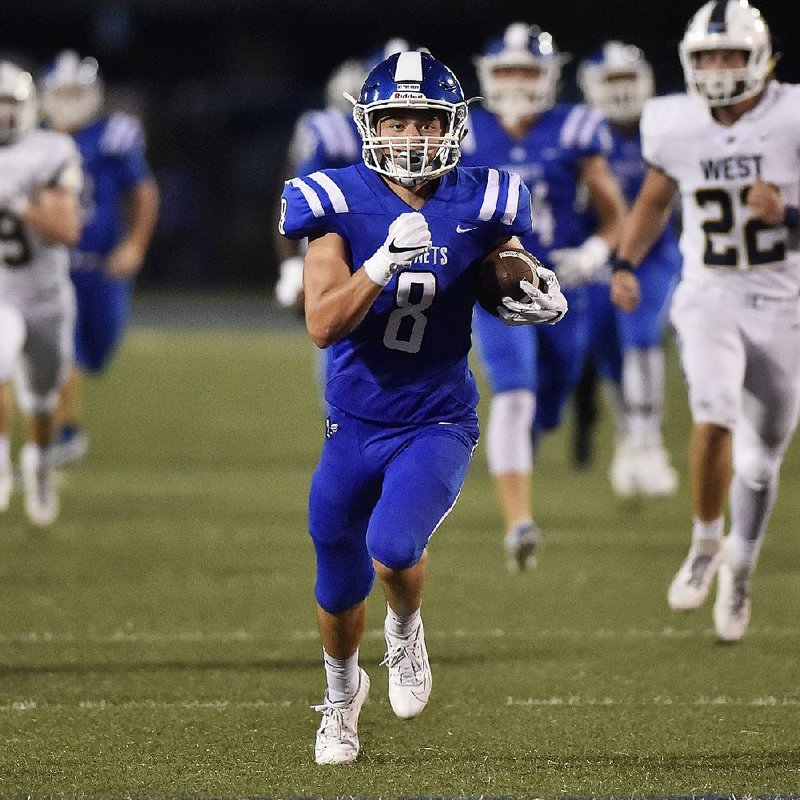 BRYANT -- Bentonville West Coach Bryan Pratt wasn't of the mind to make excuses after losing 38-0 to top-ranked Bryant, the defending Class 7A champion.

Pratt could have gone on about the bus ride of 4 hours, 15 minutes from Northwest Arkansas, a day that started at 10:45 Friday morning.

But none of that really mattered, Pratt said.

Bryant, playing with the poise and physicality of a defending champion, led 35-0 at halftime, and the second half was played with a running clock in accordance to the Arkansas Activities Association sportsmanship rule.

"They're a legit No. 1 team," Pratt said of Bryant. "Right now, they're the best team we've played in a long time. They can just do it all. They can run it, they can throw it, they can play great defense. They really put you in tough situations."

Bryant, which had not played since its 42-14 victory over Benton in the Salt Bowl two weeks before, marched up and down the field against Bentonville West (1-2), totaling 400 yards of offense in the first half.

He connected on screen passes, crossing patterns over the middle and sideline routes, picking apart the Bentonville West secondary from midway through the first quarter until just before halftime.

Ledbetter ran for a 1-yard touchdown on Bryant's first possession, then connected on a 39-yard wheel-route play to River Gregory to make it 13-0 before the first quarter was over.

A 61-yard touchdown pass to Jake Meaders made it 21-0 early in the second quarter, and a 62-yard screen pass to Tre'vun Herron moved the ball to the 2 a few minutes later.

Ledbetter found Meaders for a 6-yard slant on fourth down three plays later to give Bryant a 27-0 lead with 4:39 to go in the first half.

Bryant ended the first half by going 88 yards in 9 plays, with Ahmed Adams (9-63 rushing) running 6 yards for the score and then running in a two-point conversion.

Bryant Coach Buck James said he was pleased with the first half, especially considering the Hornets had not played in two weeks so early in the season.

"I was worried, I'll be honest with you," James said, noting that the Hornets did not practice well the week after the Salt Bowl. "I thought we had a good one this week. I feel good with where we're at. We got a lot to clean up. We've got a chance to have a good football team if we just keep getting better."

James said it was good to have a running clock in the second half so he could give the second-team players experience against a good team.

"We just got on them fast," James said. "I thought our defense did a heck of a job. They couldn't do nothing. We seemed to be able to beat them to their spots. We swarmed the ball. For that, I feel good. You got to be able to play good defense."

James said he does not mind being the team everybody is shooting to beat.

"I like having a target on our back," he said. "That means we're supposed to be pretty good. We've got to be physical. We have to be the team that works their tail off. We're not just fabulous athletes. We're just guys that play the game of football hard."

For Bentonville West, which was coming off a 37-13 victory over Fort Smith Southside, Friday's outcome was a humbler.

"I don't know whether we were thinking we were better than we are or what," Pratt said, "but we got a rude awakening tonight. I think I'm more disappointed in just the offense. We're known for it. We couldn't get a first down."