Boating with Bogie and Bacall 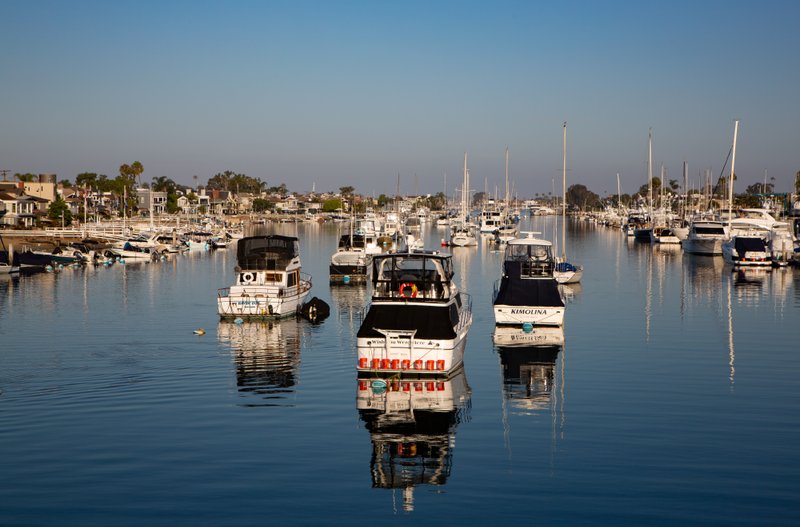 Humphrey Bogart and his friends loved California's Newport Beach, and from the water, it is still easy to understand why. (Photo by Beth Coller via The New York Times)

Visitors to Newport Beach today might know the coastal Southern California city from The Real Housewives, The O.C. and Arrested Development, all of which were set amid its rolling green hills and picture-perfect beaches. But I had come to Newport Beach to commune with the stars of Old Hollywood, who began staking their claim to this idyllic spot just one hour south of Los Angeles during the silent film era.

In the Golden Age of Hollywood, Newport Beach's lure was not so much its land, dotted as it was with big-band ballrooms and smoke-filled cocktail bars. It was its water, and specifically the sprawling recreational harbor where the stars docked their yachts and sailboats.

"These guys treasured their privacy," Bob Verini, the Hollywood historian, said of the members of the original Rat Pack, which predated that eponymous '50s gang of stars and included Humphrey Bogart as ringleader and Judy Garland, Cary Grant and Spencer Tracy as devotees. "There was no privacy in Hollywood. But when they got on the water and beyond the 3-mile limit, out there, they could drop all the pretense and be their authentic selves."

Lauren Bacall, the seductive film star who was also Bogart's fourth wife, never loved Newport Beach. But she loved Bogart, who did.

Bogart, whose craggy face and gravel voice became the cloth from which all film noir heroes were cut, loved this coastal hideaway because it was the home of his favorite lady: a 55-foot schooner named the Santana. The secret to his love affair with Bacall was simple: She knew how to make room for her husband's passion for the sea.

Bogart bought the Santana in 1945, buying it for $50,000 from Dick Powell, a fixture of Warner Bros. musical revues. It was a banner year for Bogart — the same year he married Bacall, whom he met as an unknown 19-year-old ingenue starring opposite him in To Have and Have Not, the smoldering adventure film released by Warner Bros. just a few months prior.

Los Angeles didn't get its own public marina until 1965, so Bogart brought his new wife and his new boat to Newport Beach. There is perhaps no love story more enduring than that of Bogie and Bacall, and no way to tell the story of their intense May-December romance without acknowledging that it was actually a love triangle, with the third party being the sea.

Bacall didn't love the close quarters of the Santana, or the unbridled testosterone of its crew. She also wasn't crazy about the close-knit social circles of Newport Beach, where she — a Jewish woman from New York — often felt anti-Semitism, as well as judgment for her decision to earn her own money.

But Bogart relished the water, and for visitors who want to understand why, it's easy to get out there. At Newport Harbor, compact, simple-to-steer electric Duffy boats can be rented for about $100 an hour (with a two-hour minimum), and chartering them requires no boating experience at all. The boats seat up to 10, have a distinctive canopied top and, most importantly, are about as easy to operate as an automatic-transmission car. (Those who crave more horsepower, or want a captain to handle the water for them, can reserve a chartered yacht or catamaran from a number of companies like getmyboat.com).

Pulling out of the harbor in my own electric Duffy, I found myself in a greatest-hits reel of Old Hollywood lore. Immediately I hit the site of the seminal barge scene of 1917's Cleopatra, starring that almond-eyed vamp, Theda Bara. The waters here are mirror-smooth and deep turquoise, and it was only too easy, as I crawled along the harbor at the requisite 5 mph, to imagine I was among those hundreds of eager film extras, heading out to a staged battle amid two dozen costumed scows. 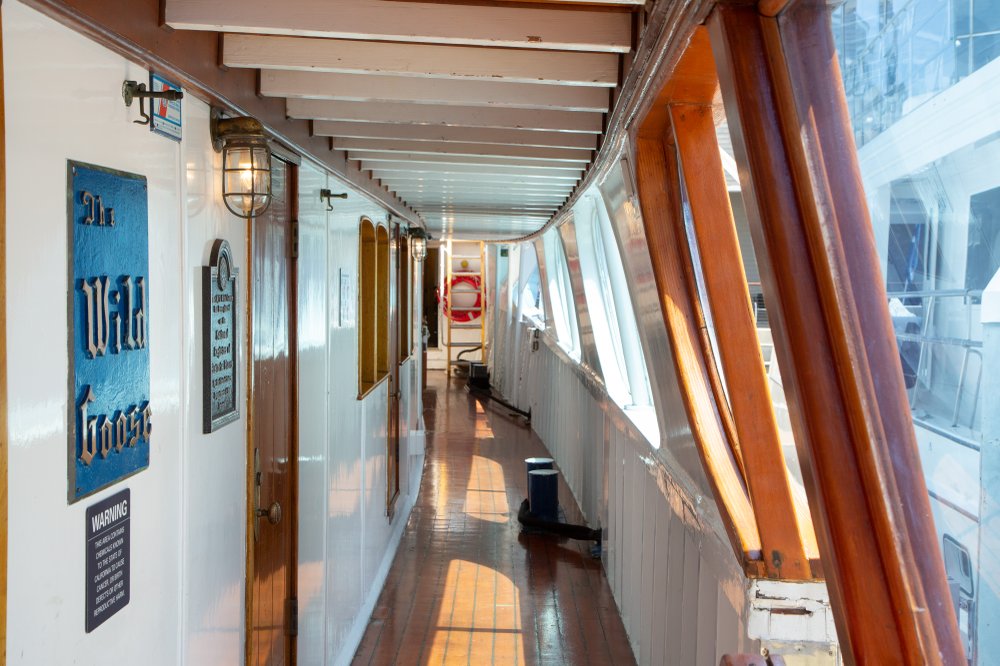 I then glided right past the historic Balboa Pavilion, with its lean sloping roof and handsome Victorian-era cupola, where Big-Band era fixtures like Duke Ellington and Benny Goodman hosted nighttime bashes in the 1930s. On the other side of the peninsula, Balboa Pier juts out into the Pacific. It was here that a young football star named Marion Morrison broke his collarbone bodysurfing, and traded in athletics for a film career under the stage name John Wayne (true aficionados of The Duke can also sail past the Wild Goose, his beloved restored Minesweeper yacht, now permanently docked in Newport Harbor, or sit at his personal table at the storied A Restaurant, a steak-and-whiskey joint tucked off the West Coast Highway, aka California 1).

And at Peninsula Point, I gaped at the sprawling Nantucket-style cottage once owned by the first-ever Miss Newport Beach, Shirley Temple herself. Just next to this spot, the triple-decker Catalina Flyer ferry had just charged out toward Catalina Island.

Catalina Island was a magnet for Bogart and his crew. It sits half a day's sail off the coast, and its rugged wild lands, its elegant little town named Avalon, and its art deco dance hall lured him like a siren. Getting there today is a much quicker affair; the Catalina Flyer departs daily at 9 a.m. and streams straight to the Channel Islands — the archipelago of which Catalina is the heart — in 75 minutes. For those who truly want to boat like Bogart, however, there are dozens of private sailboats and yacht companies offering vessels for charter.

But I didn't need to go all the way to Catalina to commune with Bogart, or to understand his lust for Bacall. Duffy boats can't go past the mouth of Newport Harbor, but it's easy to fill an entire afternoon navigating the nooks and turns of this storied passage. Turning my Duffy into the narrow waterway that runs between Newport Beach's body and the sliver that is Lido Isle, one of the best monuments appeared on my starboard side: the Balboa Bay Club, the hideaway that has been hosting elite Californians for 70 years, and had barely just opened when the 45-year-old Bogart took the 20-year-old Bacall for a rendezvous after their wedding. Clark Gable, Lana Turner and David Niven were frequent guests as well.

The club is members-only, but its Waterline restaurant, which boasts a "water-to-table" menu, and its A&O gastro pub, which offers craft beers, small plates and music in the evenings, are both open to the public and give diners the chance to channel their own Old Hollywood experience.

"They had a great relationship," said Stephen Bogart, the couple's son, of his parents' love. "To be able to live that life and to be that couple, one of the top couples of the century ... it's pretty amazing to have lived that life, as I told my mother a number of times."

Stephen Bogart was only 9 when his father, a perennial smoker, died of esophageal cancer. His memories of his father are limited, he admitted, "but I remember going on the boat, the smells of the water." 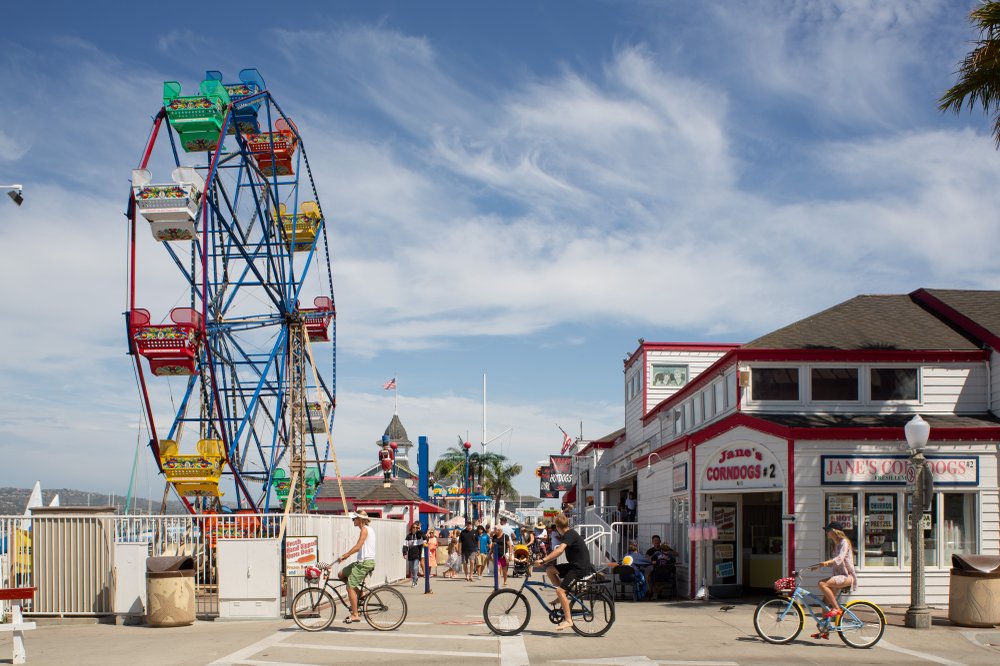 The ferris wheel at Balboa Fun Zone, in Newport Beach, Calif., dates back to 1936. (Photo by Beth Coller via The New York Times)

The Santana would have been docked at the Newport Harbor Yacht Club, which can be visited by taking the 40-passenger, three-car Balboa Island Ferry from Balboa Island. Before climbing aboard and paying for my ticket — it's an adorably reasonable $1 per person and car — I made sure to wander this preppy man-made island. The residential streets here are all named after gemstones, and along Marine Avenue, its candy-colored main drag, a delicious duel exists between two frozen banana shops (the confection is Balboa Island's trademark dessert, a fact Arrested Development fans will be aware of) over who invented the chocolate-dipped treat first.

The ferry took me right to the heart of the Balboa Fun Zone, where the same bright Ferris wheel has been spinning since 1936 and a bayside boardwalk offers bungee-jumping, arcade games, and all the corn dogs and cotton candy that seaside summer days require.

But in Newport Beach today, it's at Lido Marina Village, where visitors can "dock and dine" at the restaurants dotting the harbor, or catch a film at the single-screen Lido Theater — which opened in 1938 with the premiere of Bette Davis' Jezebel and still sports its original art deco tiling and outdoor ticket booth — where the spirits of Bacall, Bogart and their Hollywood cronies are felt most fiercely.

Over at the modern Lido House Hotel, a whitewashed manor of beachy vibes and nautical flourishes, I could almost see Bacall and Bogart snuggling on the chic rooftop lounge — the hotel opened in 2018, but its inspiration is all old Hollywood chic.

And that's the thing about Newport Beach, with its effortless boating, its casual luxury and its seductively mild climate. It's modern and elegant, and unabashedly a playground for the very rich. But out on the water, there's a history that ensnares you — much like a young Lauren Bacall did herself, onscreen, with a flash of her mythological "The Look."

"When my father went to Newport, it was a heady time," said Stephen Bogart. "But it's been 62 years since his death, and it still resonates today."