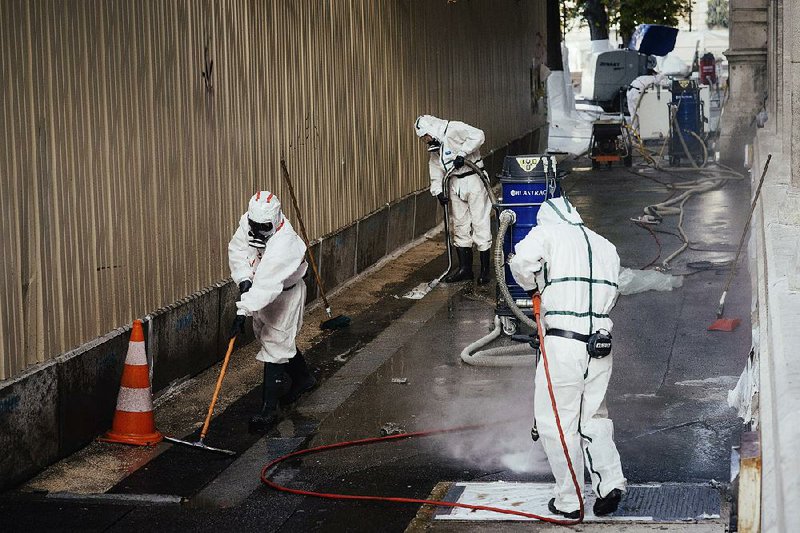 Workers clean up a lead-contaminated area near Notre Dame Cathedral in Paris on Sept. 2. The fire April 15 at the cathedral spread clouds of lead dust that officials were slow to deal with, an investigation shows.

PARIS -- The April fire that engulfed Notre Dame contaminated the cathedral site with clouds of toxic dust and exposed nearby schools, day care centers, parks and other parts of Paris to alarming levels of lead.

The lead dust came from the cathedral's incinerated roof and spire, which contained about 460 tons of the dangerous metal.

Five months after the fire, French authorities have refused to fully disclose the results of their testing for lead contamination, sowing public confusion, while issuing reassuring statements intended to play down the risks.

Their delays and denials have opened authorities to accusations that they put reconstruction of the cathedral -- which President Emmanuel Macron has pledged to complete in five years -- ahead of the health of thousands of people.

A comprehensive investigation by The New York Times has helped fill out an emerging picture of a failed official response. It found significant lapses by French authorities in alerting the public to health risks, even as their understanding of the danger became clearer.

The April 15 blaze nearly destroyed the 850-year-old cathedral and brought immediate scrutiny to whether adequate fire protections had been in place to safeguard a gem of Gothic architecture visited by 13 million people a year.

The cathedral's roof and spire succumbed to the flames that night and collapsed. But the billowing smoke carried its own perils. It contained high quantities of lead, according to test results in confidential reports and others released by the government.

The Times' investigation drew from confidential documents, including warnings by labor inspectors, a police report and previously undisclosed lead measurements by the Culture Ministry.

The documents, as well as scores of interviews, make clear that French authorities had indications that lead exposure could be a grave problem within 48 hours of the fire.

But it took a month before city officials conducted the first lead tests at a school close to Notre Dame. City and regional health officials have not tested every school in proximity to the cathedral.

The tests showed levels of lead dust above the French regulatory standard for buildings hosting children in at least 18 day care centers, preschools and primary schools.

In dozens of other public spaces, like plazas and streets, authorities found lead levels up to 60 times over the safety standard.

The highest contamination levels, revealed in confidential Culture Ministry documents obtained by the Times, were at different spots in, or near, the cathedral site. Authorities failed to clean the area in the immediate aftermath of the fire and waited four months to finish a full decontamination of the neighborhood.

The Culture Ministry, which is responsible for cleaning the site and rebuilding Notre Dame, also failed or refused to enforce safety procedures for workers, leaving them exposed to lead levels more than 1,000 times the accepted standard.

"These are astronomical levels, and the attitude of health authorities is inexplicable," said Annie Thebaud-Mony, a prominent public-health expert in France, who has been leading public calls for more transparency in the aftermath of the fire.

Some French officials and lead experts have cautioned against "paranoia" and argued that the test results may in part reflect broader underlying problems with lead contamination in Paris.

Lead exposure poses the greatest risk to children as well as pregnant women and nursing mothers, who can pass lead on to their children.

If ingested, lead interferes with the normal development of the nervous system and can leave young children with permanent cognitive damage.

More than 6,000 people under age 6 live within a half-mile of sites that tested high for lead levels.

In the aftermath of the fire, the official response was divided among city, regional and national officials. Each had distinct responsibilities, and sometimes competing interests, as lines of authority collided, undermining accountability.

City officials said they had wanted to communicate more openly with the public but were following the lead of regional and national agencies.

"The state was afraid to make people afraid," said Anne Souyris, the city's deputy mayor in charge of health.

Paris police headquarters sits directly across from Notre Dame and served as a command center the night the cathedral burned. A day care center inside the police building was closed that night, for fear it could be crushed by falling debris.

Within days, the day care center, which was for children of officers, was tested for lead. In some areas, the tests found lead levels up to 2.5 times the French standard for buildings hosting children, according to a confidential police document.

The officers' children were moved to a second day care center farther from Notre Dame. But it turned out that second building was contaminated, too.

New tests revealed more alarming results, which were initially kept from officers and the public.

At the second day care center, 20 measurements showed lead levels at or above the threshold for buildings hosting children.

In early May, city officials finally closed the second day care center for decontamination and informed officers of the situation.

But still no broader alarm was sounded.

One problem was that different messages were coming from different government agencies.

On May 9, the Regional Health Agency released a reassuring statement to the public, merely confirming "the presence of lead dust in the immediate surroundings of the cathedral."

At the same time, officials from the Culture Ministry were playing down the risks in a meeting with public-health authorities, labor inspectors, police and local officials, according to one person who attended.

Antoine-Marie Preaut, a regional conservator at the Culture Ministry, said in a phone interview that authorities took the concerns seriously. "We haven't been downplaying the risk over lead contamination," he said.

Public schools and day care centers near Notre Dame remained open for weeks after the fire. In early May, city officials issued "recommendations" for cleaning at schools around the cathedral but offered little guidance to parents.

Then, without any public notice, the city began conducting the first tests for lead at public primary schools in mid-May. During the next two weeks, nine primary schools and day care centers close to Notre Dame were tested -- six of which had lead levels up to 2.5 times the regulatory threshold.

Schools closed for the summer in July, and public anxiety began to mount. In early July, Mediapart, a French investigative website, published the first leaked documents about lead concerns in and near Notre Dame. Parents demanded greater clarity about the risks, and environmental groups sounded alarms.

Earlier, the regional health agency had "invited" pregnant women and children under 7 to have their lead levels tested. Now the agency focused on schools.

As results came in, it became clear that more and more schools had alarming levels of lead.

In a telephone interview, Souyris said local authorities had not publicized test results because they wanted to coordinate with state officials.

Though the Regional Health Agency has resisted calling for mandatory testing of children, the parents of roughly 400 children have had them tested, many on their own initiative, the agency said in a statement Thursday.

Of those, 8.5% showed levels at or above the French regulatory threshold for concern.

The people exposed to the highest levels of lead have been workers at the cathedral itself.

Work at the site was stopped only after seven alarming letters, dozens of emails and a series of heated meetings between labor inspectors and those trying to carry out the reconstruction of Notre Dame.

Confidential letters from labor inspectors, obtained by the Times, reveal lapses that exposed workers to exceptionally high levels of lead.

Tests taken inside the cathedral found lead levels up to 588 times above the regulatory threshold.

A month after the fire, one labor inspector warned that safety gear was not being worn by some workers and urged authorities "to implement, without waiting, measures to protect employees for risks of lead exposure."

Inspectors also noticed that workers operating inside the cathedral were not decontaminating their clothes as they left, exposing their families to possible lead contamination.

The inspector threatened to shut down the site. Three days later it was.

Of the dozens of workers who have been at the site, Preaut said, three had shown lead levels over the regulatory threshold in their blood. They are being monitored by doctors.

Work on the cathedral resumed on Aug. 19 with a host of new safety measures.

Yet even after construction resumed, workers could still be seen wearing no gloves or masks on the northern side of the cathedral. Lead levels in that area were up to 10 times above the recommended threshold, according to the Culture Ministry's own measurements.

On the roof, where some workers operated without masks or gloves for months, some measurements were 2,300 times above the safety threshold.