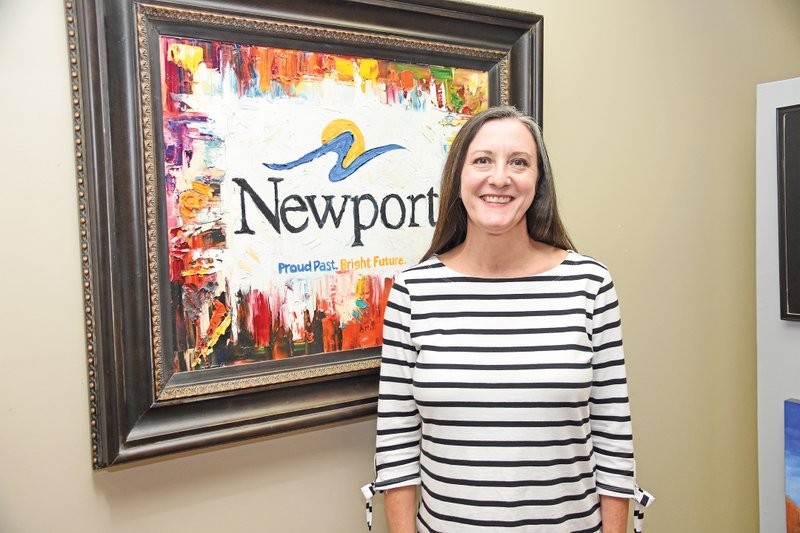 Julie Allen, executive director of the Newport Area Chamber of Commerce, was elected to the board of directors of the Arkansas Economic Developers and Chamber Executives during its annual conference in Fort Smith. Allen has been with the Newport chamber since 2002.

Julie Allen may not have achieved the stardom she envisioned for herself as she was growing up, but her name is familiar to a lot of people in Jackson County and beyond.

Allen, 47, who is the executive director of the Newport Area Chamber of Commerce, was elected in August to the Board of Directors of the Arkansas Economic Developers and Chamber Executives during its annual conference.

This was not her originally calling.

“When I was little, I said I always wanted to be famous,” Allen said. “But I wasn’t good enough to be a Solid Gold dancer. So I got into radio.”

Allen, who graduated from Stuttgart High School in 1990, worked at a local radio station, KWAK, part time while in high school. She attended Arkansas State University in Jonesboro where she earned a bachelor’s degree in radio and television. After a short stint in radio in Poplar Bluff, Missouri, she moved to Jacksonville, Florida, where she worked for several years as a disc jockey and music director for a country station owned by Paxon Communications.

“I was a radio DJ; it’s the direction in life I went,” she said. “One of the stints I had was in Florida for three or four years, working for a big radio group there.”

While in Florida, Allen met the man who brought her to Newport.

“I had three different roommates from Arkansas,” she said. “The third one was a friend of mine from Newport, who invited his friend to go deep sea fishing in Florida. That is how I met my future husband, Michael.

“So I had to move to Florida to meet a guy who was two hours from my hometown basically.”

Julie Allen moved back to Arkansas in 1998, the same year she and Michael were married.

“He had a family business that he was going to run,” Allen said. “He’s a third generation masonry contractor. I moved back to Arkansas and I wasn’t really sure what to do.”

For a while, Allen drove to Jonesboro every day to work for a radio station in the mornings. But that wasn’t for her.

“I realized I never saw my new spouse, so I started working at the newspaper here,” she said. “It got me plugged in really quickly to what was going on in the community.”

After a few years, the Newport Chamber director Mike Metcalf died unexpectedly in 2002.

“I applied for the job and got it,” Allen said.

So, for the past 17 years, Allen has been the executive director of the Newport chamber.

“I couldn’t envision two weeks from then at that point,” she said, referring to when she started the job in 2002. “During the interview process, the board asked me what does the chamber do? I said, ‘I can’t honestly answer that. But I think part of what our community issue was is identifying what the chamber does in our community and making sure others are part of it.’

Being elected to the state board is a big honor for Allen.

“It is a fantastic honor just being asked with obviously lots of qualified chamber and economic development directors from across the state,” she said. “I think that Newport has done a lot in the community and with economic development over the last decade or so. I think it has made people take notice of our efforts. I hope that I can personally help others do the same in their communities as part of the state board.”

Allen said she was asked by incoming president Katherine Holmstrom if she would like to be a part of the state board.

“She is the one who developed the slate of officers who were elected during the conference,” Allen said of Holmstrom, who is the senior project manager at the Arkansas Economic Development Commission.

“As incoming president, I have two at-large positions to fill,” Holmstrom said. “I’ve known Julie since I started at AEDC in 2011. She’s friendly and down to earth. She’s a hard worker and a great ambassador for her community and our organization. She’s incredibly respected among her peers.

“I thought she would be a great candidate.”

Allen said the board is made up of different regions of the state.

“I’m elected to one of the at-large positions,” she said. “It does training, professional developing, conferences and networking. They do some advocacy at the state Capitol in Little Rock. They keep us up to date from across the state on chamber and economic development news. The biggest thing of the year is the state conference, which rotates from town to town.”

After moving to Newport, Allen said she saw the community lose three industries and 1,200 jobs in the span of a few years.

“A good portion of our middle income families had to leave,” she said. “It really showed. It really hurt Newport and Jackson County. A group of folks, and I was a part of that, met for a year and a half to see if we could move forward. Out of that came the sales tax for economic development, which is now the Economic Development Commission.”

In the last few years, Allen said the area has rebounded from the losses of those businesses.

“With the sales tax and economic development effort, and then the Chamber of Commerce, quality of life and small business programs and stuff like that, we have been able to rebound to having more jobs than we lost,” she said. “We’re seeing new commercial development. We have two of the five medical marijuana cultivators in the state in Jackson County.”

Allen said it took a while for the area to rebound.

“Everyone felt deflated because things had changed so much,” she said. “As luck would have it with the three industries vacated at the same time, it really hurt our community.

“It took a while to rebound. We have rebounded and exceeded the expectations from where we were trying to develop a plan for the future all those years ago.”

Allen said being from Arkansas is a good thing.

“One thing I love about Arkansas and another reason I’m excited about being a part of the state organization is because Arkansas is more like two degrees of separation instead of six or seven,” she said. “If you play the ‘who you know game’ with anybody from Arkansas, you figure out you have ties to just about everybody somehow.

“With an organization, whether it’s paid or volunteer, connections are important in that nobody wants to reinvent the wheel. If you can find out things or programs that others are doing that are successful that you can implement where you live, that will make your community successful.”

With that said, Allen said getting people and businesses to move to Newport and Jackson County is relatively easy.

“What people are telling us is that it’s an extremely open and friendly business climate in Newport,” Allen said. “We’re told that it’s easy to do business here, whereas in larger communities, it may take six weeks to two months to get things done.

“We’re fortunate that everybody is on the same page, moving in the same direction,” referring to the mayor, county judge, chamber board and economic board.

“There are no egos in the way,” Allen said. “There might be some disagreements, but nobody holds a grudge. You don’t find that in every community.”