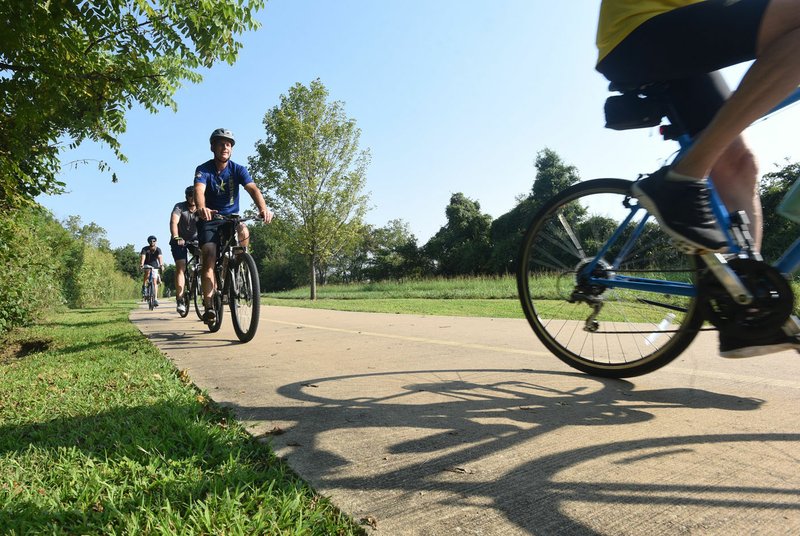 NWA Democrat-Gazette/FLIP PUTTHOFF Riders in Rogers head south Sept. 7 along the Razorback Greenway during the Square to Square bicycle ride from Bentonville to Fayetteville.

The Razorback Greenway just turned four years old and is impacting the way Northwest Arkansans live one mile at a time.

The trail extends more than 37 miles north to south from south of Mercy Way in Bella Vista to Town Branch Trail in south Fayetteville.

Go to www.nwatrails.org/map/ to access an interactive map of the Northwest Arkansas trail system.

The plan for the greenway's development took into account where people were and where they wanted to go, she said.

The greenway cost $30 million to develop and was paid for with a $15 million federal grant and a $15 million matching grant from the Walton Family Foundation, he said.

"It really ties the region together," said Tim Conklin, commission programs manager. "People experience other cities and parts of the region that they really didn't get to see before."

"The idea of the Razorback Greenway connectivity from north to south, the whole length of it, was unique," said Erin Rushing, Northwest Arkansas Trailblazers executive director. "We didn't have a continuous piece of greenway trail like that."

NWA Trailblazers is a nonprofit organization helping develop multiuse trails in the region.

Fayetteville had 5 miles of trail established at Scull Creek, which was later renamed to be part of the Razorback Greenway, said Connie Edmonston, Fayetteville Parks and Recreation director.

The concept of a regional path was new for the region, Edmonston said, but Fayetteville has been invested in the cycling culture since 1978.

"We started it on our own," she said. "It was when Northwest Regional Planning Commission got involved, and then they got the Walton family involved, that it took it off and got us to where we are today."

The amount of people walking on the trails during that time increased as well.

"It's met and exceeded expectations, and I don't know that anybody really thought that it would be what it is," Hawkins said. "There were expectations that this was really going to be great, but it's better than great."

Heightened use has increased collaboration between the cities, Wright said.

City parks and recreation directors are able to work together to create recreational opportunities unique to the greenway, he said, such as the annual Square to Square Bike Ride.

About 2,000 people attended the 2019 ride on Sept. 7, Edmonston said. Participants rode about 30 miles from the downtown square in Bentonville to Fayetteville's square.

Wright said the connectivity has created a healthier rivalry between Northwest Arkansas cities.

"I feel like the Razorback Greenway really dimmed the lights that we shine really bright on Friday nights during football season," Wright said. "These towns really are partners, and I think that is the thing that's exceeded my expectations more than anything."

The greenway is also influencing the region's economy, said Mervin Jebaraj, director of the Center for Business and Economic Research at the University of Arkansas.

"Probably one of the most significant impacts has been how much it has made bicycling in Northwest Arkansas an important economic activity -- so much so that people are coming here from other parts of the country," Jebaraj said.

The greenway has resulted in about $27 million in tourism dollars coming into the region annually, he said.

"They're not just here riding the trials. They're eating in restaurants, they're staying in hotels," Jebaraj said. "There's quite a bit of tourism impact, and we have a lot of other tourism amenities like Crystal Bridges and things for them to incorporate into their stay here."

The development of the trials is making the region more holistic from a tourism perspective, he said.

"It's a segment of the tourism economy that's genuinely well-healed," Jebaraj said of biking.

The region would benefit more from further developing the bicycling infrastructure, he said.

"We have developed a reputation for bicycling in Northwest Arkansas," he said. "It's something that cities will need to invest in going forward."

"I think everyone agrees that the first domino that fell in Springdale's ongoing downtown revitalization was when the Razorback Greenway was announced and the subsequent construction of it," he said. "It runs through the heart of our downtown."

"It started the process of bringing people downtown, which made it easier for small entrepreneurs to open and try to capture some of that business," Rogers said.

Municipal developments followed, he said. Some of the efforts include the addition of city parks, the demolition of dilapidated buildings and business renovations.

He said the momentum shows evidence of continuing.

"We're going to continue to see commercial and retail build out," Rogers said. "The next thing that will need to happen, and it will happen as the market will bear, is improve residential opportunities downtown."

Mayor Peter Christie said he anticipates Bella Vista's business development to benefit much the same way Springdale's did as the greenway extends farther into the city. The latest segment added about a mile in 2018 from the tip of Lake Bella Vista into Blowing Springs, he said.

Trails in the city will include creating a spur from where the Razorback Greenway ends at Blowing Springs to the Metfield Recreation Complex on Club House Drive, Christie said.

"It's a couple of miles, and it's fairly flat," he said. "There are 3,600 homes with service all along there that's within easy bicycling distance."

Additional plans include widening Mercy Way Bridge from two lanes to four with a fully dedicated bicycle path on one side and a pedestrian walkway on the other, Christie said.

The addition of the bike lane on the bridge will provide students with a safe path to school, Christie said.

The trail to the recreation complex is still in the design phase. Both projects are estimated to be completed by 2022, he said.

Christie said he hopes investors will see the potential and develop businesses along the greenway.

"One of the challenges that we have as a community, is we don't have a lot of commercial development," he said.

"It's putting us on the map," Christie said of the greenway. "It's getting the residents yet another amenity. It's safe, it's healthy, and I am convinced it's going to continue to bring all the residents of our community even closer." 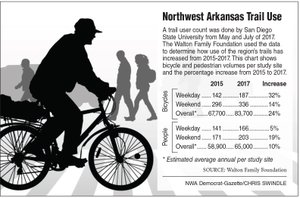