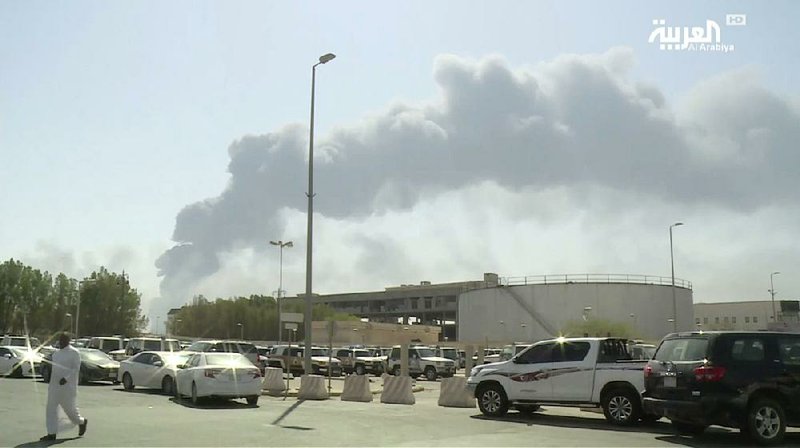 Oil surged the most on record after a devastating weekend attack on key oil facilities in Saudi Arabia intensified concerns about growing instability in the world's most important crude-producing region.

In an extraordinary start to the week's trading, Brent futures in London leaped a record $12 a barrel in early trading Monday, before settling just above $69 for the biggest one-day percentage gain since the contract began trading in 1988. Prices may remain elevated after Saudi officials downplayed prospects for a rapid recovery of production capacity, analysts said.

Saudi Aramco faces weeks or months before most output from its giant Abqaiq crude-processing complex is restored, according to people familiar with the matter. Saudi Arabia's Foreign Ministry said Iranian weapons were used in the attacks on Saudi Aramco, while some U.S. officials blamed Iran for the attacks.

If crude stockpiles can tide over global markets and production bounces back quickly, the episode will have a negligible effect on pump prices.

But should the recovery take weeks or months, the impact could be far-reaching and lasting. Higher fuel prices can not only motivate consumers -- the main drivers of the economy -- to cut spending elsewhere, but they can also ultimately reach nearly every corner of the economy by raising the cost of doing business -- particularly for airlines, cruise ships, railroads, utilities and retailers.

Falling demand had sent gasoline prices lower after Labor Day, so consumers should be able to bear a short-term surge in prices more easily, analysts said. On Monday, the average price for a gallon of gasoline in the U.S. was $2.564, about 28 cents lower than a year ago, according to AAA.

The effect at the pump should start to become more pronounced late today or Wednesday, according to Patrick DeHaan, senior petroleum analyst at GasBuddy. That's after gasoline distributors adjust prices to match gains in futures and regional spot markets.

He said an increase of 15-30 cents per gallon in average U.S. pump prices is likely during the repairs in Saudi Arabia.

President Donald Trump said he may release oil from the 600 million barrel U.S. strategic petroleum reserve, held underground in Texas and Louisiana, to smooth out any price increases brought on by the attacks, but the dilapidated state of the reserves and pipeline bottlenecks may limit the benefit.

"It's a real issue," said Jason Bordoff, a former official in President Barack Obama's administration who has studied the strategic petroleum reserve and now works for Columbia University. "I don't think the SPR could put the maximum release capacity on the market right now."

For oil markets, it's the worst sudden supply disruption ever.

The attack Saturday struck the world's biggest crude-processing facility in Abqaiq and the kingdom's second-biggest oil field in Khurais, exposing a vulnerability at the heart of the global oil market.

"No matter whether it takes Saudi Arabia five days or a lot longer to get oil back into production, there is but one rational takeaway from this weekend's drone attacks on the Kingdom's infrastructure -- that infrastructure is highly vulnerable to attack, and the market has been persistently mispricing oil," Citigroup's Ed Morse wrote in a research note.

"We have never seen a supply disruption and price response like this in the oil market," said Saul Kavonic, an energy analyst at Credit Suisse Group AG. "Political-risk premiums are now back on the oil-market agenda."

Saudi Aramco produced 9.85 million barrels per day in August, according to the U.S. Energy Information Administration. But Saturday's attack forced the kingdom to suspend production of 5.7 million barrels of crude, or nearly 6% of the 100 million barrels the world consumes each day.

And while oil production in the U.S. is booming and its reliance on imports is waning, the U.S. still needs oil from Saudi Arabia.

Asia is the biggest consumer of Persian Gulf oil, absorbing three-quarters of the oil that traveled out of the region last year. Saudi Arabia provides about a fifth of China's crude imports, more than 37% of Japan's and almost a third of South Korea's.

Saudi oil facilities as well as foreign tankers in and around the Persian Gulf have been the target of several attacks over the past year.

The escalation coincided with Trump's decision to pull the U.S. out of the 2015 nuclear agreement with Iran and reimpose crippling economic sanctions against the Islamic Republic.

Information for this article was contributed by staff members of Bloomberg News; by Taylor Telford and Thomas Heath of The Washington Post; and by Cathy Bussewitz of The Associated Press. 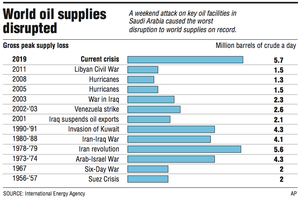