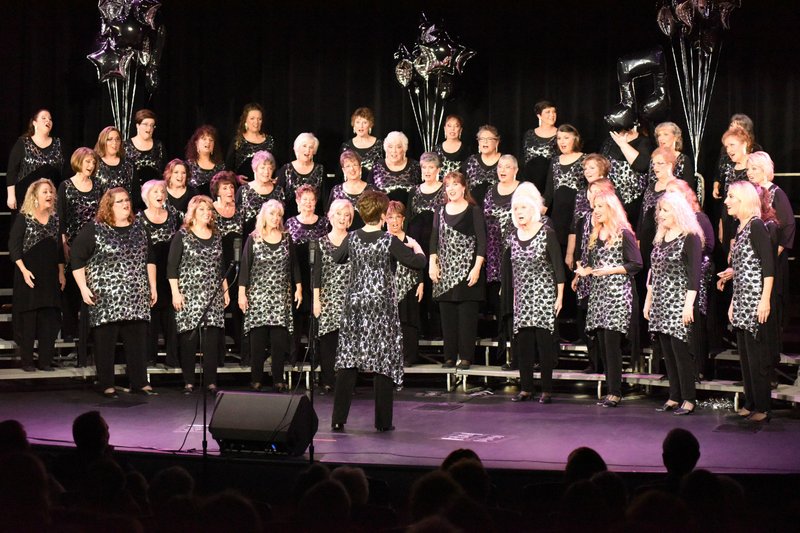 The Top of the Rock chorus, shown here in a file photo from a previous Christmas show, will compete at the Sweet Adelines International conference in New Orleans on Thursday. (Special to the Democrat-Gazette)

Each one of the 65 women who is part of the Sweet Adelines Top of the Rock chorus strives to perfect her own personal pitch, participating in three-hour practices each week, attending weekend workshops and summer camps and spending personal time learning music so she can deliver her own part as well as possible.

"You don't have to be a soloist, though," says Kaye Washburn, a member of Top of the Rock since 1998 when she and her husband moved to Conway from Neenah, Wis. "We blend together, all the different voices. It's beautiful."

There is, indeed, inherent beauty in their coming together — this diverse group of women, ranging in age from 12 to 80 — to do something they love. And their hard work has paid off.

Top of the Rock is a female barbershop-style chorus, originally named Little Rock Chorus, founded in 1961. This week, the chorus is competing against the 34 best Sweet Adelines choruses from around the world in the international Sweet Adelines competition in New Orleans, having secured a wild card bid in 2018. The chorus finished second overall in the Region 25 Sweet Adelines competition at Robinson Center Performance Hall, right behind the Talk of Tulsa Show Chorus, as well as second in the Division AA category for midsize choruses and a tie for most improved chorus.

Top of the Rock will be the 19th chorus to perform at the international competition Thursday. If the chorus places in the top 10, it will sing a larger package in the finals Saturday.

"We are obviously amateurs, and we're a volunteer organization," says Top of the Rock's director Kelly Causey. "But we work very hard to maintain a high level of performance for ourselves and for our audience. The craft, four-part a cappella, is challenging, but for a bunch of nonprofessional musicians, I think we did a pretty darn good job."

Causey, who majored in business and now works in the computer science field, enjoyed singing in her church choir before she saw an article in the newspaper about Sweet Adelines in 1985 and decided to check out the chorus.

"I just thought, 'Where have these people been?' I was hooked from the very beginning," she says.

She co-directed the chorus with former director Peggy Graham for several years before taking on the role of director herself.

"The music we make is thrilling, and it is exciting," Causey says. "That is why many of us come out, but so often we stay because the family aspect of it, the support system, the sisterhood, you know? I think of it as a sisterhood in song. It's amazing what we can accomplish together and the love we have for one another. That aspect of it is something that you don't necessarily anticipate, but, man, you can't deny it."

Yavonda Chase isn't denying anything. Singing has long been a passion for her, but other obligations took precedence for a while.

Her sister, Rhonda, recruited her to Top of the Rock three years ago and once she got involved she realized how much she had missed singing.

Chase has practiced until her ribs were sore, but says it's all worth it.

"The idea behind barbershop is — and this is really simplified — that when all four parts lock, you create a fifth note that you hear above the chord, which is just really neat. And it only happens when everybody's singing their part," she says.

She has participated in regional competitions for each of the three years she has been in the chorus and is excited to be going to her first international one.

This will be Kathy Allison's sixth international competition.

"Just making music with that many people is so awesome, but being able to go to international contests is really kind of like the icing on the cake, and not that many choruses get to do that," Allison says. "A couple years ago, they had it in Las Vegas at the MGM Grand [hotel]. There were about 10,000 Sweet Adelines there for chorus competition and quartet competition. I was a spectator — I just wanted to go as a spectator one time — and it's just awesome to see all the talent that is there and the creativity that people have, and the love of the music."

Allison was part of a chorus in Hot Springs Village — where she moved from Washington in 1998 — for about four years.

"I sang with the local choir here in Hot Springs Village, and I sang a little bit in high school. But everything I've learned about music truly has been from Sweet Adelines. We are an educational 501(c)(3) organization, where our main focus is to entertain and educate our audience about the American art form of barbershop," she says. "When I joined Top of the Rock, that was one of my goals, I really wanted to compete, you know, internationally if we could. And, of course, we have been able to several times."

Washburn was in the Sweet Adelines Fox Valley Chorus in Neenah before moving to Arkansas for her husband's job, and she wasn't about to give up being a part of such a group.

"That was part of my agreement for moving here, that there was a Sweet Adelines chorus in the area," Washburn says. "It turned out there was a really good one."

She had been invited to check out Fox Valley Chorus by a friend.

"I walked in, and it was love at first sight — or first hearing, I guess — when I heard them perform," Washburn says. "It was like, 'I want to do that, but I don't think I can do that.' It turned out that, you know, I could do that."

Finding the Fox Valley Chorus was a "life-changer" for her, she says. She had sung in her high school chorus and in church, but singing had taken a back seat to raising her family.

"Except for singing with the radio or in the shower or whatever, I wasn't really singing," she says. "You go through your adult life following your kids and going to their sports and all, and all of a sudden, here is something that I can do."

She grew up in a family that enjoyed gathering around the piano while her sister played.

"I was the youngest so I almost never got to harmonize because the harmony parts got taken away," she says. "I've gotten to do a little bit of harmonizing with Top of the Rock, but I do still sing lead, which is mostly melody. But the thing is, it gave me a chance to use my singing voice. And it's just an amazing organization, and when you go to rehearsal it's like walking into a room with 65 of your best friends."

Clara Principe, 12, is the youngest of the group and she, too, feels a kinship with the women in the chorus.

"I don't really feel my age when I'm there," says Clara, whose mother, Anne, and sister, Reilly, are also in the chorus. "I just feel like I'm part of the group. I really like the sense of community and just how fun it really is. It's like a release from life."

Women can participate simply by singing in the chorus or they can seek one of the various leadership roles available for the 21,000 or so Sweet Adelines chorus members around the world, some in the organization's Tulsa headquarters and some locally.

Allison serves as Top of the Rock's makeup chairman, helping members of the chorus achieve their best looks while still creating a somewhat uniform appearance among the group.

"It's just really cool, and I think we're in a really good spot. We're in a position to maybe get in the top tier, and that's always your goal, you know? Even if we could get in the top 15 or 20, that's wonderful for a chorus our size," says Washburn, who insists she's not nervous. "We're probably going to have more nerves on Thursday. But I'm telling you, if we get in the top 10 our nerves are gone. We're just going to be so excited. We've got those fun songs to sing, and we're just gonna have a ball."

Video on the web