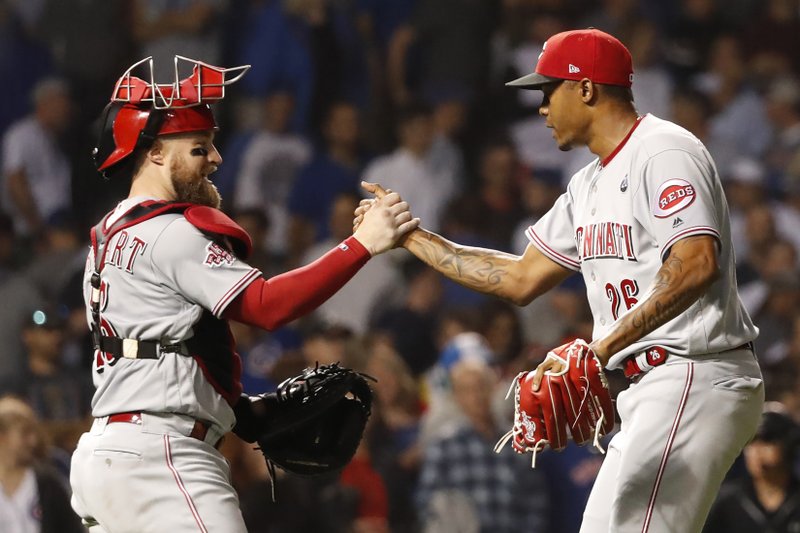 CHICAGO -- The Chicago Cubs had been scoring in bunches lately.

Then Sonny Gray took the mound for the Cincinnati Reds.

The Cubs were shut down by Gray and two relievers Tuesday night, falling 4-2 to the Reds in a loss that hurt their playoff positioning.

Chicago had won five in a row, outscoring its opponents 59-18 during the stretch. But it managed just two runs against Gray (11-7) before Michael Lorenzen and Raisel Iglesias closed out the five-hitter for Cincinnati.

The Cubs dropped into a tie for the second NL wild card with Milwaukee, which held off San Diego for a 3-1 victory. They also missed out on an opportunity to gain ground on NL Central-leading St. Louis, which lost 6-2 to Washington.

Rookie Aristides Aquino hit his 16th home run for Cincinnati, and Joey Votto and Eugenio Suarez each drove in a run.

Gray struck out nine in 6 2/3 innings. The All-Star right-hander improved to 5-1 with a 1.46 ERA in his last nine outings

"I felt pretty good out there today after I kind of got going," Gray said.

Yu Darvish (6-7) struck out 13 in seven innings for Chicago, but he was hurt by a slow start. Kyle Schwarber had three hits and two RBI for the Cubs.

"Yu is on quite a run right now, but unfortunately their guy is really good, too," Cubs Manager Joe Maddon said. "In spite of us swinging the bats well lately, Sonny did a nice job also."

Gray departed with runners on the corners, but Lorenzen struck out Nicholas Castellanos to end the seventh inning.

Lorenzen then worked the eighth before Iglesias pitched a perfect ninth for his 32nd save.

Darvish struck out the side in the first, but Cincinnati scored three times. Votto doubled home Josh VanMeter before Aquino hit a drive to left-center for his first home run since Sept. 2.

Aquino, who was recalled from the minors on Aug. 1, has six home runs against Chicago in six games.

"I made a good pitch to Votto, but he's a great hitter," Darvish said. "For Aquino, that's my mistake. I should throw a breaking ball."

Gray helped himself in the fifth, reaching on a one-out single and eventually coming around on Suarez's base hit to give Cincinnati a 4-2 lead.

All-Star catcher Willson Contreras started at first base in Chicago's second game since Anthony Rizzo sprained his right ankle during Sunday's 16-6 victory over Pittsburgh. Rizzo is wearing a walking boot for five to seven days, casting doubt on the slugger's availability for the rest of the season.

Schwarber drove in Castellanos with a double in the first and a triple in the third.