ARKANSAS HIGH SCHOOL FOOTBALL: Hornets up to task early on 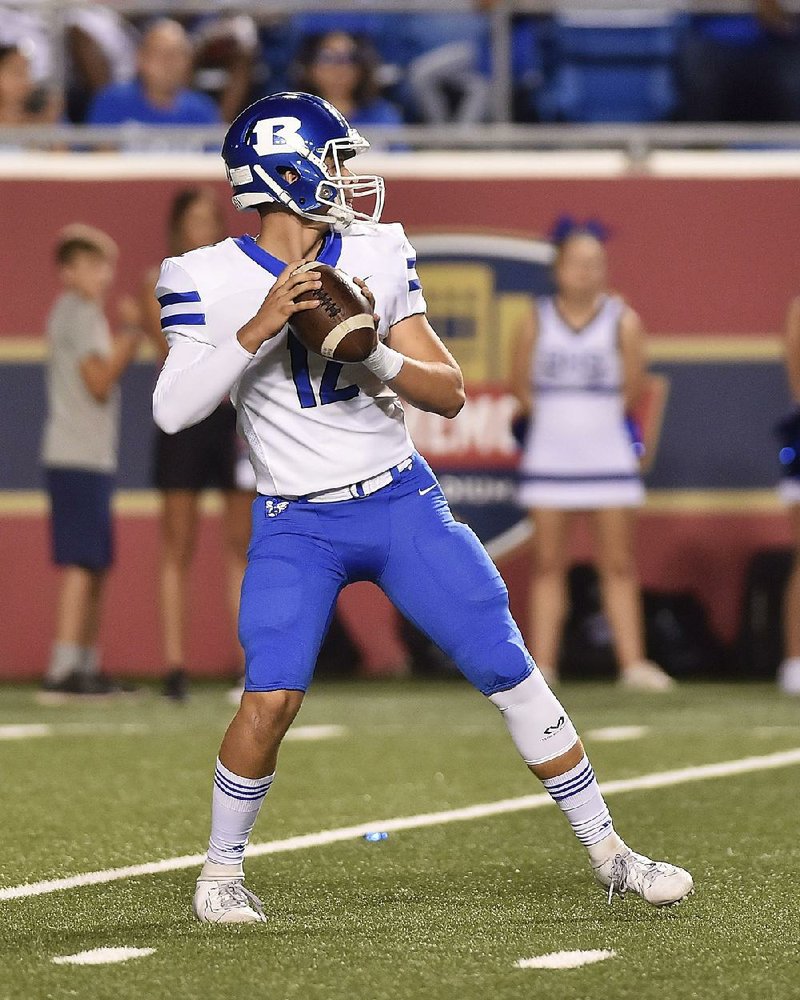 Bryant quarterback Austin Ledbetter has led the Hornets to a 2-0 record this season. The defending Class 7A champions will travel to Fayetteville on Friday to face the Bulldogs.

Through its first two games, Bryant hasn't had a state-championship hangover.

The Hornets posted victories against Class 6A state runner-up and Saline County rival Benton in the Salt Bowl, 42-14, on Aug. 30, and Class 7A state semifinalist Bentonville West 38-0 last Friday.

Bryant Coach Buck James is pleased with how the Hornets have looked in nonconference play so far.

"We've played hard. We've played well," James said. "I think we've played as well in the first two games as any of the teams I've coached.

"They've been smart about what they're supposed to do. These guys have done one heck of a job getting ready to play."

In the offseason and leading up to their first game, James told the Hornets that they'll have a target on their back since they're the defending Class 7A state champions.

So far, the Hornets have responded well to their coach's message.

"Our kids understand the process and what it takes," James said.

The Hornets will get their first true road game Friday as they head to Fayetteville to face a Bulldogs team they're familiar with in the James tenure at Bryant since 2016.

Bryant is 3-2 against Fayetteville since 2016, but is 1-2 in the regular season. The Bulldogs topped the Hornets 36-35 at Bryant last season before the Hornets won in the Class 7A quarterfinals, also at home, 28-25.

Under first-year coach and former University of Arkansas quarterback Casey Dick, Fayetteville has been led by senior Connor Flannigan. Flannigan has caught 13 passes for 220 yards and 2 touchdowns this season.

player of the week

Gunn completed 17 of 24 passes for 348 yards and 4 touchdowns in a 42-25 victory over the Mounties in Rogers. He threw two touchdown passes to Antoine Westbrook, who finished with 9 receptions for 167 yards.

The Tigers scored 21 points in the second quarter. Gunn threw two touchdown passes in that quarter to give Central a 21-10 halftime lead.

Gunn will be honored at the Little Rock Touchdown Club on Monday. University of Arkansas Athletic Director Hunter Yurachek will be the guest speaker.

Central (3-0) is off this week and returns to action Sept. 27 when it hosts North Little Rock at Quigley Stadium.

"They're pretty good," James said of the Bulldogs' offense. "They're probably as good as I've seen from them at this time of the year."

"He's done a great job," James said. "The offensive line has done a good job of protecting him. Our receivers have caught the ball well.

"Austin has a chance to be a really good high school quarterback before he's done here."

Bryant can go 3-0 for the first time since 2017 with a victory Friday before opening 7A-Central Conference play Sept. 27 at Fort Smith Northside.

"We have to keep playing well," James said. "We can't have a lot of turnovers. We can't break down in our kicking game. We have to run the football.

"If we don't play well, then we don't have any chance of beating them."

Defense is what's carried Jonesboro during its first three games.

Jonesboro's defense has allowed 11.3 points in three games this season. The Hurricane played Class 7A schools Little Rock Catholic and Conway and Class 5A Batesville in nonconference play, going 2-1 with a 14-7 loss at Conway on Friday.

Senior defensive end Jashaud Stewart leads the Hurricane with 24 tackles, including 7 for a loss, and 5 sacks. Stewart has orally committed to the University of Arkansas.

Hurricane Coach Randy Coleman singled out his defensive line of Stewart, seniors Jordan Flanigan (20 tackles, 4 sacks) and David Milton (9 tackles, including 7 for a loss) and junior Nate Light (one forced fumble) for their play so far.

"Our defense has played really well all year," Coleman said. "Up front, our defensive line is really, really good. Those guys get some pressure upfront."

Jonesboro is off this week and will face Mountain Home on Sept. 27 at Cooksey-Johns Field in Jonesboro in its 6A-East Conference opener.

"We've got a lot to build on," Coleman said. "A lot of stuff we did, we can correct. The open week is coming at a good time."

Jacksonville Athletic Director Scott Waymire told the Arkansas Democrat-Gazette on Wednesday that the school's new football stadium will not be ready for its 6A-East Conference opener Sept. 27 against Searcy.

The Titans have three home games remaining after the Searcy game -- Oct. 11 vs. Mountain Home, Nov. 1 vs. Marion and Nov. 7 vs. Pine Bluff.

Waymire added that the school's new indoor football facility won't be ready until the beginning of the spring semester in January.

Marvell's 19-game losing streak, which was the longest in the state after Corning snapped its 42-game drought Sept. 6 against Rector, is over. The Mustangs defeated Palestine-Wheatley 20-8 on Friday night in Marvell. Marvell's last victory before Friday night was Nov. 4, 2016, against Brinkley, a 42-20 triumph. With Marvell's streak ending, the state's longest losing streak now belongs to Rogers Heritage, which has lost 16 consecutive dating to the beginning of the 2018 season. ... Forrest City is off to a 2-0 start thanks to the play of senior running back Kadarius Akins. Akins rushed for 213 yards and 4 touchdowns on 20 carries in the Mustangs' 42-14 victory over Pine Bluff Dollarway on Friday night. He has rushed for 499 yards and 7 touchdowns on 40 carries in Forrest City's first two games. The Mustangs travel to Helena-West Helena on Friday. ... Chris Gunter earned his first victory as Beebe's head coach as the Badgers won at Lonoke 45-44 in overtime Friday night. Senior quarterback Cade Longing scored on a seven-yard run in overtime and he threw a two-point conversion pass to junior tight end Seth Howard to give the Badgers the victory. Longing threw two touchdown passes and had a rushing score for Beebe. Gunter, a Beebe graduate and former assistant coach at Alma, was hired in February and replaced John Shannon.