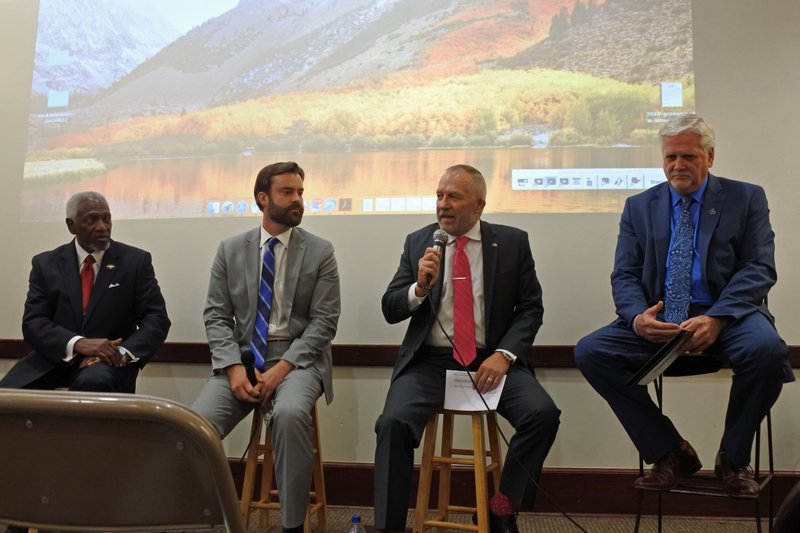 FORT SMITH -- Four mayors shared their thoughts on how they could team up to benefit the entire region in which they live.

The mayors of Fort Smith, Van Buren, Alma and Greenwood answered questions about collaborating with one another during a gathering on Thursday. The panel was part of a larger event titled "Invest Fort Smith" that was hosted by the Fort Smith nonprofit organization 64.6 Downtown.

One question the mayors were asked by panel moderator Crystal Lougin was how they saw themselves working together for the benefit of the western region of the state. Alma Mayor Jerry Martin said working together starts with the cities communicating and embracing their diversity. From there, they will go on to connect, celebrate each other's victories and grow together as a region, in that order.

"This is what other parts of the state have figured out a long time ago, and we now finally have leadership here in our region that not only understands that, but embraces that, and it's not just the four guys sitting up here either," Martin said.

Martin went on to say other mayors in the region are starting to understand and embrace the idea that they need to work together.

In response to the same question, Fort Smith Mayor George McGill said although the mayors collaborate a great deal as it is, Fort Smith is exploring the idea of creating a fishery that would benefit the entire region by attracting fishermen.

"Our water supply, Lake Fort Smith, we believe has the capacity to produce water cold enough to create a fishery, which would benefit Mountainburg, Van Buren," McGill said.

Another question Lougin asked was what the mayors considered to be strong and weak points in the western region, and how they might tout their strengths while also addressing the weak spots.

Van Buren Mayor Joe Hurst said his city is trying to figure out its identity. Van Buren is currently in the midst of going from a city of about 17,000 people, which was the case when he was younger, to one "hopefully" approaching closer to 25,000 people in the upcoming U.S. census.

However, Hurst later said Van Buren trying to determine its identity, including for what it wants to be known, is actually a positive. The city is engaging its community, which has opinions to offer on the subject.

Greenwood Mayor Doug Kinslow said one problem he sees in the region is young people leaving to live somewhere else.

He noted Fort Smith is doing "an amazing job" of trying to keep young people, citing the opening of the Arkansas College of Osteopathic Medicine there in 2017 as an example.