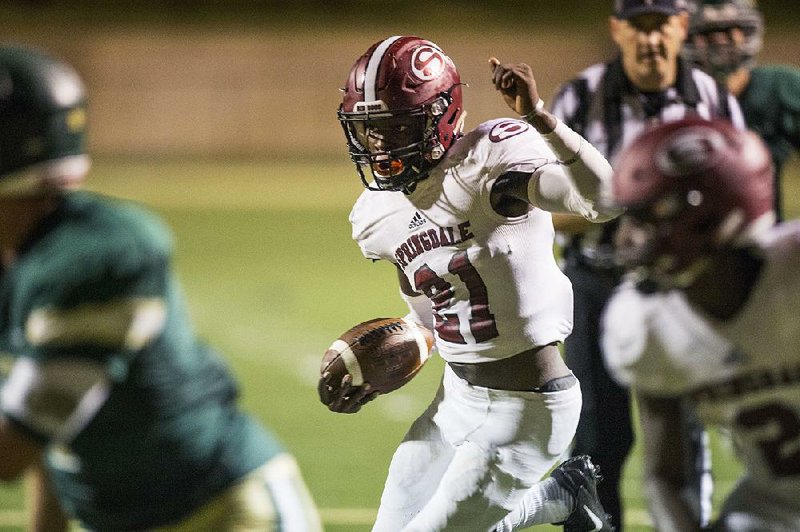 After spending the previous summer in Atlanta, Wonsley was put on the junior varsity team where he was a Monday night star with Friday night aspirations. A year later, the 6-foot, 175-pound junior speedster is in the spotlight and making the most of it.

In three games, Wonsley is on pace to put up big numbers. Heading into the Bulldogs' open week, he leads the 7A-West Conference in receptions with 31, receiving yards with 386 and in receiving touchdowns with 6.

"I'm ready to take responsibility and be a leader on this team," Wonsley said. "I just have to continue to show it."

Springdale coach Zak Clark said Wonsley sometimes battled with off-the-field issues as a sophomore, which played a big part in why he was not a varsity contributor.

"Ladarius did not play on the varsity last season, and it wasn't a talent deal," Clark said. "His maturity level and care factor just were not there yet. I get an email or a teacher will stop me in the hall almost daily and tell me how good Ladarius is doing, and believe me, that did not happen last year.

"I'm really proud of his growth and development off the field, and there's no question that has translated into what he's done on the field."

Wonsley's fast start has brought up the inevitable comparison to former Red'Dog receiver Kyler Williams, whose senior season was cut tragically short when he was killed in an automobile accident in 2016.

Conner Hutchins, Springdale's senior quarterback has developed a bond with Wonsley as both are first-year starters. Over the spring and through summer team camps and 7on7 events, Wonsley quickly emerged as Hutchins' go-to receiver.

That was certainly the case in Week 2 when Springdale hosted Little Rock Parkview in the home opener at Jarrell Williams Bulldog Stadium. Hutchins and Wonsley connected on 15 passes that night in the Bulldogs 24-21 come-from-behind win in the final four minutes.

Wonsley was huge down the stretch as his receiving helped open the running lanes for Gilberto Dominguez, who had more than 100 yards. Trailing 21-16, Hutchins hit Wonsley near the goal line to set up Dominguez's short touchdown run to give the Bulldogs the lead.

"I was in," Wonsley said then laughed. "I actually scored on that play, but that's OK. We scored and got the dub, and that's all that matters. I was really proud of our defense. They're the ones that did all the work. We were happy to get the win for our team and for our school."

This week, Springdale will enjoy its open week before opening 7A-West play against Rogers Heritage next week.

For Wonsley, finally getting a chance to play on Friday nights has been everything he thought it would be. As a sign of that growing maturity, he's also wanting his teammates to share in the success.

"I've been playing out wide, but I'm hoping to play more slot and be able to move around the field more to open it up for everybody," he said.

A year older, another year of maturity and using just a third of the season as a measuring stick, Wonsley is proving that the wait was worth it.

NOTABLE First year on the varsity team after playing on the junior varsity last season … Caught 15 passes against Little Rock Parkview in a 24-21 come-from-behind win. … In three games, leads the 7A-West Conference in receptions (31), yardage (386) and touchdowns (6). … Also plays in the Springdale boys basketball team.

For more on Ladarius Wonsley, see the video at nwaonline.com/videos. 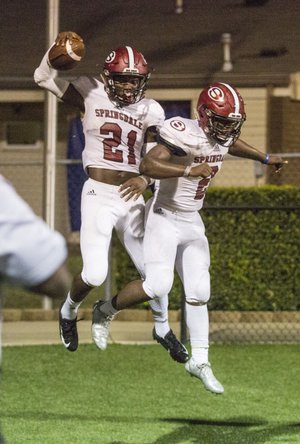 NWA Democrat-Gazette/BEN GOFF @NWABENGOFF Ladarius Wonsley (left), Springdale wide receiver, and Darrell Parchman, celebrate after Wonsley scored a touchdown vs Alma Friday, Sept. 13, 2019, at Airedale Stadium in Alma. Wonsley has emerged as one of the top receivers in the 7A-West with 31 catches and 6 touchdowns in three games this season. The Bulldogs are idle this week.