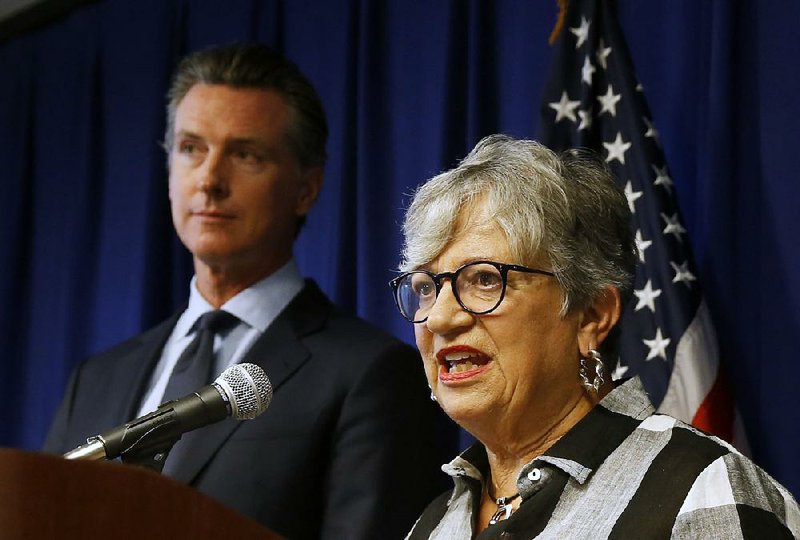 California Gov. Gavin Newsom and state Air Resources Board Chairman Mary Nichols talk earlier this week about the federal government’s plan to revoke the state’s authority over vehicle-emissions standards. After filing suit Friday, Nichols said, “This is the fight of a lifetime for us.”

California on Friday filed suit against the reversal by President Donald Trump's administration of the state's authority to set its own rules on tailpipe emissions.

In a lawsuit filed Friday in Washington, California Attorney General Xavier Becerra and Gov. Gavin Newsom, both Democrats, made good on their pledges to fight Trump's decision, which Trump said would cut environmental regulations and make cars cheaper. A coalition of 22 other states joined the suit, including several coastal ones that previously agreed to join in holding automakers to California's standards.

California is asking the U.S. District Court for the District of Columbia to prevent Trump from stripping the state of its power to set limits on auto emissions that are stricter than those of the national government.

"This is the fight of a lifetime for us," said Mary Nichols, chairman of the California Air Resources Board. "I believe we will win."

"Two courts have already upheld California's emissions standards, rejecting the argument the Trump administration resurrects to justify its misguided pre-emption rule," Becerra said in a statement announcing the suit. "Yet, the administration insists on attacking the authority of California and other states to tackle air pollution and protect public health."

Trump announced Wednesday via Twitter his intent to revoke California's ability to set emission standards. A day later, U.S. Environmental Protection Agency Administrator Andrew Wheeler revealed the policy at a news conference during which he also chided the state for its poor air quality.

In its new policy, the administration asserted that the U.S. Department of Transportation's authority to set fuel-economy standards for cars and trucks pre-empts California's ability to dictate tailpipe-emissions standards for greenhouse gases, even as the EPA has a nearly unbroken 50-year history of granting permission for the state to do just that.

While the state was first granted authority to better combat its endemic urban smog problems in 1967, California remains home to seven of the 10 American cities with the worst air quality.

"California has the worst air quality in the United States," Wheeler said Thursday.

Should the case reach the Supreme Court while Trump remains in office -- a Democratic administration would be unlikely to defend the policy in court -- administration officials say they are confident they will win. Legal experts say that view may have merit.

The Transportation Department and the EPA will jointly revoke a legal waiver, granted to California by the administration of President Barack Obama under the authority of the 1970 Clean Air Act, allowing the state to set tighter state standards for greenhouse-gas emissions from vehicle tailpipes. The EPA said this week that the federal Clean Air Act prohibited both programs. The waiver withdrawal will take effect starting in the 2021 automotive model year.

The suing states contend the administration action is arbitrary and capricious, willfully misreading the federal Energy Policy and Conservation Act as pre-empting state emission standards. They also say it defies the National Environmental Policy Act by failing to assess the impact of the administration's action upon the environment and public health.

On Sept. 19, the California Air Resources Board approved the state's plans to set its own standards with carmakers Ford Motor Co., Volkswagen AG, Honda Motor Co. and BMW AG.

U.S. Secretary of Transportation Elaine Chao, who is named as a defendant in the state's suit, said the administration's action would ensure that there would be just one set of national fuel economy standards, "as Congress mandated and intended."

"No state has the authority to opt out of the nation's rules and no state has a right to impose its policies on everybody else in our whole country," she said.

The lawsuit is the 60th filed against the Trump administration by the state of California, according to its attorney general's office.

Information for this article was contributed by Andrew Harris, Ryan Beene and Jennifer A. Dlouhy of Bloomberg News; and by Coral Davenport of The New York Times.