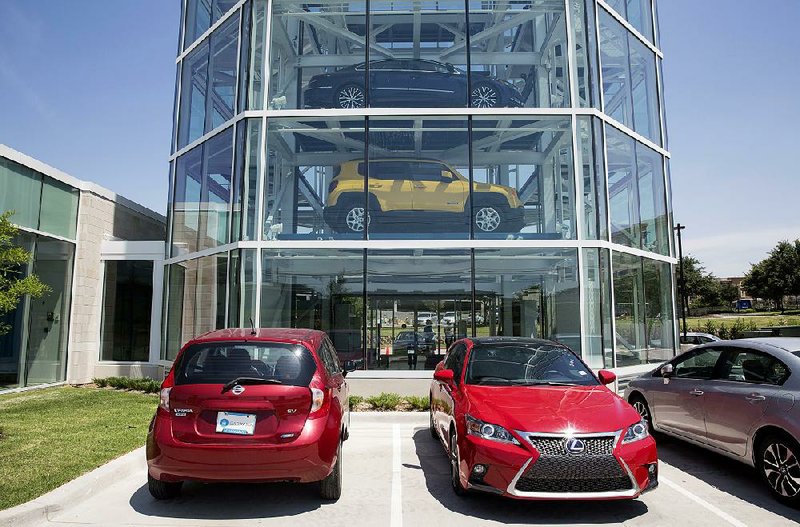 Vehicles sit parked outside the Carvana Co. car vending machine in Frisco, Texas, in the summer of 2017.

Carvana, an online used- car retailer known for its elevator-like car vending machines, says it will build a $40 million inspection and distribution center in West Memphis, creating more than 400 jobs in the coming years.

Carvana's online platform allows car buyers to select, finance and purchase a used vehicle, trade in their old one and schedule a delivery. Buyers can also pick up a vehicle at one of its 21 car-vending locations. Purchases through the Tempe, Ariz.-based company are available for next-day delivery in 141 markets in the United States.

"Carvana is an upstart company that is changing the used-car industry through technology and great customer service," Gov. Asa Hutchinson said Friday in an Arkansas Economic Development Commission news release. "That's just the sort of business model we have sought in our recruiting efforts, and we're pleased to see these high-paying jobs coming to the Delta."

A multimillion-dollar incentive package helped attract the online retailer's facility, which will be built on a 217-acre tract in the Mid America Industrial Park, which local economic development officials billed as "ideally suited for distribution and light-manufacturing/assembly facilities."

The site was marketed at $25,000 per acre. It wasn't clear Friday how much acreage Carvana would use nor when it would begin construction.

"Our city has so much to offer in the way of resources, location and workforce, and we appreciate that Carvana recognizes that and their committed investment in our community," he said in the release.

At least $900,000 will be available from the Create Rebate program, which Brandi Hinkle, the commission spokeswoman, said will provide Carvana with a cash rebate of 4.5% of payroll after it reaches a minimum of $2 million in annual payroll within 24 months.

The rebate will be available annually in two phases.

"There is no dollar limit, but they'll be eligible for five years to claim the rebate for phase I, and five years for phase II," she said in an email.

The other incentive available for Carvana is Tax Back, which provides sales and use tax refunds on the purchase of building materials and taxable machinery and equipment.

"That will allow us to showcase the city and state in a way that will put Arkansas on the forefront of even more opportunities," he said in a news release.

The facility will be used to certify used vehicles for sale through the company website. Carvana Certified vehicles must undergo a 150-point inspection, have no reported accidents and have no frame damage.

The company bills itself as The New Way to Buy a Car.

"Carvana has been growing extremely rapidly over the last several years and we are working to bring The New Way to Buy a Car to even more customers all the time," Benjamin Morens, infrastructure development and operations director for the company, said in the release. "As part of our efforts to scale the business, we're looking forward to working with West Memphis and the state of Arkansas to open a vehicle inspection and reconditioning center, and become a member of the West Memphis community."