54 House members in favor of expulsion of Arkansas representative 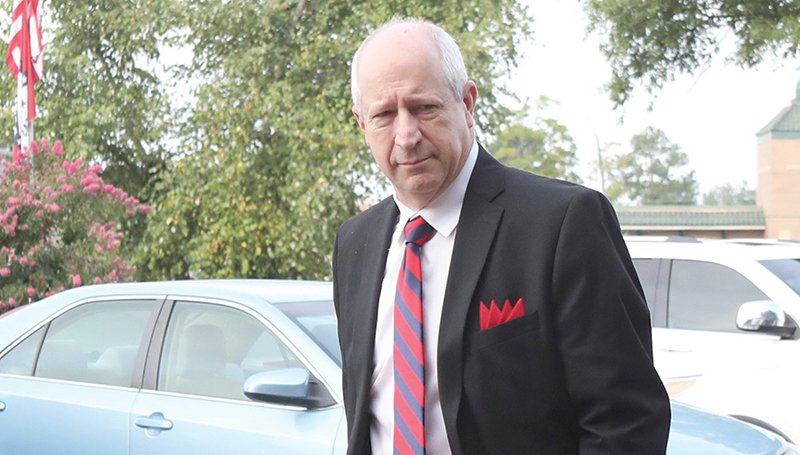 State Rep. Mickey Gates, R-Hot Springs, has rebuffed calls from party leadership to resign after pleading no contest in July to failure to pay state income taxes. (The Sentinel-Record/Richard Rasmussen)

A majority of Arkansas' representatives plan to vote to expel Rep. Mickey Gates from the state House of Representatives next month, they said in interviews last week.

While 54 members told the Arkansas Democrat-Gazette that they support removing Gates, Speaker Matthew Shepherd, R-El Dorado, will need at least 13 additional votes on Oct. 11 to reach the 67-vote threshold required to boot a member of the House.

In response to a poll from this newspaper, 33 representatives said they were undecided about Shepherd's resolution; two declined to say how they would vote; and nine didn't respond to inquiries last week. Only one member -- Gates -- said that he plans to vote against Shepherd's resolution. (The total adds up to 99 because the 100-seat House has a vacancy that will be filled in November.)

In a Friday interview, Shepherd said the vote count didn't figure into his decision to file the expulsion resolution as it typically would on other legislative action.

"I haven't polled this," Shepherd said. "As far as my decision-making goes, I know there's been speculation about, 'Does he know what his numbers are? Does he know what the lay of the land is?' In probably most instances, if we were talking about a particular bill or a piece of legislation, that might be something that I would be looking at on the front end.

"But when it came to this decision, I made this decision based on the advice and counsel that I received. I visited with a few members, but I wasn't polling members to try and determine what are the numbers because I believe this is a matter where in my view this is really my duty as the speaker."

Gates, a Republican from Hot Springs, began facing calls to resign from the state's highest-ranking officials in 2018 after he was arrested on six felony charges alleging that he failed to pay state income taxes from 2012-17. Gates initially pleaded innocent, but he changed the plea in July to "no contest" to the 2012 charge and agreed to pay $74,789 in taxes, penalties and interest.

Shepherd didn't publicly call for Gates' resignation until after the no-contest plea. Gates refused to resign, and Shepherd filed the expulsion resolution -- Resolution 1079 -- on Sept. 13.

The House, which has been out of session since finishing legislative duties in April, will convene for a one-day caucus of the whole Oct. 11 for the sole purpose of determining Gates' future in the body. It would be the first time since the 1800s that a representative has been kicked out of the House.

Gates said last week that he hasn't been reaching out to members to ask them to vote against the speaker's resolution, and he said that he would run for re-election even if expelled. The Arkansas Constitution's Article 5, Section 12, bars the Legislature from expelling a member twice for the same reason.

However, Act 894, enacted by the General Assembly earlier this year, with Gates' support, precludes a person who has been convicted or pleaded guilty or no contest to a "public-trust crime" from running for a state constitutional office. Gates' attorney has argued that law is unconstitutional because it adds to the constitutional qualifications for a candidate for public office, and he has hinted at a lawsuit if Gates is barred from seeking office next year.

The vote on the resolution will come in the month before the party filing period for the 2020 elections, but Shepherd said the timing of the resolution had nothing to do with the filing period. Filing will be Nov. 4-12; the party primaries are March 3 and the general election is Nov. 3, 2020.

Gates was re-elected to a two-year term in November after refusing to drop out of the race. He said he plans to defend himself from the House floor on Oct. 11.

"If I thought I should be removed, I would've already stepped down," Gates said. "My district, which is comprised of 30,000 people, re-elected me overwhelmingly, and that was after my arrest."

There was a common refrain among House members who said they plan to support Shepherd's resolution and those who are undecided: They wish Gates would resign.

"I like Mickey," Rep. Karilyn Brown, R-Sherwood, said. "But he should just step down. He shouldn't put us through a process that none of us want to go through."

Rep. Jack Fortner, R-Yellville, said he would have resigned long ago if he was in Gates' position to save the "integrity of the body and the grief for my fellow legislators."

"Other than my wife and family and personal convictions, I value the integrity of this body above anything," Fortner said.

Among the 33 House members who said they were uncertain on how they will vote on the resolution next month, many said they wanted to keep open minds and hear Gates' side of the story, but many tempered their remarks like Rep. Denise Garner, D-Fayetteville.

"I'm undecided, and I want to keep an open mind," she said. "But I'll say this, I trust Speaker Shepherd, and no one is above the law."

Rep. Rick Beck, R-Center Ridge, said he's undecided and is still looking at the matter. However, he said his preference would be to revoke all of Gates' legislative privileges without expelling him and let Gates' constituents decide in next year's election whether he should remain. House District 22, where Gates serves, includes part of Garland and Saline counties.

Reps. John Payton, R-Wilburn, and Joe Jett, R-Success, said they weren't certain how they would vote, but they questioned whether the speaker's resolution was the proper way to remove Gates. Payton is one of four assistant speakers pro tempore; Jett, who has said he will challenge Shepherd for speaker next year, is chairman of the House Revenue and Taxation Committee.

Both lawmakers said they believed state law requires the Arkansas Claims Commission to make a nonbinding recommendation about the matter before the House considers it.

Jett said the House will be considering Gates' qualifications to serve in the House, and Arkansas Code Annotated 7-5-805 requires that process to begin with the Claims Commission.

"To me, we are circumventing a step in the process," Jett said. "I can read state statute. It's black and white."

Under Arkansas Code Annotated 7-5-805 (b) (1) (A), any action to contest the eligibility, qualification or election to serve as a member of the House of Representatives "shall be initiated by filing a complaint with the Arkansas State Claims Commission."

Payton said the Claims Commission process would be helpful because it would provide a forum for both the Arkansas Department of Finance and Administration and Gates to make their respective cases. Payton said he would like to hear from both parties before making a decision on whether Gates should be expelled.

"Right now, we only have one side of the story," Payton said.

But Shepherd, who is an attorney, said that law didn't apply to this situation. The constitution, he noted, gives the Legislature the sole authority to expel members. He said both House and Bureau of Legislative Research legal experts reviewed the law that Payton and Jett noted, but the experts determined that a House resolution was the proper way to proceed.

The finance department told authorities that Gates didn't file tax returns from 2003-17, and he owed $259,841 in taxes, penalties and interest as of June 2018, according to court documents.

Special prosecutor Jack McQuary charged Gates in connection with only the six most recent years because the statute of limitations had expired on filing charges for infractions in previous years.

As part of the plea deal, prosecutors dropped five of the six charges against Gates. He also was permitted to plead under a first-time offenders law that will allow Gates to avoid a finding of guilt if he satisfies the conditions of his six-year probation term, including paying the more than $74,000 in back taxes and filing tax returns for 2015-17.

"Gates' plea agreement is unbecoming of a member of the House of Representatives, and is punishable by this body," Shepherd's resolution reads in part.

Since the plea deal, Gates' defense has been twofold. He has argued that he has not been found guilty of anything, and he therefore shouldn't be punished as if he has. Additionally, he said last week that the Department of Finance and Administration treated him unfairly, noting that it opposed legislation he filed that would limit the agencies ability to audit taxpayers beyond seven years into the past.

A spokesman for the finance department declined last week to comment on Gates' remarks.

Gates' tax issues came at time when the Legislature has been grappling with several ethics scandals and federal corruption investigations that ensnared six former state lawmakers. Two of the legislators resigned when they were charged.

The last time a member was expelled from the House was in 1837. Speaker John Wilson was removed after he stabbed another member to death during a debate on the House floor, but that incident predated the current constitution of 1874.

Rep. Laurie Rushing, R-Hot Springs, represents a district that neighbors Gates' district and includes a portion of Garland County. She said that Gates' constituents remain happy with his work, but she will vote for Shepherd's resolution because she doesn't feel like there's much of a choice.

"I'm going to vote for it because that's what the law says," Rushing said. "It's pretty black and white." 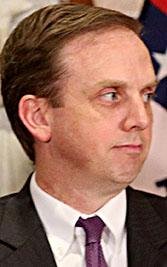 Photo by Thomas Metthe
Arkansas Speaker of the HouseMatthew Shepherd, R-El Dorado, is shown in this photo. 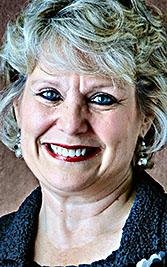 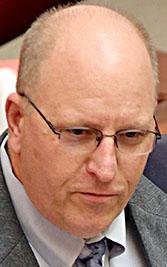 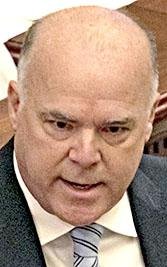