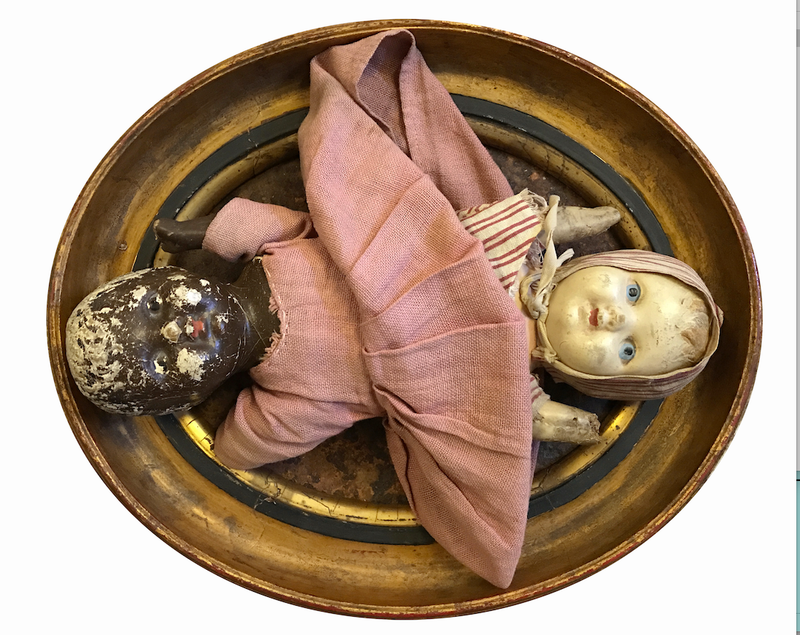 The innocence of children is the inspiration for "Absence of Complication." The mixed media work, artist V.L. Cox says, represents “how they see each other as equals until they are taught otherwise.” Courtesy V.L. Cox

Arkansas artist V.L. Cox's powerful exhibition "Break Glass: A Conversation to End Hate," returns to Arkansas after stops at museums in Virginia, Alabama, Washington and New York. Among the institutions hosting the exhibit were the Virginia Holocaust Museum in Richmond, Va.; the LGBT Center in New York City; and the Rosa Parks Museum in Montgomery, Ala.

The exhibit's first presentation was at New Deal Studios and Gallery in Little Rock in 2016. When it opens Friday at the Delta Cultural Center in Helena-West Helena, "Break Glass" will consist of 42 multi-media, mostly sculptural works with 27 making their first Arkansas appearance.

The exhibition is named for one of its works -- a child's tin-cans telephone inside a wood and glass case, a ball-peen hammer at its side, to be used "in case of emergency."

The timing of "Break Glass" is especially potent. The Elaine Massacre Memorial, also in Helena-West Helena, will be dedicated Sept. 29.

Cox, whose work focuses on engaging audiences in discussions about racism and discrimination, answered questions about her art by email.

Q: What is different about what we will see in Helena and what we saw in 2016?

A: The creativity seemed to keep pouring out after 2016 so I removed all boundaries and embraced the flow. When you allow yourself complete creative freedom, the work takes on a life of its own. The original "Murder of Crows" collection that debuted in 2016 consisted of 15 pieces. Thirty-three new pieces were added after that, with 31 of them available for exhibition (two were bought by a Virginia collector). If you count the eight "End Hate Doors," 53 pieces have been included in the two-year traveling museum tour. (The "End Hate Doors" are full-size wooden doors painted in various colors and labeled Colored Only, Whites Only, LGBT Only, Immigrants Only, Homeless Only, Veterans Only, Women Only, Human Beings.) 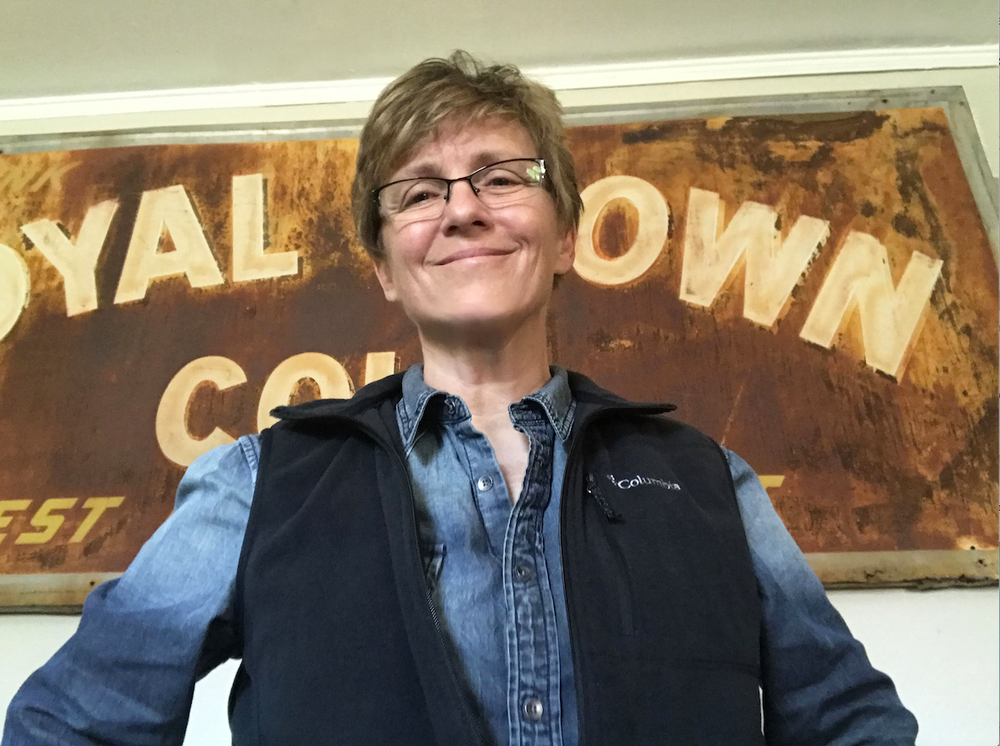 Q: What did having the "End Hate Doors" at the Lincoln Memorial in Washington in 2017 mean to you?

A: It was life-changing. The Doors went viral on the Web and are the most iconic pieces of the exhibition. It's such a simple message, and it resonated strongly with individuals in a "stop and think" moment of truth. The first time they were installed in front of the Lincoln Memorial, it was Earth Day and over 250,000 people were estimated to be there. Setting your work up in the same space where Martin Luther King made his "I Have a Dream" speech was extremely humbling. I have many stories about that experience, including:

• A young man whose grandfather was a community organizer for King ... ended up sitting with us all day. When I took a break, he escorted me to the Martin Luther King Memorial and shared a few of his grandfather's stories.

• The support I received from Honor Flight veterans (HF is a nonprofit that transports veterans to Washington D.C. see their memorials). I learned very quickly that World War II, Korean War and Vietnam War veterans take freedom for all very seriously. One elderly WWII vet walked over and stood in front of the LGBT ONLY door and said: "This is for my granddaughter Emma. I fought for her freedom too."

• A friend traveling with me tapped me on the shoulder: "I have someone who wants to meet you." I turned around and standing in front of me was the biggest skinhead I have ever seen. I noticed his white supremacist tattoos and thanks to my years of gang training when I was doing art and mural projects with incarcerated youth, I knew exactly what [the] tattoos were and exactly what they meant.

As I stood there like a statue, this giant of a man extended his hand. It took me a few seconds, then I reached out and grabbed it. He spoke in a deep, gentle voice. "I want to thank you for what you are doing," he said. "I was born into the Klan in south Georgia. My father and brother are still in the Klan there. My wife and I fled under the cover of darkness to come to D.C. because they were going to kill my son, who is transgender. I love my son and am now in the process of getting my tattoos removed and becoming a man of peace." I caught my breath, grasped his hand again and realized that if that man could change his heart ... anyone could.

This man left everything he knew because of love. He took a chance of being killed by denouncing his affiliation with a hate group, and he saved three lives in the process. I will go to my grave with his story in my heart.

• I have also learned through these Doors that loving someone while hoping for change isn't always enough. People are drawn to confidence and power like a moth to a flame and if you don't speak crystal clear with more confidence and authority than those committing an injustice, your words and actions will be lost in the winds of chaos. You have to take a stand. You have to take action. 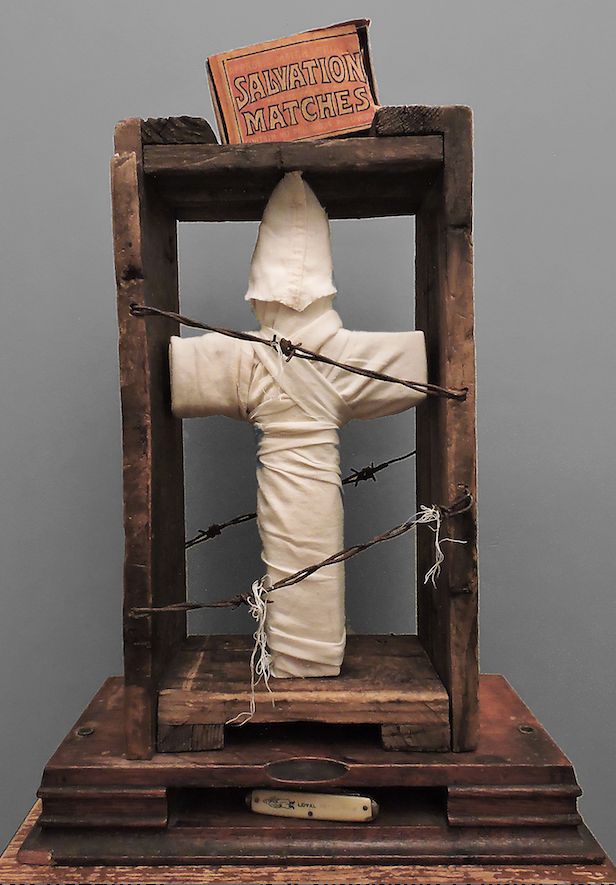 V.L. Cox was inspired by Dante’s story of “cowardly angels” as he entered hell to create her mixed media work "Let There Be Light (The Curse of Those Who Do Nothing in the Face of Evil)." Cox updated the idea to address modern-day “fence straddlers.” The Ku Klux Klan cross is wrapped with material from an authentic “flour sack” Klan robe circa 1870 from Carthage, Ark. It is one of the works in Cox’s exhibition “Break Glass: A Conversation to End Hate,” which opens Friday at the Delta Cultural Center in Helena-West Helena. (Courtesy V.L. Cox)

As a professional artist of 29 years, I have since dedicated my life to human rights and social justice issues. I have discovered ... that the use of historical images of our past in relation to current events reminds people where we have been and where we cannot allow ourselves to go again.

The arts are a powerful language, but the most important thing is that it can do something most politicians cannot do. It has the ability to reach across religious and political boundaries and spark civil conversation with a reminder that despite our beliefs or differences, discrimination or hatred on any level is cruel and completely unacceptable.

Q: What keeps you going?

A: Probably good ol' Southern grit. I've also been called stubborn. I'm pretty determined and don't give up easily once I set my mind to something. I never planned this, yet it happened and it has instilled a deep personal responsibility in me that I can't walk away from no matter how difficult it becomes. 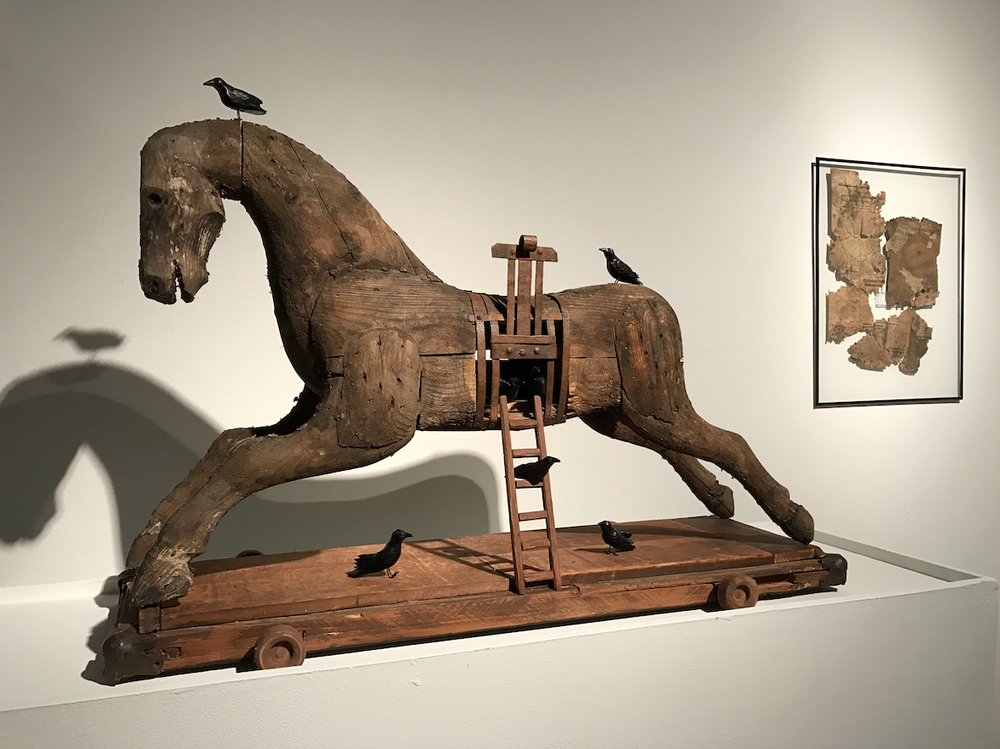 The symbolism of a Trojan horse informs V.L. Cox’s "Dark Horse." The mixed media work includes a carved horse from 1942. It is part of “Break Glass: A Conversation to End Hate,” which opens Friday at the Delta Cultural Center in Helena-West Helena. (Courtesy V.L. Cox)

Q: What inspires you?

A: It's the positive reaction to the work and encouragement from so many people that "get it." It's the negative stories in the media that challenge me and remind me that there is still a lot of work to do.

It's the simple things and the hard lessons from the past that have been forgotten that need to be remembered.

I'm also inspired by my fellow artists and activists. I don't think any of them planned to take this path, yet here we are. There is a great deal of emotional and financial sacrifice that's involved. We understand this and support each other when times get tough. Many of us now are not only friends for life but family.

Q: When did this sense of social awareness arise within you?

A: I've always had a strong sense of justice, but it was HB1228 that opened my eyes (the bill sparked debate over the legal rights and protections for lesbian, gay, bisexual and transgender Arkansans; the governor signed a Senate version which became the religious freedom law Act 975 in 2015).

I was absolutely horrified that in this day and age I could be denied a sandwich in a restaurant or lifesaving medical care due to some cruel, discriminatory archaic bill. Unfortunately, every generation has to fight for their rights or they will lose them because there will always be someone there to try to take them away.

Q: What is the power of art and how it can affect people?

A: The power of the arts can do anything. Why do you think it's the first thing banned in a cruel government or dictatorship?

Books, music, the visual arts, drama, etc., these are some of the first things archaeologists search for when excavating an ancient civilization. Arts are the fabric of our culture, the expression of things we believe in, how we feel and our actions. It documents the stories of our brief existence. It connects us, encourages discussion and conveys a message when words fail.

Q: What is your favorite work to date?

A: The "End Hate Doors." They have traveled over 100,000 miles. I feel very connected to them. It's such a simple message and it's where it all began. A documentary is being created on the doors and exhibition.

A: I am hoping to break [the exhibition] down in smaller groups so it will be easier to manage. (It takes a 26-foot moving truck at this point to transport.) I am in conversation with institutions in New York, Richmond and Chicago. 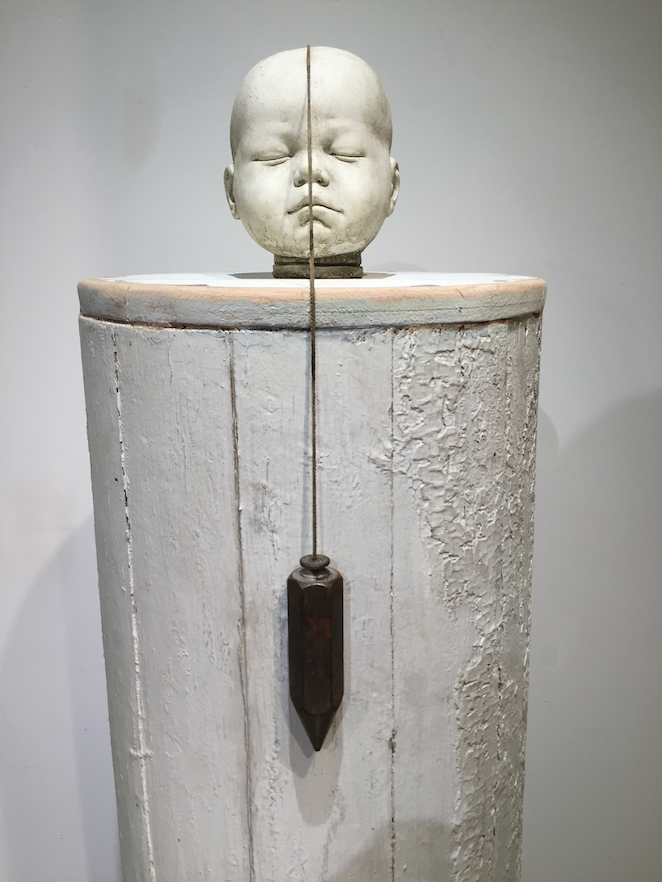 Rudyard Kipling’s 1922 poem “Before a Midnight Breaks in Storm” inspired artist V.L. Cox’s mixed media creation. Kipling’s poem, Cox says, spoke to the author's personal anxieties and frustration with those in power to acknowledge the threat from Germany and their imperial ambitions. (Courtesy V.L. Cox)

Q: How has this work changed you?

A: I see the world differently. First, I realize and acknowledge my privilege. Horrible things have happened to people in the past because they were poor, a different gender or their skin color was darker than mine. It was wrong then, and it's wrong now.

Second, I realize discrimination is like a virus. Once unleashed, it cannot be controlled and will continue to spread.

Third, if there was any innocence left in this full-grown woman, it's now gone. The harsh reality of how people cruelly treat others for nothing more than power and financial gain has set in.

Despite this, I remain hopeful. I have met some of the most amazing people on this journey. Black, white, LGBTQ, Hispanic, Asian, straight, Muslim, Christian, Jewish, Hindu, atheist, rich, poor, young, old. Not only did they warmly embrace me and my work, they were kind, strong, truly cared about others' well-being and extended help to others despite their differences.

What you see on television and hear from the media isn't the complete story about who we are as a nation or world. Not even close, yet you're never going to know this unless you find the courage to walk out of your comfort zone and not be afraid to meet people different than you. The results are beyond rewarding.