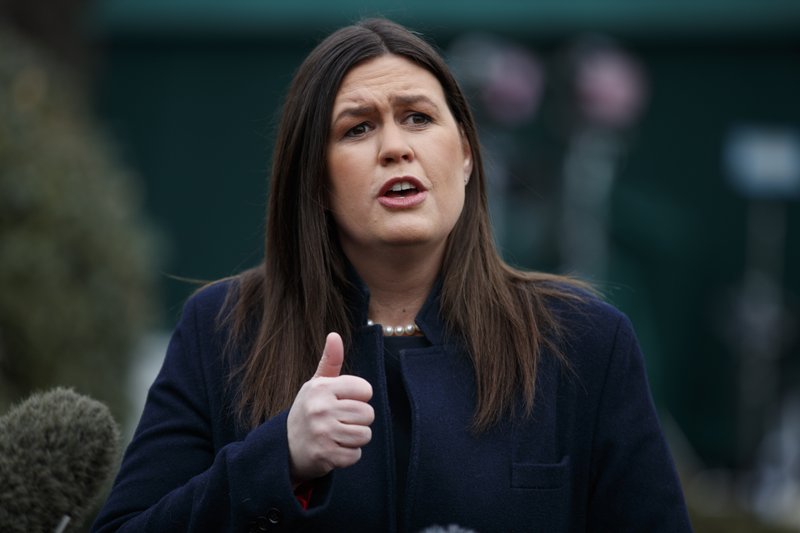 Sarah Huckabee Sanders' in-demand status as a speaker and former White House official does not mean she'll be unaffordable for talks in her home state, Republicans say.

Sanders, who left her job as President Donald Trump's press secretary in June to return to Arkansas, will appear at party fundraisers in Benton, Garland, Sebastian, Desha and Pope counties in the coming months.

She's volunteering her time to help local Republican groups as they gear up for the 2020 elections, officials said.

He expects a big crowd for the organization's Lincoln-Reagan dinner, which is being held Nov. 11.

"With her time and experience in the White House, a lot of people are just excited to hear her take on what it was like," Brownell said. "I'm sure she'll be sharing what she can about that whole experience."

Sanders has been urged by President Donald Trump to run for Arkansas governor in 2022, but she hasn't announced her plans.

"I hope she decides to run for Governor of Arkansas -- she would be fantastic," Trump said via Twitter.

In recent weeks, she signed on as a Fox News contributor.

She also inked a book deal with St. Martin's Press. Her memoir, focusing on her White House service, is set to be released in the fall of 2020.

In addition, she's signed on with Premiere Speakers Bureau, an event planning company based in the Nashville, Tenn., area. She is listed on the company's website, alongside other famous speakers such as retired football player Michael Strahan, Fox News host Sean Hannity and astronaut Buzz Aldrin.

Her speaking fees place her in the planning company's top category: $40,001 and above.

Republican organizers who go through Premiere may experience sticker shock.

According to two county GOP chairs who had interest in booking Sanders for speaking engagements, the price they were quoted by Premiere was $55,000.

"When I heard $55,000, I knew it wasn't something we'd do," said Pope County Republican Committee Chairman Bill Sparks.

After reaching out to Premiere on Monday, however, Sparks said he was contacted by a person unaffiliated with the company who offered to get Sanders to speak in Pope County for free, he said. Sparks declined to say who reached out to him, or if that person worked for Sanders.

"She'll speak for free on some things," Sparks said he was told.

In nearby Johnson County, GOP Chairwoman Katie Howard said she was quoted the same price by Premiere while she was looking up possible speakers for her organization's annual Lincoln Day Dinner next spring. "We definitely couldn't afford that," she said.

"Sarah Sanders' agreement with our bureau permits her to speak without fee in her home state of Arkansas, and she is currently confirmed to speak and raise money for several Arkansas Republican events for no fee," he said. "Our bureau takes full responsibility for any miscommunication."

Sanders, who was traveling to Michigan to give the keynote address at the Mackinac Republican Leadership Conference, could not be reached for comment Friday afternoon.

The former press secretary's return to Arkansas has been welcomed by rank-and-file activists, according to Republican Party of Arkansas spokesman Stephen Houserman.

"Our constituents, on our social media platforms, they were very happy to see that she was coming back to Arkansas," he said.

With Trump up for re-election in 2020, there will "absolutely" be audiences eager to hear from her, he said.

"She would be an A-list celebrity among Arkansas Republican county committees," he added.

Details of the Pope County event were still being finalized, chairman Sparks said.

Republican National Committeewoman Jonelle Fulmer, who lives in Fort Smith, said the Sebastian County appearance has been in the works for months.

"The minute I found out she had left the White House, the minute that was announced, I sent her a text and said, 'No. You can't leave my President. But if you're going to, would you please speak to Sebastian County Republican Women?'" Fulmer said.

Sanders was a natural pick to appear at the dinner, the group's largest annual fundraiser, Fulmer said.

"For our speakers, we try to highlight strong Republican women," Fulmer said. "Since she was now available, we figured this was the time to jump on that."

Having Sanders as the keynote speaker should help with next year's turnout, she said. "It's going to be a big draw," Fulmer predicted.

Other politicians named as potential Republican gubernatorial candidates -- Lt. Gov. Tim Griffin, Senate President Pro Tempore Jim Hendren of Sulphur Springs and Attorney General Leslie Rutledge -- are engaged in their own speaking circuits around the state. None said they are taking fees for those talks.

"In a typical month, I do dozens of events," Griffin said Friday. "I would think a small percentage are GOP events."

Hendren said he speaks to about one or two Republican groups each month. His next speech, he said, is planned in the coming weeks in Baxter County. A spokeswoman for Rutledge said the attorney general is scheduled to speak to Republican groups in four counties over the coming months, as well as a host of non-political groups.