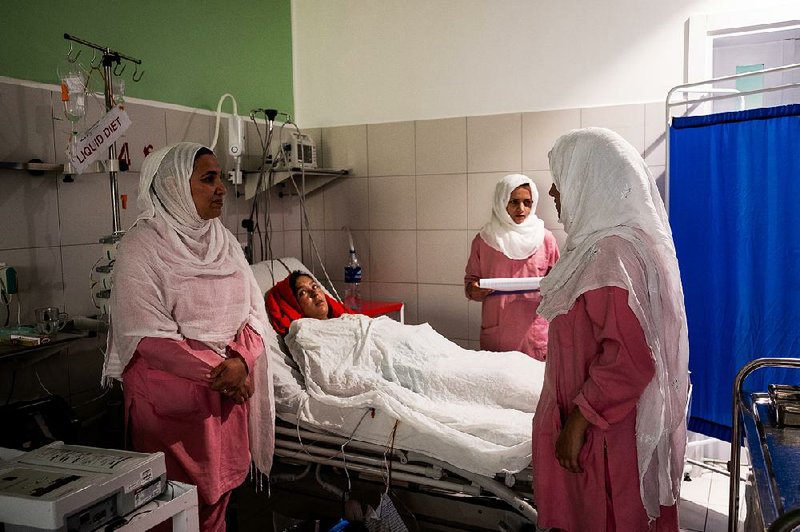 Maternity team leader Maria Salehi (left) and others tend to a patient at the Anabah center in July. “We’ve sort of become famous” among Afghan women, Salehi said.

ANABAH, Afghanistan -- He was a few minutes old; a fussy, wriggling baby in a heated bassinet. He let out a squawk when a neonatal nurse plunged a vitamin K injection into his thigh.

The 6-pound boy -- the nurses called him Aqila, his mother's name -- was the 20th baby delivered over the course of 24 hours at the Anabah Maternity Center, perched on a rocky hillside in the Panjshir Valley in northern Afghanistan.

In a country with one of the world's worst health care systems, the center provides safe, modern care to thousands of Afghan women. More than 7,500 babies were delivered there last year -- at least 600 every month.

The center, guided by a mostly female 14-member international team, is staffed by Afghan women -- from pediatricians, nurses and midwives to cleaners and assistants. Few men in Afghanistan's harsh, patriarchal society will allow their wives or daughters to be examined by a male doctor.

And in a country where people die every day from suicide bombers or roadside bombs, a new life begins almost every hour inside the center's sunlit wards.

Women, most of them poor, travel for miles over rough roads through treacherous territory to give birth at the center. Many have abandoned government or private clinics, where patients often have to pay up front or provide their own medicine and food.

Others are drawn by the free care and open-door policy of the center, run by Italian charity Emergency. And many say they prefer to be treated by women.

Eman Youszai, 26, pregnant with her first child, had been driven three hours to the center. Lying on a bed in an observation room, she said she had left a maternity hospital in Kabul, the capital, because "no one takes care of you there even if you die."

She added, "This is my first child, and I can't take a risk."

Gullalia, 20, who goes by one name, said she had lost two babies late in pregnancy. Now eight months pregnant, she said the treatment she received at a Kabul hospital didn't stop her bleeding after her water broke.

A doctor suggested the Anabah center, where doctors stopped the bleeding. Gullalia, who also traveled three hours to be there, said she planned to have her baby at the center.

"The doctors here take every patient seriously," Gullalia said inside a maternity ward. "The baby's life and the mother's life matter to them."

Panjshir province, an anti-Taliban stronghold, is one of the safest regions in Afghanistan. But many women from outside Panjshir must thread their way through war zones for treatment. The center is one of just a handful of free, high-quality maternity hospitals in Afghanistan.

Forty percent of Anabah patients in a recent Emergency survey said lack of security was the main obstacle to getting quality health care. Seventy percent said high-quality care at the center was the main reason they chose the hospital. Many patients tell other women about the hospital.

"We've sort of become famous" among Afghan women, said Maria Salehi, 42, a maternity team leader who joined the staff after arriving in Panjshir with her family in 1999 while fleeing fighting.

The all-female staff is central to the hospital's identity in a country where men dictate women's health care decisions. A third of patients in the survey said resistance from family members -- men and mothers-in-law -- and cultural traditions had prevented them from getting proper health care. Two-thirds said their husbands had decided whether they could receive prenatal care.

Forty-one percent of staff members cited family resistance -- mostly male -- as the main obstacle to their careers. A third said they had faced family pressure to stop working or change their working habits.

The maternity center bars patients' families from the facility. Many patients say family members at other hospitals have demanded a cesarean section or other procedure for them, prescribed medicine or carried in unhealthy food.

"We take their contact information and let them know if we need them," said Rabila Wafa, a gynecologist.

The hospital, which overlooks the surging Panjshir River, is a refuge from the rugged, forbidding countryside that surrounds it. The clinics are brightly lit and fastidiously clean, surrounded by apple and apricot orchards. There are pink roses and red geraniums and plump green grapes dangling from arbors.

A certified teaching hospital, the center provides a pipeline of female medical professionals in a country with a critical shortage of them. It employs seven gynecologists, 39 midwives and 78 neonatal nurses, a godsend for poor, rural women in desperate need of quality care.

But even after delivering 53,000 babies since it opened in 2003 and expanded in 2016, the center has only begun to meet the critical health care needs of a population mired in poverty and traumatized by four decades of war. The compound includes a surgical hospital and pediatric center, with 18 small clinics spread across the province.

A third of Afghans do not have access to basic health care services, according to the World Health Organization. Afghanistan has the world's highest childhood mortality rate and one of the highest maternal mortality rates.

A quarter of newborns have low birthweights, and a quarter of children younger than 5 are underweight. Forty percent of women of reproductive age suffer from anemia. This year, WHO estimated that 1.9 million Afghans needed emergency health care because of armed conflict, natural disasters and a dearth of basic services.

In the bleak landscape, the Anabah center is a welcome outpost. Throughout the day, pregnant women arrived at the hospital's security gates, transported in private cars, taxis and ambulances along a twisting mountain road that skirts the river.

In the neonatal ward, newborns gurgled in the arms of their mothers, who wore bright red headscarves that stood out against the whitewashed walls. From the delivery room came an announcement that put smiles on the faces of the nurses and midwives: Another baby had just been born. 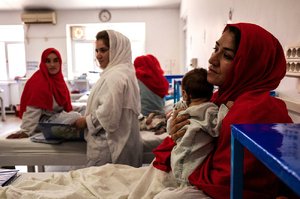 Photo by The New York Times/JIM HUYLEBROEK
A mother cares for her newborn at the Anabah center.