A land deal in the Port of Little Rock by a company that sought -- unsuccessfully -- an Arkansas medical-marijuana license has been blamed for the rising prices the port is seeing as it acquires land with the $10 million from a citywide sales tax increase voters approved in 2011.

In deals since the Courageous Ann deal, the port has struck two agreements for land priced north of $20,000 an acre.

"We believe they paid way too much for it and skewed the market," Bryan Day, the port's executive director, said in an interview.

Although the deals that will be on the books -- not all have been finalized -- total $12.5 million, they are structured in such a way that the port still has about $2.6 million available to spend on land acquisition, according to Day.

But real estate professionals retained by the port and on the Little Rock Port Authority board discount the Courageous Ann transaction as an outlier and don't expect it will establish new minimum land value going forward.

Overall, the average price of the port's total acquisitions fall well below the Courageous Ann transaction price. The the port has acquired 1,643.2 acres at an average cost of $7,608 per acre.

Greg Joslin, a senior broker with Colliers International/Arkansas, said that regardless of the prices the port was seeing for land, it needed more land available for economic development if it is to continue to grow.

The port was created 60 years ago and has grown to include two harbors on the McClellan-Kerr Arkansas River Navigation System that handle 12 million tons of cargo annually, a 20-mile rail system that handles 10,000 rail cars every year and a 2,400-acre industrial park that is home to 40 businesses employing 3,500 people.

The land program was conceived to continue expanding the port.

"We have been victims of our own success," he said. "We've been able to attract heavy industry, we have sold land tracts over that 60-year period and we worked ourselves out of a job so to speak in running out of available inventory."

Enter Little Rock voters in 2011. They approved a three-eighths percent sales tax, which included $10 million set aside for the port to acquire more land before the tax expires in 2021.

Since that time, the port has engineered more than a dozen land deals, including three last week. Many of the deals involve options to purchase the land at a future date, which allows the port to control the land without paying for it up front. When a prospect decides to locate at the port, the port can buy the land then.

The most expensive land acquisition to date in which money changed hands occurred in February when the port acquired 155 acres from the Quapaw Nation for more than $3.1 million, or $20,322 per acre. Under the terms of the deal, the port purchased 77.5 acres for $1.45 million and has an option to buy the remaining 77 acres within two years for $1.7 million.

The largest acreage acquired in a transaction came two years earlier when the port bought 318.6 acres for about $2.9 million, which came to $9,122 an acre.

Another land acquisition came in at over $3,000 an acre -- a deal to acquire 130 acres for $430,000 -- but it is in the Galloway area of North Little Rock, which port and economic development officials hope is the future home of a land-based aviation navigation aid that now sits on a 55-acre tract within the port.

The navigation aid is part of the Federal Aviation Administration's nationwide network of VHF Omni Directional Radio Range stations -- commonly called VORs and is surrounded by port property. Given the sensitive nature of the navigation aid, development of the surrounding port property is constrained.

If the VOR is removed, the port can acquire the property from the FAA. An exchange for the Galloway property is likely, according to Day, opening up more than 1,000 acres at the port for development.

The port authority board last week approved a resolution allowing the port to enter into a memorandum of understanding with the FAA, which Day said would allow efforts to move the station to continue.

"We have a defined area that is driven by the proximity to the properties [the port] already owns and so it's not like we can go out and buy any property we want to buy," he said. "It is in a defined area that creates accretive value of putting things together."

The port isn't acquiring the properties by eminent domain. Kelley and Smith approach people, gauge their interest and if they don't show any, they move on.

"Some people just want to continue to farm their properties and don't want to sell," Kelley said. We've never used what I call high-pressure sales techniques."

They offer fair-market value prices and use an independent appraiser to document the price.

"That approach works when someone is willing to sell," Kelley said. "It's open and transparent and it's the same information we need to be justified to ask Bryan and the board to pay a certain price for the property."

They also enlist the port's engineering team to help value the property. Some properties include wetlands, which makes it less valuable for development.

"Our goal is to end up with ... as close to a shovel-ready site as we can," Kelley said. "Having that property read to go for an industry is one of the main recruitment tools that improve your chances of getting industry if they're interested in three or four different communities."

He said making a sale often requires multiple conversations over several years with property owners who may not be willing to sell the first time or the second time they are approached.

That happened with one of the properties the port authority board agreed to acquire last week.

It involved a 120 acres owned by the Raines, Toney, Baugus Estate, which was first approached several years ago before, Joslin said, "everything finally came together."

The port agreed to pay $378,000 for the property, or $3,150 an acre. It included several acres of wetland and had other issues, such that the port won't close on the deal until "positive findings of various due diligence activities, including environmental, boundary surveys and determination of clear title," Joslin said.

Another 120-acre property wound up in control of the port through a different arrangement.

All three deals were well off the price of the Courageous Ann property.

"That's [only] one indicator of the price of the property and the property next to it," Kelley said. "One sale does not define a marketplace. It takes a series of sales to assign a true value. But it probably was a significant enough transaction that it attracted notice."

It will take some time before the true value of the $10 million investment can be fully determined. It will happen when a significant new industry decides to move to the port because of the available land, Kelley said.

"The results 10 years from now will be obvious," he said. 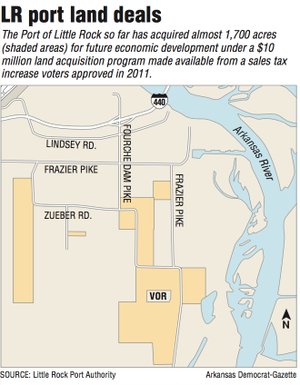