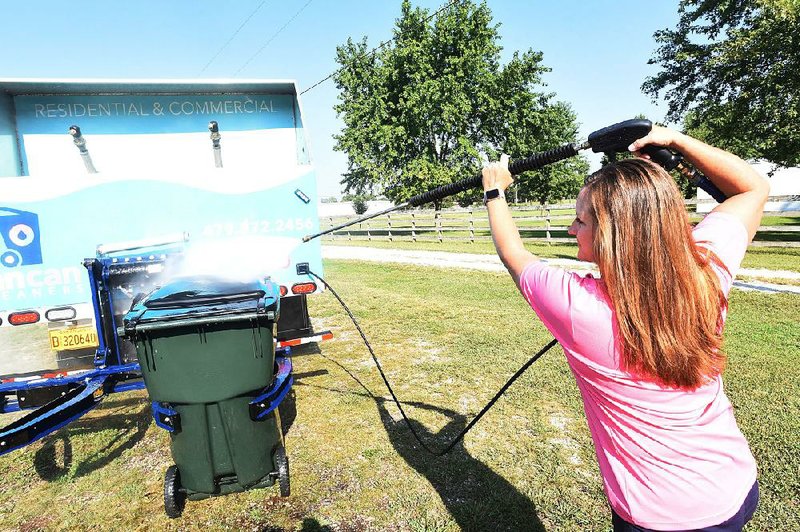 Heather Reynolds of Lowell power washes the outside of a trash can last week. Her business, Can Can Cleaning, has been up and running for about six months, washing residential trash bins and recycling containers. ( Flip Putthoff)

For Heather Reynolds, the owner of Lowell-based Can Can Cleaners, every dirty trash container in Northwest Arkansas means a potential customer.

Her new business has been running for about six months and offers no-muss, no-fuss cleaning of residential trash bins and recycling containers on a one-time basis or as a regularly scheduled service.

The process involves a large truck with a self-contained cleaning system including 500 gallons of water that is dispatched to the customer's home. The can is washed with high-pressure water heated to 180 degrees using no chemicals and comes out sanitized and fresh smelling, according to Reynolds. Dirty water is stored in the truck and properly disposed.

Reynolds, who has always wanted to be an entrepreneur, found the concept for her business while searching for an idea for an enterprise that would work well in Northwest Arkansas. She saw at-home trash can cleaning services were big in Europe and catching on in other parts of the United States but even better she hadn't seen a similar operation in the region. She and her husband, Kyle, polled friends and neighbors about the idea and most seemed to think it would do well in Northwest Arkansas.

The idea of having low-cost and predictable overhead, mostly in the form of the truck used to wash the bins, and having the ability to expand quickly by adding employees or additional trucks as needed was appealing.

Reynolds said her market research indicates there are more than 200,000 households in the Northwest Arkansas metropolitan area and each of them is a potential client.

The waste collection industry in the United States is expected to see revenue of $52.9 billion in 2019, according to research company IBIS World. Residential waste collection makes up 42% of that figure. The National Waste Disposal Association, which represents 700 members in the private waste and recycling industry said its members haul 258 million tons of waste each year.

Wheatly said he has heard of Can Can Cleaning and thinks it's an intriguing idea that provides a useful service that could really catch on in the area.

"Some people put everything in a bag that goes in their trash can -- others don't," Wheatly said. "So some cans are spotless, others are filthy."

Reynolds credits getting her business started off on the right foot to the Arkansas Small Business and Technology Development Center. In 2018, the organization helped obtain more than $90 million in capital funding for small business owners across the state who then created nearly 900 jobs.

Reynolds said Lori Leiblong a business consultant at the center's Northwest Arkansas location in Fayetteville, helped her do her research, create a business plan and financial projections and nail down a small business loan to get her business off the ground.

Leiblong said while Can Can has a unique business idea, that has the benefit of no competition in Northwest Arkansas to date, she offers the same advisory services to all Arkansas startups and small businesses.

"We're really an open door for any type of business," Leiblong said.

Now Can Can Cleaners has more than 200 customers scattered around Northwest Arkansas -- from Fayetteville to Bella Vista -- along Interstate 49. Currently Reynolds runs the business and is the one manning the truck but said eventually she'd hire more help as the company adds customers.

Marketing so far has been primarily via social media and word of mouth. She said once she does a single trash bin in a neighborhood, it's a good chance someone there will contact her interested in the service. Reynolds said her best advertising so far has been satisfied customers.

To that end, she puts stickers with company branding on trash cans she's cleaned and often distributes door-hanger advertisements in neighborhoods where she has customers.

"I hit the streets," Reynolds said. "It's a lot of walking." 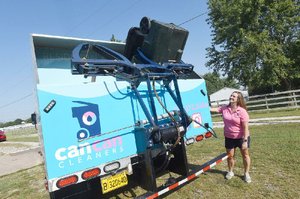 Photo by Flip Putthoff
Heather Reynolds operates a lift that raises a trash bin into a bay on the back of the Can Can Cleaners truck where heated and pressurized water cleans the can’s interior.