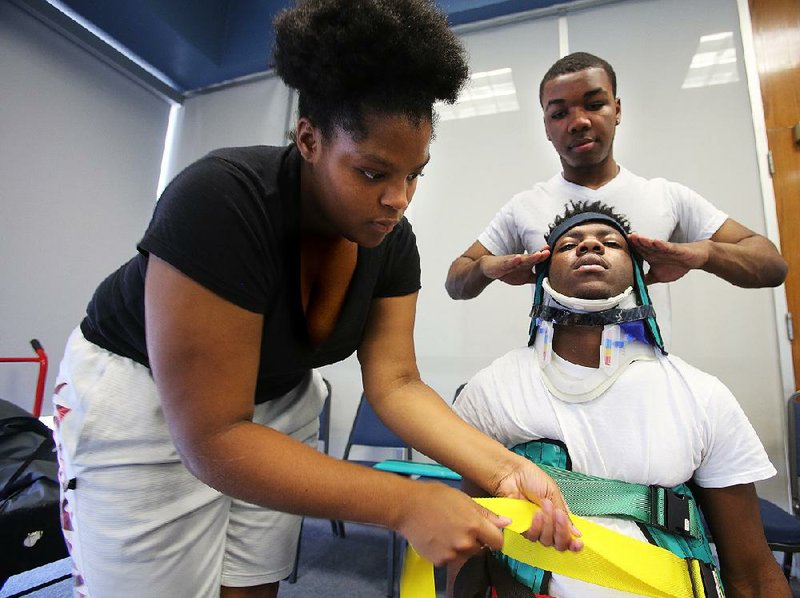 The 16-year-old was decked out head-to-toe Thursday in four layers of firefighting gear, and in just 39 seconds, she'd broken the class record for fastest "donning" at the Metropolitan Career Technical Center's emergency medical services class.

The class was the first of its kind in Arkansas when it began in 2012 and, seven years after its inception, instructor Teresa Harper said the program is still opening doors for students and filling a gap in the community.

"What makes this program awesome is if they want to become an EMT, that's great, but it also opens the door to 26 other careers for these kids," Harper said. "And we are critically short on police officers, firefighters, doctors, EMTs and nurses, so this is really excellent for the community as well as for the kids."

When asked how she got so fast at donning firefighter gear, Denton smiled and shrugged, still a little out of breath.

Harper's classroom looks more like the inside of a fire station than a school building. One wall is lined with jackets, pants, boots, heavy helmets, and other equipment. There are Kendrick Extrication Devices -- braces used to immobilize the spine during vehicular crashes and other emergencies -- as well as CPR dummies and oxygen tanks organized across the concrete floor.

In an adjoining room, students exercise on stair steppers three days a week, test their strength with a sledgehammer and practice removing ceilings with long pike poles.

[Video not showing up above? Click here to watch » https://www.youtube.com/watch?v=_xvh6ciPDVc]

Students who finish the two-year program could be hired directly after high school as EMTs, or the schooling could be a leg-up for students looking to pursue a different career in the medical field, Harper said. The students complete 14 certification tests in skills ranging from CPR to measuring blood pressure and pulse, and learn human anatomy and physiology alongside technical skills. Completing the class also earns the teens six college credits.

"They learn to do everything to keep someone alive," Harper said.

The program is open to any sophomore, junior or senior in Pulaski County, regardless of the school they attend or if they're home schooled, Harper said.

"Students do internships with fire departments, so they're actually on the firetrucks and working firsthand," Harper said.

"Not only does it give them experience, but when they go to apply later, they may already have contacts," Harper said.

Melissa Peabody, a firefighter in the Little Rock Fire Department's communications outreach division, said the emergency medical services class exposes a wide range of students to the possibility of becoming a firefighter.

Peabody said she may never have considered being a firefighter if her father hadn't been one, and few women apply to become firefighters even now.

"We never have a shortage of applicants, but we consistently have a shortage of minority and women applicants," Peabody said. "We want to make sure other demographics at least think about the job because we want our department to look like our community. ... We want people to know we don't care what you look like, you just have to be willing to walk into a fire."

All firefighters must also be credited EMTs, Peabody said, so students in Harper's class will have an advantage over other applicants.

"I had no idea I would be doing medical calls when I came on," Peabody said. "I thought I would just be fighting fires, but that's not it at all."

In class Thursday, students swore they'd beat Denton's record, laughing and teasing one another about who could don the gear the fastest. Despite the competitive atmosphere, 17-year-old Naja Lowe said students help one another master more difficult concepts.

"I think it's helped me with leadership," Lowe said, who is in her second year of the program. "I'm teaching first-years [students] and some second years now."

Lowe, who wants to become a physical therapist, said she thinks she'll already have mastered some of her early-college curricula because of the emergency medical services program.

"I helped my mom recover after her surgery, and I knew I wanted to be in the medical field," Lowe said. "I want to help people."

Even for students who do not eventually work in the medical field, MEMS executive director Jon Swanson said the emergency medical services program builds a better, more informed community.

"We are very much supporting and in favor of expanding the public's knowledge as a whole as to how to be a first responder," Swanson said. "... In a situation like a car wreck, or a tornado, or a shooting, the more people who know how to use tourniquets, CPR, and are willing to do that, the better the outcomes will be for people."

Swanson said the ability for citizens to be able to provide rudimentary first aid is so important that MEMS provides free training in tourniquets, CPR and other life-saving techniques.

MEMS, which is the sole ambulance and first responder service for much of central Arkansas, trains its EMTs and paramedics in-house, Swanson said. MEMS also requires several years of first-hand EMT experience before hiring.

Students in Harper's class who become EMTs with other ambulance services right out of high school will be able to start earning that experience quickly, he said.

"It takes a very special person to be able to do this because of the incredible responsibilities of the role," Swanson said. "When you respond to a call -- whatever it is -- you have to take care of it."

Harper said she's teaching her kids to do just that -- see, identify and address a problem.

Harper grew up in North Little Rock, but moved away after majoring in molecular biology at a joint program with the University of Arkansas at Little Rock and UAMS Medical Center. For nearly 20 years, Harper lived in Texas, Milwaukee, Maryland and Bermuda, but decided in 2009 it was time to return to Arkansas.

"I felt like I wanted to give something back to the community that gave so much to me," Harper said.

Between her summer STEM classes, robotics workshops, the EMS classes and her after-school tutoring, Harper said she feels she's getting to contribute to a generation of new scientists, doctors and first responders.

"It takes a lot of my time, but the kids deserve it," Harper said. "They deserve us, and they deserve every opportunity."

Harper said all children who grow up to work in their hometowns care about their neighborhoods, their friends and the well-being of their society. As her students grow up and out of her unorthodox classroom, Harper said she hopes they stay close and make a difference.

"I'm just really happy we get to send these kids out and they get to help their community," Harper said. "I really think there's nothing these kids can't do." 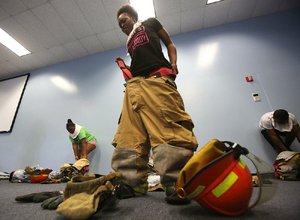